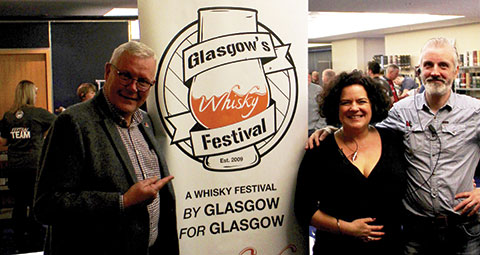 WHISKEY or whisky, however you choose to spell it, there has never been more interest in a drop of the amber nectar than there is today. And whatever variety you prefer, the product on offer has never been more varied, more extensive or more available. Scotch, Irish, Japanese, Indian, Welsh… even the English are getting in on the action. Yet while that sacrilege may prove a bridge too far for most whisky buffs, one of the most authoritative and passionate voices on the whisky scene in Scotland is firm in his belief that when you take it a nip it’s not about the name, the brand or the reputation—it’s all about the taste.

“Learning to appreciate whisky is like going on a journey,” Paul McDonagh (above left) of the Bon Accord in Glasgow explained.

It’s a journey Paul knows well, having started on it himself many years ago as he looked to bring the best to his patrons. Now the journey has brought him to the Bon Accord, where for the last sixteen years he has turned the pub from a well known Glasgow ale house into a globally recognised whisky venue, and one of the city’s most celebrated pubs.

Running whisky events, he has brought his own passion and knowledge to scores of patrons, educating complete novices about what to look for and how to taste it, supplying whisky buffs with drams they never thought they would taste and even provoking Scotch die-hards with Irish whiskey tastings to try to broaden their horizons. Now with an online shop, and finding himself on the tourist trail of his home city, his missionary work has gone global, preaching the good news of whisky to a world audience.

We sat down with Paul to get his take on the liquid which holds such power over its followers, easing into a club chair in the back of the Bon Accord and sitting back to hear him hold forth on his favourite topic.

“There are no rights and wrongs and the taste is all up to the individual,” he said. “Everyone’s palate is unique to them, so when ten people taste a whisky and nine taste one thing, it doesn’t mean the other person is wrong for tasting something different. It’s about you going on a journey and searching out the tastes and flavours you enjoy.

“Once you start off your life is never the same again. You can drink one product for years and never even think about why you like it, but once you’ve been shown how you never look back. That’s why people come back here, because it affects the whole atmosphere of the pub.”

For many it can be daunting and for many others a nip can be more about the effect than the taste, but having seen how his own understanding of whisky has developed Paul knows that anyone can experience the same, and having had the best seat in the house to watch how customers react he knows the response the public give when they have the chance explore new things.

“I’ve been in the pub trade for years and from running a few successful pubs I knew that variety and premium brands were the key,” he reflected. “I remember taking over pubs that had two whiskies on the gantry, and trying to increase what we could offer.

“Sometimes the breweries were against it, saying it wasn’t that kind of pub, and put a limit of maybe 25 different whiskies on what we could offer, but in those pubs I made sure I offered 25 different whiskies. People started to know that it was a pub where you could get a wide range of quality whiskies and we won customers.

“You can come in and get a half for £3.50 or you can get one for £900. Nowhere else has that sort of range, and that’s why we have become known across the world as one of the great whisky pubs.”

Whisky’s image means that a quality whisky experience is often hard to offer for many pubs. Your enjoyment of it depends on who is sitting at the next table, who’s serving you, what the music is like. As with all social experiences, drinking a nice whisky can be derailed by the unexpected and unwelcome influences of other drinkers.

“You can sit in here with a nice whisky and relax in a nice environment” Paul says of the pub he has transformed. “And that all comes from the relationship people have with their whisky. I don’t want to be serving someone who has had one too many and you’re left cleaning up after them.

“We want to be responsible and offer our customers the best in everything—the best drinks, the best staff, the best food, the best atmosphere. That’s the whole point of the trade. You’re a salesman, and you’re there to satisfy your customers’ needs.

“People who come here have probably walked past ten other pubs through town to come here. That doesn’t happen by accident, so we have to respect that choice through what we offer them.”

The range on offer can also take people by surprise. The sums whiskies can fetch at auctions or on sale directly from the distilleries are well known. Figures stretching well into the thousands are common, but the ordinary person sitting in a pub doesn’t expect a whisky costing many thousands to be sitting behind the bar right beside their old favourite costing a just a few pounds for a dram.

“Customers go on a journey with their whiskies, but so do you as a retailer,” Paul said looking back on the steps he took along the way. “Previously I had never broken the £1000 barrier on a bottle of whisky, and I knew that I would have to do that in order to get the range we wanted to offer.

“Financially and mentally it was a big barrier to break, and in the end we jumped straight to a £2500 bottle, then £3500. It was obviously a slower return on the investment we made, but it helped us develop what we were offering and anything that brings someone in your door is valuable for a pub.

“I love the whole industry, the relationships you have with your customers, the exchanges you have every day when their coming in or leaving the pub. Whether its with whiskies, or ales, or gins we’re guiding people along that journey and I always want to offer them the best.”