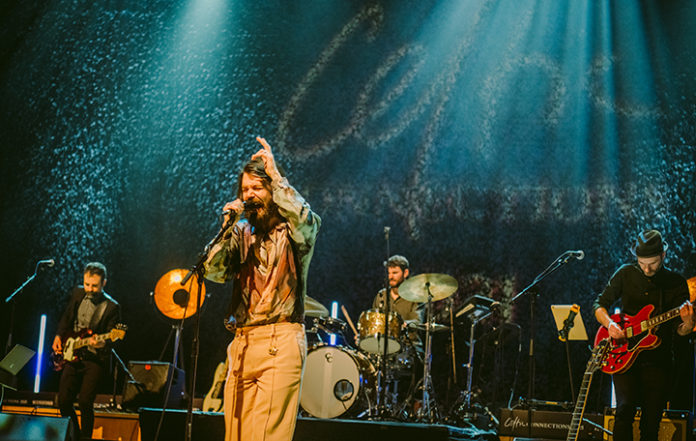 IT WOULD have been easy to cancel or postpone this year’s Celtic Connections given the current climate, so many other events have fallen by the wayside already, but Donald Shaw and his committee decided to proceed with Glasgow’s annual winter musical tonic.

Using an online digital platform and working in partnership with BBC Alba and Celtic FM the annual folk, roots and world music festival went ahead, with support and funding from the charity Glasgow Life, Glasgow City Council, Creative Scotland and the Scottish Government EXPO fund.

In this unusual year Celtic Connections—which would normally expect to attract over 100,000 attendees to Glasgow—created a digital programme to allow a global audience to access pre-recorded performances, available either by purchasing an individual ticket for a digital event or via a festival pass, which allowed access to gigs and events throughout the 19-day period. Highlighting the popularity and reach of this event, prior to the opening night launch, passes had been purchased in 35 countries around the world.

In previous years Creative Director, Donald Shaw, has featured over 300 events, showcasing exceptional talent from home and abroad. At the same time he managed to maintain an ethos of friendship and collaboration as well as creating imaginative programmes and mixing cultures and genres, drawing on world class performers and putting musical Glasgow on the map.

“There are situations that you will see where people are playing that you might never see again, or if you do, it’s because it worked here first.” Donald said.

Although the prevailing circumstances forced a restricted programme, 2021’s range and array of talented performers was outstanding.

Versatile and engaging singer songwriter from Lewis, Josie Duncan performed a number of her own songs in a New Voices slot—ably accompanied by some of Scotland’s most accomplished musicians, including Craig McMahon on keyboards and Andrew Cowan on guitar. She continues to enhance her reputation as a performer and composer. A graduate of the Royal Conservatoire of Scotland she is equally at home singing in English, Scots and Gaelic.

Although there were no Gaelic songs in her concert, there was ample opportunity to sample performances from our hugely talented Gaelic musicians and composers. South Uist’s Kathleen MacInnes performed a fine set of songs at the City Halls accompanied by Mike Vass and Mhairi Hall. On a great soulful rendition of A Thighearna Dhia she was joined by Ireland’s Michelle Burke.

From the Taigh Chearsabhagh Museum we had a special evening of North Uist music, with Ceol Uibhist a Tuath celebrating the island’s rich musical talent and heritage. Presented by the legendary Duncan McKinnon, it was one of a number of programmes broadcast entirely in Gaelic.

Glasgow-based Skye singer Deirdre Graham shared a bill with Blazin’ Fiddles and Galician Xabier Diaz, and there were appearances by Siobhan Miller and Manran—and of course, no such event is complete without the talents of Karen Matheson, who shared an evening with the excellent Blue Rose Code.

There was a special celebration of the legacy of Gaelic poet Murdo McFarlane in Bard Mhealboist. Presented by Ceitlin Lilidh and featuring an appearance by Donald Shaw, a number of well known Scottish singers paid a fitting tribute the Lewis man. An excellent concert concluded with a fine rendition of Canan nan Gaidheal.

Global Reach
Normally international acts would find themselves travelling to Glasgow for Celtic Connections, but one aspect of this global digital format is that we in Glasgow get to see performers in their own environment.

The Womanly Voices of Jodhpur RIFF filmed their performance outdoors at dawn, as the sun rose above the mountains in the background. The line-up included Sumitra Das, Sundar Rao and her daughter Ganga Rao and Mohini Devi, also her daughter, Susheela, and they produced a fine set showcasing Indian traditional and folk music in the most spectacular vista.

Bassekou Kouyate, renowned exponent of the Ngoni African lute, joined us from West Africa and Sona Jobarteh from Gambia shared a bill with rising star Georgia Cecile and The Fergus McCreadie Trio.

Danish trio Dreamers Circus recorded a number of their genre defying instrumental music for the festival as well.

We were also treated to a superb event of Quebecois folk music on a bill comprising of Vent Du Nord, De Temps Antan and Grosse Isle recorded in Quebec—an evening of traditional and original compositions delivered with the usual Gaelic charm and wit.

Many of Glasgow’s iconic venues enjoyed a brief lease of life for the event. There were performances in the City Chambers, Royal Concert Hall, The Old Fruitmarket and Kelvingrove Art Galleries and Museum—the latter venue providing an atmospheric setting for the concert of Duncan Chisolm.

One of the finest interpreters of Highland fiddle music, he relished the opportunity to link up with old friends Hamish Napier, Jarleth Henderson, Innes Watson and Donald Hay and accompanied by the Scottish Ensemble they staged a superb concert. The set list included a number of tunes from the Sandwood album and Donald Shaw joined them on his composition Constellation.

We were able to remove the restrictive shackles of lockdown and go on a musical journey of jigs, waltzes and well known Irish songs that would have delighted and tugged at the hearts the Irish diaspora. Evoking the perennial story of the Irish traveller wistfully recalling home they opened with Frances Fahey’s Galway Bay, with Don Stiffe on vocals. We glimpsed the Catskills in a wonderful Joannie Madden waltz, Bruce Foley was excellent with his version of Row On and we roamed over the beautiful hills around Glenties as Kate Purcell sang Maurice McGrath’s tribute to the Donegal landscape. All the while it interspersed with classic Irish dancing from David Geaney and Seamus O’ Flatharta, the latter also performing an emotional a cappella version of Saileog Rua.

Hopefully this time next year we can all reconvene in Glasgow with a full house in the concert hall.

The final Saturday night saw the appearance of Roddy Hart and the Lonesome Fire in this year’s Roaming Roots Review, with an all-star line up of guests.

The apt theme for the concert was hope and inspiration, and Roddy charged his guests to select a song which reflected this. Lau, joined by Rachel Sermanni, opted for Neil Young’s Rockin’ in the Free World and the Brewis brothers of Field Music covered Money’s Too Tight to Mention. Ricky Ross contributed a great rendition of There’s Gold in Them Hills before the ensemble gave us a rocking version of The Traveling Wilburys’ End of the Line. Everybody Has Got To Live by Arthur Lee was the soulful contribution from Dumfries singer songwriter Belinda Odenyo Onassis, while Strathspeys’ own Rachel Sermanni selected Elbow’s One Day Like This. Biffy Clyros’ Simon Neil (above) joined in with a superb rendition of Machines. The set proved to be a thoroughly entertaining and uplifting event.

This Celtic Connections has been a triumph for Creative Director, Donald Shaw, and all concerned and a timely boost not just to those of us fortunate to get a festival pass and sample the entire offering, but also to the excellent musicians and technicians taking part. It was a joy to see so many performers doing what they do best creating and sharing and entertaining.

With all the uncertainty over how long we will be under current restrictions surely Celtic Connections’ innovative and ground-breaking initiative, harnessing digital technology, must be considered by others in the entertainment industry to re-connect performers with their audience and create a new working environment for venues and industry professionals.