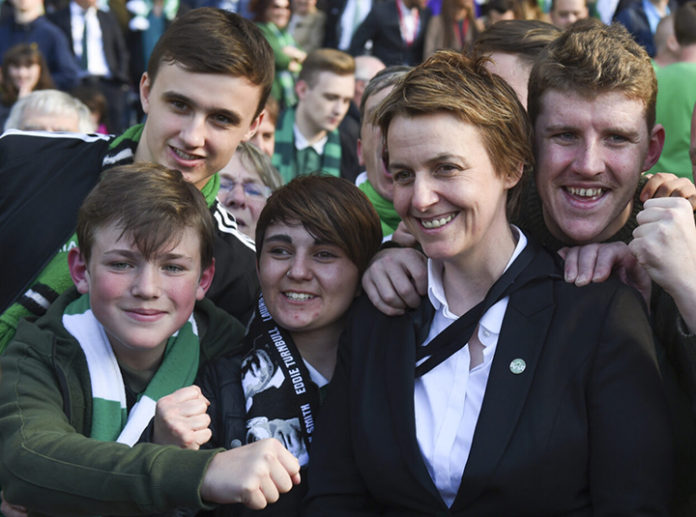 SIR Tom Farmer is the father of modern Hibernian, having taken the helm at the club in 1990/91 when it was near bankrupt, playing in a charming, but dangerously antiquated stadium and long starved of on-field success.

When he sold the club to Ron Gordon in 2019, he handed over a very different business to the one that he had rescued 28 years earlier.

By 2019, Hibernian had won three major trophies, finished third in Scotland’s top flight four times and had played numerous European ties, as well as having built a new training centre and upgraded Easter Road to being a truly modern sports arena.

However, the mother of that famous football club’s rebirth in recent years has been Leeann Dempster (above).

The rebirth of Hibs
When Leeann came to Hibernian in 2014, she arrived at a club in crisis and in moderate decline, with an angry fanbase which felt that it was never listened to and with relegation looming. The average home crowd at Easter Road between 2011-2014 was around the 10k mark—the club’s last three seasons in Scotland’s top flight have averaged around 17k, the highest for a three year period since the late 1950s.

When Leeann came on board, the Hibs fans finally got a public figure at the club who would speak for Hibernian and would engage with them. In preceding years most, if not all, of Hibs’ media communication was done through simple press statements, which is fine for the 20th century, but antiquated in the 21st. In the aftermath of relegation under Terry Butcher in 2014, under Leeann’s stewardship the fans were re-engaged with and were listened to, and things began to change. Using a combination of off-field and PR reforms coupled with a refreshed team on the park, Hibs fans started to smile again.

Two results critical to Leeann’s early days at Hibs were crucial in winning the fans back quickly. These were a courageous League Cup quarter-final penalty-shoot out loss at home to Dundee Utd in October 2014 and a 4-0 humiliation of Rangers at Easter Road at Christmastime 2014.  Though season 2014/15 saw Hibs fail to be promoted under Alan Stubbs, the extraordinary circumstances of that campaign—with Hearts and The Rangers also in the division—meant that campaign was still largely a positive one. The rot had been stopped.

The following season brought more disappointment regarding promotion as Rangers romped to the title and Hibs lost out in the play-offs, but of course, by that season’s end the league was almost an irrelevance to Hibbies, as Stubbs’ side had won the 2016 Scottish Cup, beating Rangers 3-2 at Hampden to end a 114-year spell since the club had last won that trophy. Hibs might’ve had an historic cup-double that season, too, had Stubbs not taken Kevin Thomson off in the League Cup Final loss against Ross County. Maybe…

Leeann brought Neil Lennon to Hibs in the summer of 2016 and under the Irishman the Hibees easily won promotion back to the top flight in season 2016/17, then went on to have their best season in that top flight in the modern era in 2017/18. By the time Lennon left Hibs in early 2019, his successful time in charge had given Hibs fans their mojo back, while Leeann and her backroom team had helped to solidify the business and overall product side of Hibs off the park. Hibernian was reborn.

There were minor hiccups, of course, most notably the disastrous appointment of Paul Heckingbottom as manager, but that matters not now.

Such was the value that Leeann helped to add to Hibernian FC in her first five years that Ron Gordon bought the club in 2019. Those are Leeann Dempster’s two main contributions to the Hibernian cause, she added value and she helped to bring success. Everyone at The Irish Voice wishes Leeann all the best in whatever role she undertakes next. She may have been a Copeland Road Bear in her younger days but she’s now forever a part of the Hibernian story.

Meanwhile, Jack Ross’s Hibees sit fourth in the League Table. After their embarrassing Halloween defeat to Championship minnows Hearts at Hampden in last season’s Scottish Cup semis (that’s 2020 for you) , the green jerseys lost 2-0 to Aberdeen at Pittodrie in the league. Ex-skipper James McPake’s Dundee side were then trounced 4-1 in the Betfred Cup at Easter Road, with goals coming from Mallan, Nisbet, Gullan and Halberg.

Next up, struggling champions Celtic came to Easter Road. Second half goals from the impressive Jamie Murphy and from Kevin Nisbet had Neil Lennon’s men almost on the ropes, in a match which the away side dominated both in possession and in goal attempts. The Hibees couldn’t hold out, though, and the Celts nicked a 2-2 draw thanks to late strikes by Edouard and Laxalt.

Yet another 2-2 home draw with St Johnstone followed—the Hibees haven’t beaten the Saintees in Leith since 2012. Hibs had to come from behind twice, both goals coming from Paul McGinn, whose ex-Hibee brother, John, recently helped Scotland to qualify for their first major tournament since France 98.

As Hibs ran away with their Betfred Cup group and were thus seeded, there was a chance that they could end up playing Dundee again and that’s exactly what happened in the knockout phase. This time the Hibees went through 1-0 against the Dees at Easter Road, a solitary Murphy strike doing the sufficient damage on that occasion.

Hibs will take on Peter Grant’s Alloa Athletic in the Betfred Cup quarter-finals at Recreation Park—The Wasps having disposed of Hearts in the last round. Hibernian are but three matches away from League Cup glory.