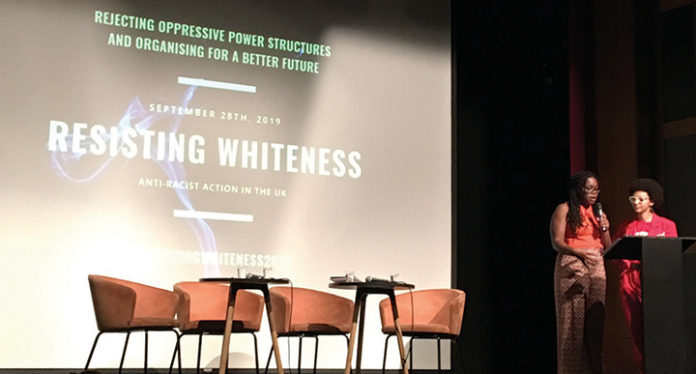 THE place of white ethnic minorities in Scotland—including the Irish community—was widely examined in the aftermath of the controversy surrounding Resisting Whiteness, a conference held at Edinburgh University.

The event (above) was planned by anti-racism activists, but nevertheless had spaces segregated by colour and prevented questions from white attendees apart from at certain parts of the conference.

The conference was criticised for excluding white people and voices from the discussion, and the University of Edinburgh themselves confirmed that the had expressed concerns to the organisers ‘about certain aspects of the format of the event and they are revising their ‘safe space’ policy for the conference as a result.’

Among those who criticised the event was anti-racism campaigner Jane McColl, who called Resisting Whiteness ‘blatantly racist.’

“It sets back the battle to achieve equality and fairness by decades, all because of the actions of a tiny group of extremists, whose perverse sense of logic has led them to belittle white people, not by who they are as individuals, by merely because of their skin colour,” she said. “Imagine if this event was called ‘Resisting Blackness’ and non-white people were told they could not ask questions, nor access a room because they were the ‘wrong’ colour.”

Letter
The aftermath of the controversy in Edinburgh saw the publication of an open letter in defence of the conference under the title of ‘An Open Letter on Race and Racism in Scotland,’ signed by a number of high profile anti-racist organisations and individuals.

However, rather than answer the fears of those who felt such a conference was counter-productive the letter only served to generate more confusion and criticism—particularly from those white ethnic minorities in Scotland who were concerned about the implication that they in fact benefit from certain characteristics.

The letter stated that despite facing issues the white immigrant communities in Scotland—of which the Irish community is the largest—nevertheless are advantaged, and see racism decline through the generations.

“White people in Scotland have a vital role to play in creating the culture change needed to eradicate racism,” it said. “However, just as there is a time for speaking out and challenging racism, there must be time for listening, learning and reflecting on the experiences of those who face racism. These discussions may be uncomfortable, but they are necessary. These discussions need to recognise that whilst discrimination and xenophobia faced by white migrant groups must be tackled, for most of these groups, this will reduce over generations. The perception of whiteness will eventually confer an advantage; at the very least, the advantage of freedom from the impact of skin colour based stereotypes, prejudice and hatred.”

Responses
The generational improvements and advantages felt by these groups must come as a surprise to the Irish community, who are still—more than 150 years since the first major waves of Irish immigration to Scotland—disproportionately likely to experience poverty, ill-health, poor housing and imprisonment and greatly over-represented as victims of hate crime.

The open letter sparked a response from Bemis, who detailed the position of their organisation and its diverse membership in response to the positions put forward by a host of high profile individuals and groups.

“There is no legal definition of ‘migrant’ in UK Human Rights, Equality or Criminal law,” Bemis wrote. “Thus, we as well as our diverse membership, reaffirm that it is not within anyone’s gift to

re-classify or derogate the rights of some multi-generational racial minority communities, who face racism in Scotland as ‘xenophobia faced by white migrant groups.’

“In addition, it is also entirely counter-productive and completely unnecessary in progressing race equality to assert without any evidence that: ‘The perception of whiteness will eventually confer an advantage.’

“The Jewish and Irish communities have been in Scotland for over 200 years and Scotland’s Gypsy Travellers for over 800 years, yet they are readily, annually and easily identifiable in race hate crimes and issues of racial inequality.

“Race equality challenges continue to develop in relation to Scotland’s Roma community. Between 2003/04 and 2013/14 racially aggravated hate crimes within which the victim [or] complainer was ‘Gypsy/Traveller, Polish White and Other White’ increased by more than 400 per cent.”

In response to questions from The Irish Voice, Show Racism The Red Card—who were one of the signatories of the letter—spoke generally about the need to use education to fight racist behaviours which are nor limited to discrimination based on skin colour.

“People of all ethnicities in Scotland have a vital role to play in creating the culture change needed to eradicate racism,” a spokesperson said. “Show Racism the Red Card teaches the future generation that racism attacks not just skin colour, but religion, culture and nationality.”

Call It Out: the campaign against anti-Catholic bigotry and anti-Irish racism, however, spoke in a more forthright manner about the lack of protection offered to the Irish community by their predominant skin colour.

“Our ‘whiteness’ is no protection from the racism we face. Neither do we see ourselves in competition with any community facing racism. We see ourselves as acting in solidarity with them when we challenge racism. To acknowledge your pain we don’t have to deny ours. Solidarity.”