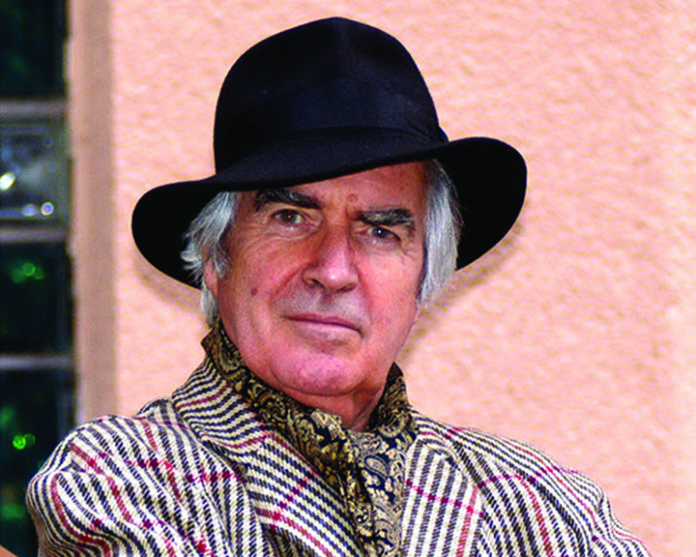 AS ELDER statesmen go, John Cairney (above) is in a class of his own. A singular talent, prolific in all his chosen fields, he is a leading figure of the cultural landscape of Scotland. With his 90th birthday next month he could have long-since embraced retirement. Instead he relishes every opportunity to express his prodigious talent. While the pace is slower these days the desire to express his artistic self is never done. And it is an expression which has come full circle.

As the winner of the Glasgow Schools Art prize John was awarded a scholarship and was set for Glasgow School of Art until fate intervened and he took the road which, quite literally, led to an unrivalled career in the dramatic arts.

“My father was a furnace-man at Parkhead Forge,” he said. “He was a highly intelligent man and a piper and a pianist. He had plans for me to become an art teacher so he was none too pleased when instead of getting off the tram to enrol at the Art School, where he had left me, I walked down to the drama college. I was later told I was the first fellow to walk in and from then on I was determined to remain first.”

John is Scottish by birth and throughout his career has highlighted the works of fellow Scots such as Robert Louis Stevenson, Charles Rennie Mackintosh and, most notably, Robert Burns. His heritage, though, is predominantly Irish.

“We were all actors in my Irish family and we had marvellous singers and entertainers so it was in my blood,” he said. “I had two wonderful Irish grannies, from Letterkenny and Warrenpoint. A little tough one, bent double most of the time, who lived in Ballieston and bossed around seven big sons, and a big tall one who lived in the posh part of Shettleston. So I looked up to one and down to the other. In the summer holidays we would land off the boat at Warrenpoint and then we’d be driven over to Letterkenny.”

Plays and passions
When his father was haranguing John for wanting to ‘paint your face and talk like a lassie,’ he could not have known how his son would become one of contemporary Scotland’s best-kent sons. Among a career of many firsts he is particularly proud to have been the first-ever Scottish actor to play Hamlet on home turf. While there have been many accolades and recognition around the world it is to his east end beginnings he often returns.

“The university gave me my degree, but it was the library and the cinema in Parkhead which brought me up,” he said. “Along with the church they were the pillars of my childhood.”

Another Parkhead passion was Celtic FC. The Sevenpenny Gate, he recalls, was the only one of his books to feature on the bestsellers’ list. Among the talented Cairneys was his brother, Jim, who was signed by Celtic as a boy and trained with them, before taking up his senior career outside Scotland. His cousin, Philip, was a Clyde FC goalkeeper.

His exceptional talent was apparent early on at Glasgow College of Dramatic Art, the drama department Scottish National Academy of Music. He would have been a deserved winner of the graduation prize. Only his ego prevented the award being given to him.

“The head told me it would be good for me in the long run,” he explained. “He felt I was big-headed enough. Quite honestly, my head couldn’t be accommodated by this table we’re sitting at. The famous Wilson Barrett Company had asked about me so it was straight from college to the dressing room in Aberdeen and I didn’t stop until I was 70.”

A love that blossomed
With a Burns Club in every major city in the world he was much in demand to perform the works of the Bard. It was in New Zealand where he met actress and scriptwriter, Alannah O’Sullivan while she was performing her one-woman show As Dorothy Parker Once Said, which was performed worldwide for 15 years after its premiere in Wellington.

Anecdotes are the stock in trade for this raconteur. How they met is one of his favourites. Alannah likes to tell the story, too.

“He was so comfortable with the house ways and his easy ad-libbing was something I hadn’t seen before,” she remembered. “One of the many things I learned from him was to simply love them for coming out to see you. I would be petrified going on stage and it was only after many years with him I learned to relax on stage.”

As an actor and performer, John had captivated Alannah. By the time she dropped him at his motel on her motorbike she had decided that as a man she wasn’t overly impressed by him. Saying their goodbyes he looked at her and told her “I see us being married between two rhododendron bushes.”

They got to know each other through the theatre community and John invited Alannah to perform with him at the Edinburgh Festival. In 1980, two years after their first meeting, they were married on Alannah’s mother’s farm, between two rhododendron bushes.

This gift of precognition he attributes to mother who was, he says, a woman of percipience and foresight, although she believed it to be more of a curse than a gift.

An artistic departure
Thirteen years of touring the world with their 23 two-person shows followed before returning to New Zealand for John to undertake a PhD on the plays of Robert Louis Stevenson.

After breaking her heel, Alannah was unable to walk for six months. Being housebound catapulted her into writing for television, which she embraced as a departure from editing for radio and her own career continued to develop. John was making annual trips home to visit his five children from his first marriage. Eventually Alannah sensed his longing for home and they returned to Scotland in 2008.

With a half-century interlude in drama it was not until his later years that he returned to painting. In 1999 he had taken it up professionally after beginning some art classes.

“It started with a lovely teacher called Anneke Lann—a Dutch woman—who said she couldn’t teach him anything but oversaw him and saw his bent for religious paintings of a crucifix and a little church and that led to the painting of his triptych of the Last Supper, which was shown in Maybole in 2009. Meeting with then parish priest, Fr Stephen McGrattan, at that event started a chain of events which led to his modern -day depiction of the Stations of the Cross and the publication of two booklets, A Glasgow Calvary and The Marian Way.

This artistic departure became possible only through the unwavering support of Glasgow businessman, Matthew Reilly, and his wife, Margaret. The introduction to Matthew revealed a new pathway which not only allowed John to pursue his latent passion, but opened up this side of his talent to another audience.

In a deliberate pun, John painted the various Glasgow crossroads such as Partick Cross and Bridgeton Cross in his Glasgow Calvary. As well as the 14 stations he added an optional 15 to commemorate the Resurrection

“I was first introduced to John Cairney after an ordination at St Mary’s Church in the Calton and subsequently met with him to learn more about this creative genius who seemed to walk humbly with his God through his art” Stephen said. “He is a lively, entertaining man, brimming with stories and anecdotes, but grounded in the love of his wife, Alannah, and family and inspired by the cultural heritage of his Catholic faith. It has been my privilege to accompany John on some of his artistic adventures over the past seven years and to help his work—particularly the faith-based side of him—reach a new audience.

“Among the highlights of my work with John are the events that were inspired by his religious series of paintings, A Glasgow Calvary and The Marian Way and their accompanying meditations. Not a single soul was left unmoved by John’s recitation of these meditations on the Station of the Cross during Lentfest.”