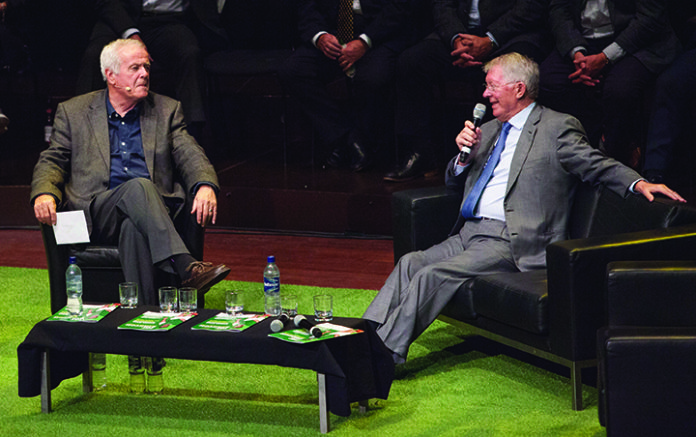 A 75TH birthday party doesn’t usually have a very momentous evening, but no-one will ever say that about the great Pat Stanton’s.

The former Hibs, Celtic and Scotland star’s 75th bash at The Usher Hall in Edinburgh was packed with Hibs fans recently for ‘A man for all seasons,’ a celebration of the big man’s 75 years on this earth organised by Paul Kane and Willie McEwan.

Pat made his Hibs debut back in October 1963 aged just 19—a match in which he scored—and then spent almost 13 years at Easter Road, making an astounding 617 appearances in the green jersey and scoring 78 goals from midfield.

A mainstay of the Hibs team for most of that time, Pat is best remembered for scoring one of Hibs’ goals in their 2-1 League Cup final triumph over Celtic back in December 1972 and for being part of the same Hibs side which a few weeks later annihilated Hearts 7-0 at Tynecastle on New Years Day 1973—the most emphatic victory in a competitive Edinburgh derby.

Pat’s spell ‘in the green’ also saw Hibs win two Drybrough Cups and one Summer Cup—both important trophies in that era, as well as starring in numerous great European nights for the Leith side.

Pat made his last appearance for Hibs in August 1976, scoring in a 4-0 friendly win over Dundalk at Oriel Park, before the great Jock Stein signed him for Celtic. Stein moved Pat from midfield to sweeper and this masterstroke revitalised the Celtic team, who won back the league title that very season and also won the Scottish Cup, defeating Rangers 1-0 in the 1977 final and thus Pat had now won every domestic honour in the Scottish game. No mean feat for a lad from Niddrie.

Pat’s stint at Celtic ended after just two years and 44 appearances due to a horrendous knee injury, which forced him to retire in 1978 after a lengthy layoff.

After cutting his teeth as a manager at Cowdenbeath and Dunfermline, he became Hibs manager in 1982, replacing Bertie Auld. Pat’s spell as Hibs manager came at a time of economic downturn in the UK and miserly spending by the club’s owners. Consequently Hibs were mediocre under Pat’s stewardship, yet that casts no shadow over his status as a Hibernian great.

His best contribution to Hibs as manager was blooding youngsters like John Collins, Mickey Weir, Gordon Hunter and Paul Kane—these four players are now Hibernian legends in their own right, partly thanks to Pat’s faith in them. He was replaced in the dugout by fellow ex-Hibs player John Blackley in 1984.

Pat is a descendant of Michael Whelehan, the man from County Roscommon in Ireland who was Hibernian’s first ever club captain, a link that Pat is proud of and that would surely have pleased Whelehan as well—two Hibs captains, separated by almost a century yet with a unique blood tie.

Though a star for Scotland and Celtic as a player, Pat Stanton will always be ‘Mr Hibs’—Hibs fan, player, captain, manager and legend. The turnout and makeup of the attendance at his birthday bash in the Usher Hall reflects this and the immeasurable esteem in which he is held by so many in football. As well as the many ordinary Hibs fanatics, attendees included: Allan McGraw, Bobby Duncan, John Blackley, Jimmy O’Rourke, Alex Cropley, Alex Edwards, Jackie MacNamara Senior, Tony Higgins, Sir Alex Ferguson(above), Gordon Strachan, Alex Mcleish and Steve Archibald, Simon Pia, John Hughes, Irvine Welsh and Derek Dick AKA ‘Fish.’ Video tributes were also shown from the likes of Stuart Cosgrove, Alan Rough, The Proclaimers and even Tam Cowan. All came along to celebrate the Hibs legend’s 75 years on this earth.

Given a standing ovation at the beginning of the night, Pat ended the evening on stage with his family and was presented with a memento Hibs jersey bearing number ‘75’ on the back, as well as a Hibs birthday cake, which the great man joked about, saying simply that he wished the cake was bigger so that everybody could have a slice. A further standing ovation brought to an end a magical and emotional evening, hosted most ably by Hibby Grant Stott.

In the true tradition of both Hibernian and Celtic, several thousand pounds were raised for two charities at Pat’s birthday bash, CCLASP and Muirfield Riding Therapy.

Following on from that hugely successful night Pat was honoured by both sets of players in a pre-match guard of honour during the Hibernian vs Celtic match at Easter Road—which ended 1-1—in what was billed as a Pat Stanton Tribute Day.

Pat received a rapturous applause from the entire stadium both before the match and during a half-time appearance. There were also collections taken up for the two aforementioned charities on the day too.

Ian Colquhoun is the Hibernian FC columnist for The Irish Voice