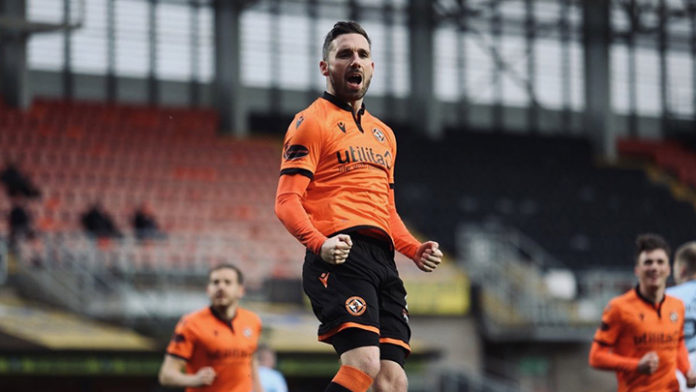 DECEMBER is always a busy month for football and this year will be no exception with no fewer than six league games on the horizon for Dundee United.

With 15 games already played, statistics show it’s all pretty nip and tuck with five of each of wins, draws and losses to date.

Micky Mellon’s boys will no doubt be aware of the task that awaits them though as results show they have lost to all but one of their of their upcoming opponents already this season —Hibs, Celtic, Rangers, Killie and Livingston.

United can go into these fixtures bolstered by the fact that they are unbeaten in their last five league games—seven in all competition—with a couple of good home wins thrown in there too. So the signs are encouraging with the team currently residing in fifth place in the Scottish Premiership at the time of writing.

After a spate of no fewer than four 0-0 draws, Arabs understandably questioned the ability of the side to find the net or even hit the target. Despite having great possession, sideways football and a very busy Benji in nets was steadily becoming the norm on a weekly basis. As with most clubs, many fans took to social media venting their anger and frustration with these results and performances. The one positive—pointed out in the last issue—though was even if it is not pretty to watch, United weren’t losing and taking points away from home in the top level is never going to be easy. In fact you could go as far as to say, these are games United would well have lost in the past few seasons.

Nevertheless, it would appear the jury is very much still out on Mellon and his style of play, with some calling for him to be axed even at this early stage. Looking back over the last few seasons with the coming and goings of managers at Tannadice though, this would have to be dismissed as knee-jerk to say the least. Continuity and stability is what the club is aiming for and cementing its status as a top flight club from here on in has to be the priority. In that respect, Mellon and the United board seem to on the right track, so judgement can maybe be held off for a while yet.

If the Tangerines’ last game at home to Hamilton is anything to go by, the forwards now seem to be finding their feet with great link up play from Shankland, McNulty and Nicky Clark coming to fruition at last. Clark—son of former Hearts manger Sandy—has certainly answered his critics moving on to nine goals for the season so far. What is surprising about him, is that he is playing his first season at the top level even though he has been around for ten years or so. Prior to joining United, he spent most of his career at Rangers and Dunfermline in the lower divisions. His fine finishing has impressed Mellon who hailed his composure and calmness in front of goal. This was especially evident with his sublime winner against the Accies. Once deployed in a deeper role by previous managers, Mellon seems to have been able to get the best from Clark by moving him up top, where he should be a handful for any defence on his current form.

The same, unfortunately, cannot be said for Lawrence Shankland who, despite being part of the Scotland squad that travelled to that infamous game in Belgrade, has only netted twice so far. Injury has somewhat hindered his development, but there’s a long way to go in the season and hopefully he will end his barren spell soon.

United have faced major financial difficulties this season since the Covid-19 outbreak. Chairman Mark Ogren pointed out recently that finances were down a whopping 40 per cent on last season and reports of pay cuts or deferrals for players wages have been doing the rounds in the local media of late. It would appear there is no agreement as yet and it remains unclear what the upshot will be at this moment in time.

Ogren was quoted as saying: “Everything is on the table, apart from redundancies,” which is good news at least. United, it seems, have not budgeted beyond October for the lack of fans in the stadium and will be hoping that there will be a change in circumstances in the coming months. United, like everyone else, will be hoping to have their faithful supporters back cheering them on home and away as soon as it is possible to do so.