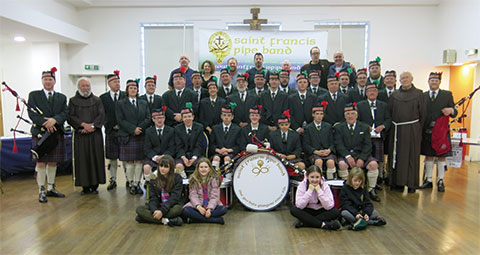 Fr Edmund Highton was the principal celebrant at the special mass, alongside Fr Anthony who has been involved with the group for the last 40 years.

The group has brought the joy of music to adults and young people alike, and preserved the spirit of charity and goodwill in honour of its namesake, St Francis of Assisi.

The event ended with the pipe band (above) marching back to St Francis’ Church Hall, where they entertained guests at the annual Bridging the Gap Christmas party.

Fr Highton presented each individual band member with their new St Francis inspired kilts, which celebrate the unique and continuing relationship between the Franciscans and Scotland, which has survived for more than 800 years. Each colour of the tartan symbolises an important feature in the bands history. The brown represents the colour of the robes of the Franciscans; the blue is the St Andrew’s Cross in the saltire; the green reflects St Francis being the patron saint of ecology and being in touch with the natural world; the white is the three lines depicting the knots of the Franciscan friars robes; the purple is for the indigenous Scottish heather and thistles and the red symbolises the blood and the suffering of Christ.

Anthony Ó’Doibhailein, one of the band’s organisers, said the anniversary mass and presenting of the tartan was an emotional event for all involved.

“It is with some pride that the band can wear a tartan which truly reflects more of the story of its origins and so continue to play a part in the ongoing connection between the Franciscans and Scotland.”

Despite the band’s uniform being overhauled with the tartan launch, the band’s key principles stay the same. It will continue to be self-funded and not charge for uniform or fees for band members.

The band has taken part in some very special performances, including playing for Pope John Paul II at Murrayfield in 1982, and playing when a relic of his was brought to Scotland in 2015.

Fr Leonard, of St Francis’ Church, started the band in 1926 as he wanted to give the young boys of the Gorbals something which took them off the street and instilled some discipline into them and be enjoyable at the same time. In the heyday of the Gorbals, the pipe band was not just important to the church but also to the local community.

The group also celebrated Christmas with its traditional parade, which seen the band play throughout the streets of the Gorbals on Christmas morning.