PLAYWRIGHT Gerry Cunningham is looking forward to unveiling his story of the love affair at the heart of the Easter Rising to a Glasgow audience this Easter Monday—and his play Blood Upon the Rose is already looking at being a sell-out.

While the focus of the play is the relationship between Joseph Plunkett and Grace Gifford, buried in the heart of Cunningham’s play (right) is a scene featuring James Connolly, the most notable representative of Scotland’s Irish community, and the other leaders of the Easter Rising—who viewed him as a potential threat to their plans.

“Scotland’s most influential figure in the Rising was of course Edinburgh-born James Connolly,” he explained to The Irish Voice.

“Born of Irish parents he was a Scottish socialist, before moving to Dublin to organise the Trade Unions there. It was here he formed the ICA Irish Citizens army after the RIC had brutally beaten protesters during the Lock-out and general strike in 1913.

“In our show, we focus on Connolly in a major scene and how his army threatened to disrupt plans for the Rising. Connolly wanted to take his own ICA out to attack the forces as soon as he could. He had only an army of 300. Pearse and the others knew this would be disastrous, as it would only be a token gesture without any chance of success, and in fact would severely disrupt the plans of Pearse and the IRB who hoped to mobilise
14,000 men.

“Connolly was taken to the Dolphin’s Barn area of Dublin whereby Pearse, Plunkett and McDiarmada confronted him and after three days of much and, at times, heated debate, Connolly decided to throw his lot in with the IRB, the Volunteers and other groupings.

Many believe Connolly was arrested by the IRB but leading historians differ on this. In our play we show the capture of Connolly and their highly charged meeting in the Dolphin’s Barn area and his eventual persuasion by Pearse and Plunkett to enter the Rising.” 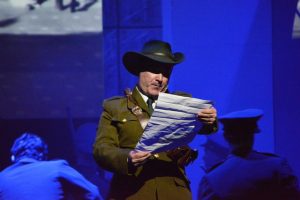 The connections between Scotland and the Easter Rising are something that both Gerry Cunningham and his company have been aware of in preparing to bring Blood Upon the Rose to Glasgow.

“The tickets sales are going unbelievably well with over 2000 already sold and having a capacity of just under 3000 we are hoping for a sell out,” he continued. “The responses have been breathtaking. We are really looking forward to bringing our show to Glasgow, a city which had a great influence on the Rising.

“Glasgow can be very proud of its sons and daughters who came to the aid of its comrades in Dublin in 1916. Of the 90 men who trained for the Rising at Joseph Plunkett’s Kimmage House, 18 were from Glasgow. Indeed it was a Glasgow man who raised the flag of the Irish republic on the roof of the GPO, roofer Paddy Moran.

“The proud tradition of Republicanism in Glasgow and Scotland manifested itself greatly in the Rising in Dublin in 1916. Margaret Skinnider was born in Coatbridge in 1982 to Irish parents and fought in the Royal College of Surgeons alongside Michael Mallin, was wounded and sentenced to death, received an amnesty and returned to
Scotland to continue the struggle.

“Charles Carrigan from Denny was killed on Easter Friday on a break-out from the GPO, and leading Glaswegian Seamus Reader supplied much needed ammunition to Sean McDiarmada. Given a history like this one we cannot be surprised at the amount of interest shown in Glasgow in the Easter Rising.

“Easter Monday 2018 is the 102nd anniversary of the Easter Rising and the River Tall Theatre Company could think of no better city to bring it to than Glasgow. The show hopefully enforces the love for our history and our Irish roots.”

Tickets for the hotly anticipated performance can be purchased here