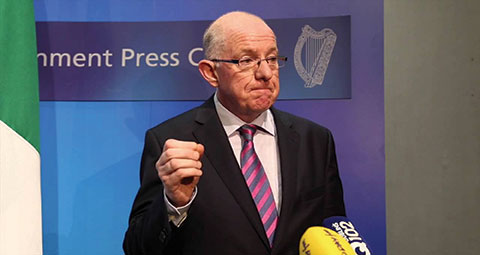 SENIOR politicians in Ireland and Irish consular staff in Edinburgh have vowed to make ‘every effort’ to maintain the current status of Irish people living in Britain, after British Prime Minister Theresa May failed to rule out a change in status being introduced during Brexit negotiations.

The news will go some way to calming the fears of Irish people living and working here during the uncertainty of Britain’s Brexit negotiations. Ireland’s ambassador to Great Britain, Dan Mulhall, also identified maintaining the status quo as a top priority for the Irish Government.

Prime Minister May made comments in response to Laurence Robertson, who chairs the Northern Ireland Affairs Committee, which suggested that the status of Irish people in Britain will draw on the pre-existing arrangements and won’t be subject to reciprocal arrangements being put in place UK citizens abroad, as with other EU nations after Brexit.

“The issue of the rights of citizens of the Republic of Ireland, as you say, is on a different and longstanding historical basis from other members of the European Union,” she said. “Obviously I’ve been clear that I want to—at an early stage—look at how we deal with these issues of people from other countries within the European Union who are living within the UK in order to offer reassurance.

“I’ve been clear in relation to citizens of the EU as a whole that we want to ensure that we also see UK citizens living elsewhere being treated on a reciprocal basis.”

However, she did not rule out the introduction of border checkpoints in Ireland and while she spoke of a hope that the that there would be ‘no return to the borders of the past’ she failed to discount passport check on the border—something that would mark a serious departure from the current practice and would signal a definite change in rights of Irish people to travel freely to Britain.

“We want to ensure that we have the right relationship on the border between Northern Ireland and the Republic of Ireland. That’s where the focus needs to be,” she said.

In response to these developments, Ireland’s Minister for Foreign Affairs, Charlie Flanagan TD, moved quickly to calm fears, and assured Irish citizens that there had been no indications made to Irish politicians by their British counterparts that a change in status was being pursued by Britain.

“Indications that I have received from discussions with members of the Brexit team are to the effect that there is a clear understanding of that relationship and every effort will be made to maintain the common travel arrangements,” Mr Flanagan (above) said. “[It is] absolutely essential… that the common travel area which has long since been established before either the UK or Ireland were members of the EU is firmly maintained and protected.

“It’s vitally important that in the negotiations and in the relationship between the UK and the EU that our unique circumstance in Ireland is acknowledged, appreciated and maintained. I have been at pains to stress that, as has the Taoiseach.”

On this side of the Irish Sea the efforts to maintain that relationship is the priority of the Ireland’s diplomatic mission in Edinburgh, and the Consul General of Ireland in Scotland, Mark Hanniffy, reinforced the importance of those efforts and spoke of the ongoing meetings between Ireland and their partners across the EU in which the issue will continue to be raised.

“It is important to note that there is a clear understanding between the British and Irish Governments that every effort will be made to maintain the Common Travel Area and the rights that come with that,” Mr Hanniffy told The Irish Voice. “There is no desire to limit the freedom of people on both sides of the Irish sea to live, work and travel freely across these islands.

“The need to maintain the Common Travel Area and to ensure the protection of the rights of Irish citizens in the UK is a key priority area for the Irish Government, and we continue to raise it as a priority issue in all of our meetings with EU counterparts.”

In a letter written to the Irish community of Great Britain—and published by the Irish in Britain group—Ambassador Mulhall highlighted the diplomatic relations between Ireland and Britain, which ‘have never been better,’ as a major asset for Ireland in protecting the interests of Irish citizens in Britain at this time.

“We will want to preserve the advantages to both countries of the Common Travel Area which allows Irish and British citizens to live and work in each other’s countries without restriction,” Mr Mulhall said. “This system has operated to our benefit since the formation of the Irish State. We need to ensure that nothing in the arrangements for the UK’s exit from the EU will compromise this mutually–beneficial, system of free movement.

“I want to stress the vital importance for Ireland of our relations with the UK which have never been better than they are today. As we prepare for the UK’s future exit from the EU, we want these positive ties to continue to serve us well in the future also. Irish people are represented in every walk of life here and have made a huge contribution to British society.

“We are committed to supporting the prosperity and wellbeing of our community as these complex future negotiations between the EU and the UK get underway in the coming year.”

Ireland and the EU

However, Mr Mulhall also reiterated Ireland’s commitment to the EU, and spoke of the political will in Ireland to continue to work through the European Union for the mutual interest of its members after Brexit.

“Ireland will continue to be an EU member with a commitment to preserving and building on the Union’s distinguished record of achievement,” he concluded. “We hope that the UK will be able to develop the kind of close, cooperative relationship with the EU that will serve all of our interests.

“We will miss the day–to–day cooperation with the UK around the negotiating table in Brussels where, for more than 40 years, our ministers and officials have met, worked together and developed friendships that have helped our bilateral relations to grow and prosper.”