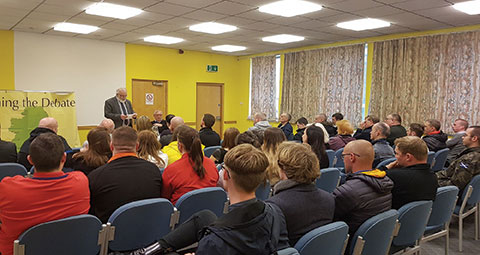 THE campaign for a United Ireland came to Scotland as Sinn Féin MP Francie Molloy addressed meetings in both Edinburgh and Glasgow as part of a series of public briefings.

The series of meetings—‘Opening the Debate on Irish Unity’— saw MPs from the party address assemblies in London, Manchester and Liverpool as well as the two biggest cities north of the border.

Looking ahead, Mr Molloy (above)—who serves as MP for Mid Ulster—spoke about the new opportunities provided by Brexit for those who are pursuing unification both in Ireland and abroad.

“The triggering of Brexit has changed everything in this debate,” Mr Molly said. “That’s why we are now hearing more people talking about a United Ireland—even people who previously wouldn’t countenance the idea. We welcome everyone to the discussion.

“It’s clear that the people in the North voted to remain in the EU—as did the people of Scotland—this democratic expression provides a unique opportunity to look again at building a shared future beyond partition, sectarianism and division.”

Speaking to The Irish Voice during his visit to Scotland, Mr Molloy was upbeat about the reception he had received, as well as the interest shown by those who attended the two meetings.

Despite a protest against the meeting, which saw police in attendance in order to keep control of those who had gathered in an attempt to prevent the discussion, the meeting went ahead as planned and saw many people sharing their perspectives and listening with interest as Mr Molloy spoke.

“There was opposition outside, but inside we got a good reception,” he told The Irish Voice. “It was a good sign of people’s willingness to get involved, and it is obvious that people are interested in participating—particularly with regards to diaspora involvement.

“We view Brexit as a stepping stone to unification. Partition remains the biggest evil in north-south relations, so we hope to be able to challenge that by seeking special status for the north and seeking Unionist support.

“Since Brexit, a united Ireland referendum has become a talking point. It was often ignored or put to the side, but it’s a real point of discussion now.

“Our job will continue even if Britain exits the EU, but we must do as much work as we can now.”

Mr Molloy was joined by other Sinn Féin MPs who led the debate at the meetings in England. Pat Doherty MP spoke in London, and issued a call for a referendum on the issue of Irish unity as soon as possible.

“As Irish Republicans, it isn’t a matter of if we will achieve a united Ireland—it’s a matter of how and when,” he said. “Obviously, Sinn Féin would like to see a unity referendum called as soon as possible. We can see Brexit is coming down the track and the implications this will have for us all.

“The recent watershed Assembly election has also shown us that our vision of a shared future for all is on the forward march. Now is the time to flesh out the merits of Irish unity.”