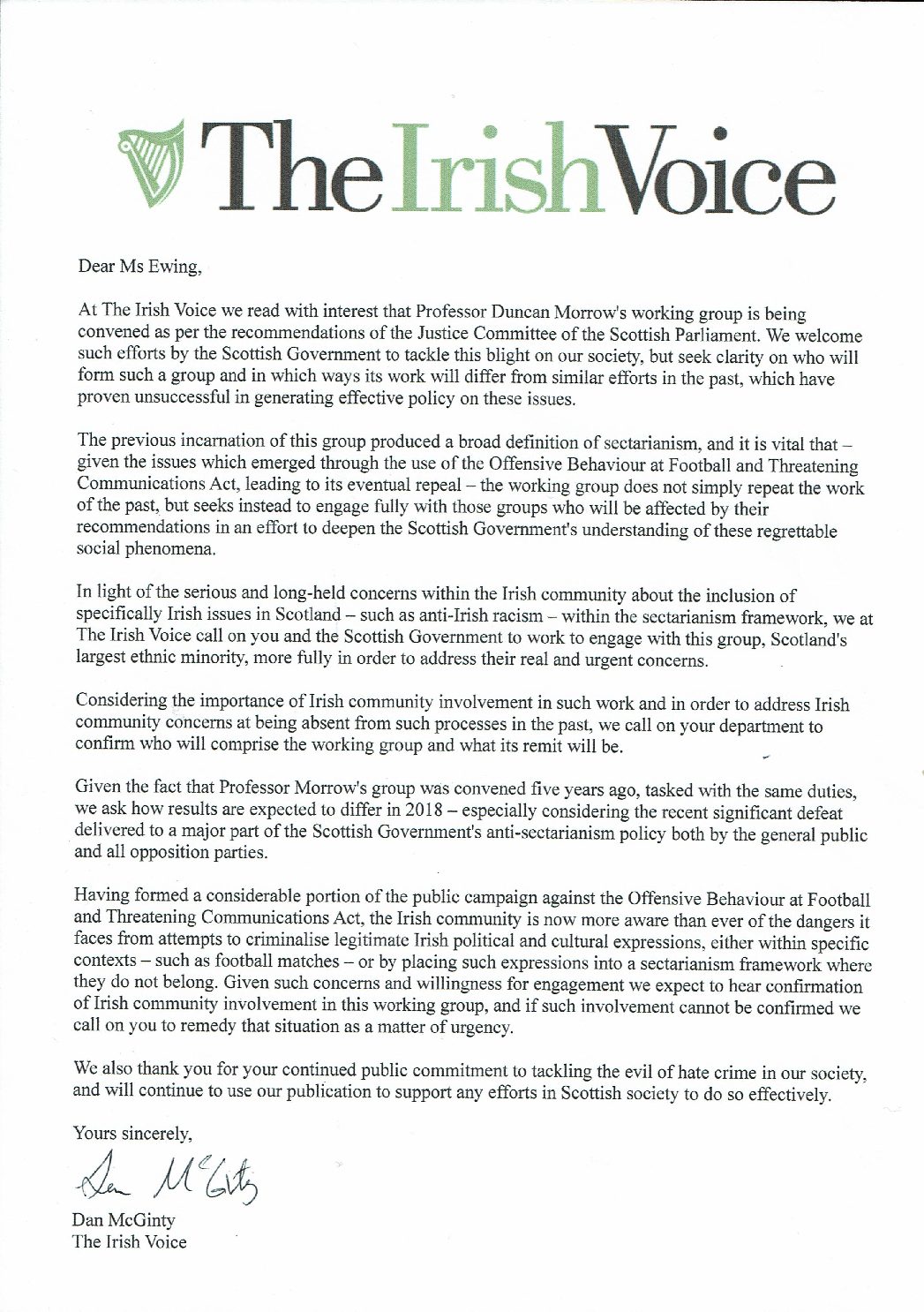 Following the repeal of the Offensive Behaviour at Football and Threatening Communications Act, a new working group has been convened by the Justice Committee to consider the legal definition of sectarianism.

The working group will be chaired by Professor Duncan Morrow, and it is hoped by Annabelle Ewing, Minister for Community Safety and Legal Affairs (right), that by establishing a legal definition of sectarianism it will be ‘easier for police and prosecutors to tackle the issue.’

However, there has been criticism from within the Irish community that lessons have not been learned from the OBFA and that despite the fact that the Irish community may be affected by the recommendations of the working group it will have no dedicated representative as part of the process.

In recognition of such concerns, The Irish Voice has written to the minister to seek clarity about the remit of the working group and those who will make it up, in order to ensure that our community’s voice is heard.

Announcing the convening of the group, Ms Ewing also confirmed new extra funding to tackle sectarianism—amounting to some £515,000.

“Sectarianism must be tackled with the same conviction as every other hate crime,” she explained.

“Since 2012 we have delivered an unprecedented range of activities to tackle the issue across Scotland, which have made a significant impact—and this latest funding builds on these achievements.

“We have shown sustained leadership and commitment to this agenda and look forward to working with others who can positively influence the communities they serve so that we can eradicate sectarianism once and for all.

“I thank Professor Morrow for taking forward the important work to consider the legal definition of sectarianism and I look forward to the working group’s recommendations.”

The efforts by the Scottish Government were also backed by Professor Morrow as he spoke of his role in creating a legal basis for the fight against hate crime.

“The continuing government support for community-based projects is evidence of genuine commitment to tackle sectarian issues where they matter-in real lives,” he said. “I look forward now to taking this opportunity to explore the options for improving the legal basis for protecting against sectarianism.”

However, Paddy Callaghan of Comhaltas Ceoltóirí Éireann underlined the importance of the involvement of the Irish community in any process.

“If a working group is to be created to look into sectarianism then as the group which has consistently been the biggest target of sectarian aggravation, according to Scottish Government statistics, then the Irish community must be involved in these discussions,” he told

“To fail to include figures from within the Irish community or indeed to engage with cultural groups to ascertain the nuances of Irish community ideology would indicate the working group lacks a full understanding of the single largest victim group from sectarian crimes.

“For too long legitimate expressions of Irish identity have been viewed as sectarian and without meaningful consultation with the Irish community they will be unable to fully express their cultural identity without fear of it being interpreted in the wrong way.”

“We read with interest that Professor Duncan Morrow’s working group is being convened as per the recommendations of the Justice Committee of the Scottish Parliament” we wrote. “We welcome such efforts by the Scottish Government to tackle this blight on our society, but seek clarity on who will form such a group and in which ways its work will differ from similar efforts in the past, which have proven unsuccessful in generating effective policy on these issues.

“The previous incarnation of this group produced a broad definition of sectarianism, and it is vital that—given the issues which emerged through the use of the Offensive Behaviour at Football and Threatening Communications Act, leading to its eventual repeal—the working group does not simply repeat the work of the past, but seeks instead to engage fully with those groups who will be affected by their recommendations in an effort to deepen the Scottish Government’s understanding of these regrettable social phenomena.

“In light of the serious and long-held concerns within the Irish community about the inclusion of specifically Irish issues in Scotland—such as anti-Irish racism—within the sectarianism framework, we at The Irish Voice call on you and the Scottish Government to work to engage with this group, Scotland’s largest ethnic minority, more fully in order to address their real and urgent concerns.

“Considering the importance of Irish community involvement in such work and in order to address Irish community concerns at being absent from such processes in the past, we call on your department to confirm who will comprise the working group and what its remit will be.

“Given the fact that Professor Morrow’s group was convened five years ago, tasked with the same duties, we ask how results are expected to differ in 2018—especially considering the recent significant defeat delivered to a major part of the Scottish Government’s anti-sectarianism policy both by the general public and all opposition parties.

“Having formed a considerable portion of the public campaign against the Offensive Behaviour at Football and Threatening Communications Act, the Irish community is now more aware than ever of the dangers it faces from attempts to criminalise legitimate Irish political and cultural expressions, either within specific contexts—such as football matches—or by placing such expressions into a sectarianism framework where they do not belong. Given such concerns and willingness for engagement we expect to hear confirmation of Irish community involvement in this working group, and if such involvement cannot be confirmed we call on you to remedy that situation as a matter of urgency.

“We also thank you for your continued public commitment to tackling the evil of hate crime in our society, and will continue to use our publication to support any efforts in Scottish society to do so effectively.”