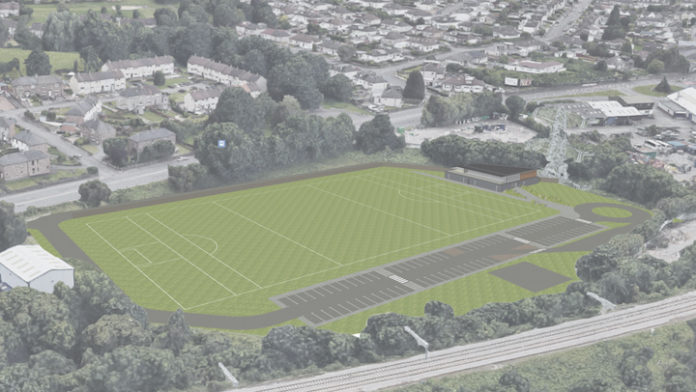 THE year 2022 is shaping up to be an exciting one for everyone involved with Scotland GAA, with the organisation set to celebrate its 125th anniversary and also the Pearse Park Centre for Culture and Sport entering into an important phase of its development.

THE Pearse Park Development Committee—which includes members from the GAA, the Camanachd Association and AFL Scotland—held a virtual stakeholders’ meeting on May 24 to present and discuss their development plans to the GAA community, potential financial backers and the likes of Causeway Ireland Scotland Business Exchange, The Irish Voice, Sport Scotland, Active Schools and many other interested parties.

Scotland GAA Chair, Peter Mossey, opened proceedings by giving an insight into both the history of the GAA in the country and also that of Pearse Park itself. Peter explained how the purchase of the ground in 1953 helped to revive Gaelic games in Scotland, the centenary of the GAA in 1984 gave fresh impetus to renew and reinvigorate and the arrival of the likes of Donegal, Mayo, Derry and Dublin to the ground to take part in challenge matches in the 1990s stimulated fresh interest among the diaspora. However, funding challenges, coupled with health and safety issues, forced the closure of the ground in 2006.

Despite this, there remained a real desire to one day develop the only land owned by the GAA in Scotland and those involved with the organisation worked in tandem with their colleagues from Ulster GAA to move forward with plans to have not only Pearse Park redeveloped but also to have another centre available for Gaelic games in the west of the city, which eventually became the Clydebank Community Sports Club, home to Glasgow Gaels. Indeed Jenn Treacy, Secretary of Scotland GAA—who was co-hosting the meeting—explained that this ‘acted as a catalyst’ for the advancement of Pearse Park development plans.

After finally eradicating a Japanese Knotweed problem in 2019, plans began to gather pace, Jenn explained, with partnerships formed with the likes of the Camanachd Association, the Australian Football League and various businesses, feasibility and planning studies undertaken and funding sources being sought out—it is hoped that the funding will be in place by next year.

Emer Brennan of Glasgow Gaels, then showed those in attendance the proposed logo for the Pearse Park Centre for Culture and Sport and the website that is currently under construction. The stakeholders were then shown the ambitious plans for the site, which include not only the redevelopment of the pitch, but also some of the excellent facilities planned, including changing rooms, a kitchen and bar, a meeting room, a spectacular viewing terrace and a venue that it is hoped will act as the Cultural Centre. With regards to the latter, Peter said that: “Glasgow without an Irish cultural centre is almost unthinkable, so this gives us a unique opportunity to provide that.” It is hoped that it can act as a venue for Irish language, music and dance organisations among others.

Peter and Jenn thanked those in attendance, who reciprocated by offering their gratitude for the concerted efforts in furthering the development plans, before Peter spoke of everyone’s excitement at the ‘chance to turn Pearse Park into something really special, which we’d all love to see realised.’

The meeting concluded with Scotland GAA announcing their upcoming jersey launch on June 7, a match between Scotland and London GAA at the Clydebank Community Sports Hub on June 27—which will be available via a livestream—and the planned celebrations for the 125th anniversary on January 15, 2022, at the Village Hotel in Glasgow.

All this, along with the advancement of development plans for the Pearse Park Centre for Culture and Sport, means that Scotland’s GAA community and the wider diaspora have much to look forward to in the weeks and months to come.