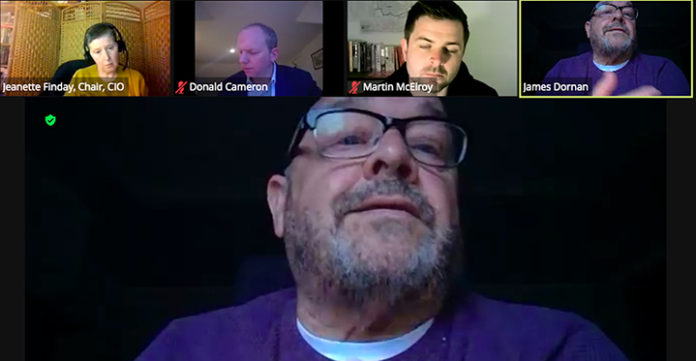 CALL It Out: The Campaign Against Anti-Catholic Bigotry and Anti-Irish Racism spearheaded a bold new initiative to help represent the concerns of the Irish community in Scotland by hosting an election hustings with candidates from leading political parties directly addressing attendees.

It was the first such hustings held in Scotland, and places some of the commitments made to the multigenerational Irish community in Scotland firmly on the record as the country awaits the outcome of the 2021 election. Given the difficulties in seeking authentic engagement from politicians and political institutions in Scotland, the hosting of the event itself is a major step forward in breaking down the barriers between the Irish community in Scotland and those who wield political power.

Input and issues
Speaking ahead of the online event, Call It Out sought the input of voters, saying: “There is a widespread feeling among the multi-generational Irish community in Scotland that our community is not recognised in the way that other ethnic minority communities are; the issues of concern to us are ignored and the racism against us is covered up using the term sectarianism.

“Here is an opportunity for you to question the candidates on their views on these issues and to hear what they have to offer us as a community in the coming parliamentary session.”

Attending on behalf of their parties were James Dornan of the SNP, Donald Cameron of the Scottish Conservatives, Carolyn Scrimgeour of the Scottish Green Party and Martin McElroy of Scottish Labour, while ordinary community members joined those from Call It Out to put their concerns to those seeking election to the next parliament at Holyrood.

Among the issues being brought to the attention of candidates were the frequency and location of Orange Order parades and the hateful behaviour often associated with them, and the future of Catholic education, along with questions aimed at the ongoing difficulties with Irish community engagement by politicians and the repeated misidentification of anti-Irish racism as ‘sectarianism.’

Also drawing attention was the heightened impact on the Irish community in Scotland by the Covid-19 pandemic, with Call It Out sharing the reaction of candidates to the disproportionate effect it has had.

“All of the panel are expressing shock and concern about how the Irish community in Scotland have been affected by Covid,” they said. “Our group has highlighted the serious inequalities in the statistics.”

Parades and positivity
On the issue of Orange parades, Ms Scrimgeour of the Scottish Green Party spoke of her party’s efforts in reacting to the assault of Canon Tom White as he spoke with Massgoers while a parade was passing the door of his church.

“Green councillors in Glasgow have been working to help prevent parades passing St Alphonsus Church after the attack on Canon Tom White,” she said.

Mr Dornan also spoke about the issues, responding to attendees of hustings by saying: “I’ve been fighting on this front for many years. I want to achieve a Scotland where religion or ethnicity is your business and not a reason for someone else’s hatred.

“The [Orange Order] point blank refused to cut down on the number of walks and the routes through contentious areas.”

On a more positive note, candidates also spoke strongly in favour of supporting Irish culture in Scotland, with Martin McElroy calling for the ‘establishment of a cultural heritage centre telling the story of minority groups in Scotland,’ a call also echoed by Donald Cameron.

“There’s a lot we could be doing to promote Irish/Catholic culture and heritage,” Mr Cameron said. “There are so many cultural opportunities here we should grasp going forward.”

Understanding and engagement
Crucial to the discussion was the issue of anti-Irish racism, and the determination of authorities to classify it as sectarianism, and candidates spoke of their fresh understanding of the issues having spoken to members of the community affected.

“My own ignorance on the issue has been highlighted tonight—I didn’t realise the language on the issue was so important,” Mr McElroy said. “I’ll make sure I take this on board going forward.”

Mr Dornan meanwhile spoke of the difficulties in generating action on the issue, but nevertheless pledged to improve the language used in the future.

“The use of ‘sectarianism’ is a lazy use of language and I accept that, but it’s one way you can get all groups around the table to discuss the issue,” he said. “I’ve spoken to the Justice Secretary about this for a number of years and he says we should be calling it out for what it is—anti-Catholic bigotry, anti-Irish racism—so I’m on board with identifying language.”

With the election looming just a few days after the hustings, the candidates concluded by thanking participants for sharing their experiences and committing to establishing a new landscape for the Irish community in Scotland.

“We should make sure we’re reaching the right groups across the country,” Mr Cameron said. “One message I’m getting from this hustings is that the Irish community aren’t being heard and I will take that away.”

Having had an important role to play in issues affecting the Irish community in the past, particularly with his firm defence of the hated Offensive Behaviour at Football and Threatening Communications Act, the conclusions of Mr Dornan were important ones given the strong likelihood of the SNP forming the next government.

“A huge thank you to Call It Out for holding tonight’s hustings,” he said. “There is much to take away and digest from it and a lot I know now I never knew earlier tonight. Elected or not on Thursday you and the Irish community have my support.”

Regardless of the outcome of the election, the engagement by Call It Out will provide an invaluable foundation for future engagement with politicians.