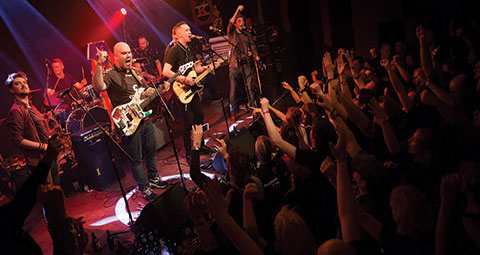 GLASGOW’s premiere folk and rollers, The Wakes (above), recently celebrated their tenth anniversary with gigs in Glasgow, Dublin and Hamburg.
The group, founded in 2007, played to a sold-out crowd at Glasgow’s St Luke’s venue to mark the occasion, before travelling across the Irish Sea to wow crowds at Murray’s Bar in Dublin and then completing their anniversary shows in their second home in Hamburg at the Knust venue.

The Wakes, which comprises: Conor Markey on mandolin and banjo, Danny McGuinness on whistle, Paul Sheridan on guitars and vocals, Chris Cruickshank on bass, flute and saxophone, Christopher James on harmonica and Eamonn Maguire on drums, have developed a strong following within the Irish community in Scotland over the past decade. The have released four studio albums in that time–These Hands, No Irish Need Apply, The Red and the Green and Venceremos—and a number of well-received EPs. As well as dealing with a number of historical and social issues in their music, the band also celebrates Celtic FC supporters’ friendship with the fans of FC St Pauli in Hamburg.

“We were invited to play the Celtic/St Pauli Party in Hamburg in February 2008,” Chris Sheridan said, explaining the band’s link with their adopted football team and city. “We wrote Pirates of the League​ for that gig and it started to grow from there, getting a bit stronger over the years. One of the things that made it stronger was meeting Benny Ulmer—in March 2008—a photographer from Stuttgart who became our manager. He’d organise—and still organises—a lot of tours for us in Germany on the Left wing/anti-fascist scene and this helped build upon the foundations we had with the club.”
It was only fitting then, that the group included Hamburg in its itinerary for the Tenniversary shows, which, as Paul Sheridan explains was a special concert and one of the highlights of his time in the group.

“The anniversary shows were great,” Paul said. “Both the Glasgow and Hamburg ones were excellent. There was a great atmosphere and the crowds were brilliant. We will remember these nights forever.

“There’s been a lot of highlights throughout the 10 years of the band though, some big, some just on a personal basis. The first Big Hooley, the St Pauli 100 year concert in the stadium in front of 23,000 people, getting to share the stage with the boys down through the years, being able to contribute to different charities through our music and make a difference in people’s lives—the single No Human is Illegal raised €10,000 for refugee charities in Hamburg and the lifeboat rescue charity Seawatch in 2017.

“Album launches have always been highlights too, maybe because they are a culmination of months of hard work. Some of the festivals and support slots down the way, getting to travel to play and hearing people singing your lyrics is all special. We were on the same bill as Sharon Shannon this year at a festival and she was one of the reasons that Danny picked up the accordion. I really liked that as I think it was a really nice moment for him.”
Despite celebrating the milestone, the band has no plans to rest on its laurels and a new album is expected by 2019.
“We want to continue performing and touring. There are a lot of new things coming up on the horizon. This has been a great year though with it culminating in the Hamburg Tenniversary show. We really couldn’t do it without our families’ love and support, and I’d especially like to thank my wife Hannah who has always been very patient and supportive.”