NEIL Lennon was the last Hibernian manager to win his opening three league matches as manager. In fact, the Irishman’s Hibs side won their first five league matches of season 2016/17. One has to go far back in history to the mid-1970s to find another Hibs team that has won even three league matches on the bounce at the start of a campaign—that team was managed by the great Eddie Turnbull. Jack Ross equalled Turnbull’s record and very nearly equalled Lennon’s, too.

The Easter Road men go into the international break sitting second in Scotland’s Premiership, having played six matches, losing one, drawing one and winning an impressive four thus far. Hibs are three points behind early leaders Rangers and three points above champions Celtic who currently sit in third—though the Hoops have two games in hand.

The green jerseys opened the campaign on August 1 amid the surreal atmosphere of an empty Easter Road, beating Kilmarnock 2-1, with both goals coming from Martin Boyle. The Socceroo has just extended his contract at Easter Road and has become very much a key player for the Cabbage. Compare and contrast the player’s current importance to the squad to four or five years ago, when Martin was a squad player fighting for a starting place against better quality players. Now he’s become a quality player himself, and the improvement in the player’s form and confidence says a lot, both about what’s he’s learned from successive Hibs managers and coaches and about the player’s own character. Boyle wants to be a winner and Hibernian are lucky to have him.

After the Kilmarnock win, Hibs played their local top-flight rivals, Livingston, in the Lothian derby at the ‘Spaghettihad’ Arena. Jack Ross’s men were the ones doing the roaring, humbling the Lions 4-1. New boy Kevin Nisbet bagged an impressive hat-trick while the other goal was scored by Welsh hitman Christian Doidge. In that performance, Hibernian displayed superiority in ability, fitness and desire. Doidge by now must surely be in with a chance of being called upon to play for Wales.

A few days after annihilating Livingston, the Hibees were on Tayside, recording a solid 1-0 victory over Dundee United (above). The only goal was scored by Doidge with the type of finish that harked back to the wonder-goals of yesteryear scored by the likes of David Zitelli in the green.

A drab 0-0 draw with Motherwell at Easter Road maintained Hibs’ good start but deprived Jack Ross of a place in the record books. Though, this wasn’t exactly the first time that Hibs and that Lanarkshire side have served up a draw. An injury-time penalty by Stevie Mallan gave the Hibees a 1-0 win over St Johnstone up at McDiarmid Park, then most recently, Aberdeen came to Easter Road and narrowly won 1-0 largely thanks to their trademark brand of anti-football. Ross McCrorie in Aberdeen’s defence stopped everything the green jerseys threw at the Dons and it seems that Hibs have once again missed out on a good player who has ended up at Pittodrie.

That slight disappointment aside, it’s been a good start to the new campaign for Edinburgh’s green and white. Utility man Alex Gogic has proved quite a find and has been rewarded with an international call-up, to represent Cyprus. Goalie Ofir Marciano has been in fine form, while new left-sided youngster Josh Doig has also impressed many, and could very well be a long-term replacement for veteran Lewis Stevenson. The Hibees haven’t conceded a goal from open play, yet, either. Jack Ross has won exactly half of the matches in which he has led Hibernian as manager, and fans will be hoping that level of consistency is maintained. Even at this early stage in the campaign, the Cabbage ‘n’ Ribs are a far better side than the shambles of Paul Heckingbottom last year. The green jerseys’ next three fixtures feature away trips to St Mirren and Celtic either side of a home match against league leaders Rangers. Fans will better know the calibre of their new-look Hibs side after these stern tests.

In other news, Irishman Daryl Horgan has left Hibernian to join Wycombe Wanderers in the English Championship. One of the Hibees’ better players, Daryl will be best remembered by Hibs fans for his double at Tynecastle in the win over Hearts back in April 2019.

Former Hibernian chairman Tom O’Malley passed away last week and everyone at The Irish Voice would like to offer our condolences to Tom’s family and friends, and to the wider Hibernian family. Tom was on the Hibs board in the 1990s and was made vice-chairman under Lex Gold in 1997 before taking over as chairman of the club in 1998. 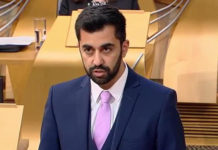 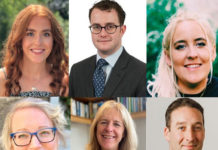 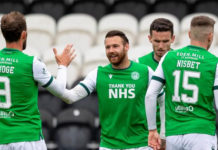