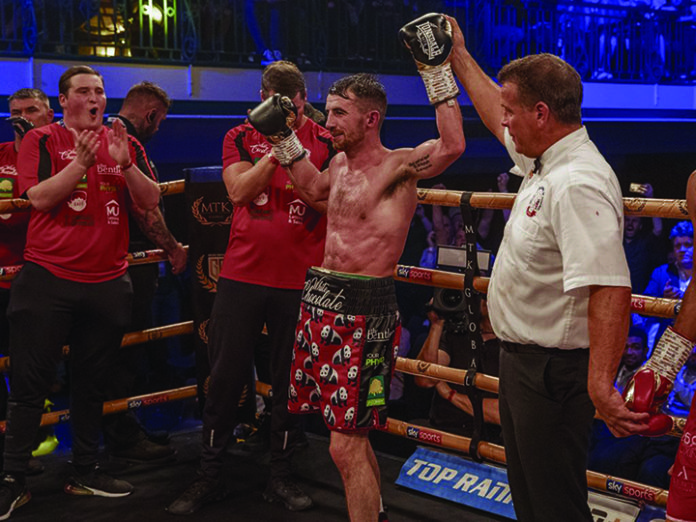 BOXING in Ireland has been going through a difficult spell. Despite the likes of Katie Taylor, Michael Conlan and Jono Carroll being involved in big shows in the US, UK and Ireland in the past year, there is a real lack of opportunity for many Irish boxers at this time.

Apart from MTK putting on several shows in Belfast last year, with more to come this year, the promotion are still boycotting putting any events on in the Republic due to negative newspaper headlines. Matchroom, who have both Taylor and Carroll as part of their ranks still don’t appear to be interested in putting a big event, a homecoming for Katie Taylor, on any time soon.

What’s left are a couple of minor events dotted around the country leading several to fight in Scotland, England and abroad.

Good news for diaspora
It’s good news for fans of Irish boxing here in Scotland. Last year we had the then undefeated 25 year-old Dubliner Keane McMahon travel to Aberdeen to take on the highly rated local Dean Sutherland for the vacant Boxing Union Ireland Celtic title, as McMahon suffered his first and only defeat.

Another Dubliner Jay Byrne has fought several times in Glasgow in the last couple of years, picking up a Celtic title and he has since signed with Glaswegian based boxing promoter and manager Sam Kynoch.

The MTK stable of boxers includes a host of Irish boxers from top fighters like Carl Frampton and Tyson Fury to many less familiar names. MTK put on several shows at the Emirates Arena in Glasgow last year, featuring Belfast’s Tyrone McKenna, Limerick’s Paddy Donovan and Dubliner Pierce O’Leary. MTK Scotland have opened a gym in Holytown where several Irish stars based themselves for training camps, and until recently European champ Tyrone McCullagh, WBC International champion McKenna and former Irish Olympic captain Paddy Barnes all trained there. Barnes has since retired and the two Tyrones have recently changed trainers, but Belfastman Seán McComb is still based there.

A home from home?
European champ, McCullagh from Derry (above) told The Irish Voice why he feels Irish boxers are coming over.

“I’ve always liked Scotland, Glasgow is an amazing city and they love the Irish so it was an easy choice to come to Scotland.” McCullagh said. “Unfortunately I never had the pleasure to actually have a fight in Scotland but I’m sure if I did it would have been a great experience and they would have got behind me 100 per cent. Hopefully one day I’ll get to fight in Scotland.

“As I said before the Scots and Irish get along really well. There’s more Irish bars in Glasgow than anywhere else I’ve been, so it’s like a home away from home really. I’m sure that has a bit to do with it. You are only a half hour’s flight from Ireland as well and I know MTK have been doing great work in Scotland and running great shows so this is obviously helping as well.”

Another top boxer who has found himself on these shores in recent times is the former Celtic champion Eric Donovan, who put on a great display in November in Glasgow with several Irish fans having followed him over from Kildare.

“I had a planned fight that fell through for October 25 back in Ireland last year, so when it fell through I asked my manager to get me onto a card and Glasgow, Scotland was the one we chose,” Donovan explained as to why he came about to be fighting in Glasgow. “I’m happy we did now because I made contacts and I will more than likely be back over there again this year and it’s something I’m really looking forward to. Scotland is a very strong and proud boxing nation so I’m not surprised that many Irish boxers are training there, simply because they will get good sparring and development. Also the Irish guys who are signing up to Scottish promoters obviously see an opportunity to get good fights, stay busy and further develop their careers. Boxing in Scotland and the UK is now in a very healthy place.”

More to come
Having had both Donovan and McMahon appear on a couple of his shows last year, promoter Sam Kynoch has also signed Jay Byrne and Wayne Kenny with both having appeared on events in recent past in Scotland.

“Signing Irish boxers is something which I didn’t set out to do—given that all of my events are in Scotland,” Kynoch explained. “However, I worked with Jay on a few fights and because of the lack of events in Ireland it made sense for me to sign him as I could secure fights for him in Scotland—and elsewhere (his two most recent fights have been in Manchester).

“Jay is very easy to work with and we get along well so it makes sense. Wayne Kenny was introduced to me via Jay. Again due to the limited number of events in Ireland and because he had been let down on making his debut several times it made sense for him to sign with me. He will be in action a couple of times before summer and hopes to contest the BUI Celtic Title before the end of 2020.”

It seems likely that Byrne and Kenny won’t be the last to sign with Kynoch Boxing.

“I have been approached by other Irish boxers, but I have to assess how much I can do for them,” Kynoch said. “With some I have advised that they sign with managers who are active in Ireland. I work closely with a number of Irish managers and Scotland vs Ireland clashes are always entertaining, so I am sure we will be seeing lots of Irish boxers in action on Kynoch Boxing events—whether or not they are managed by me.”

For fans of Irish boxing, it may be a good time to check out some shows in Scotland as there is likely to be an Irishman on the card.