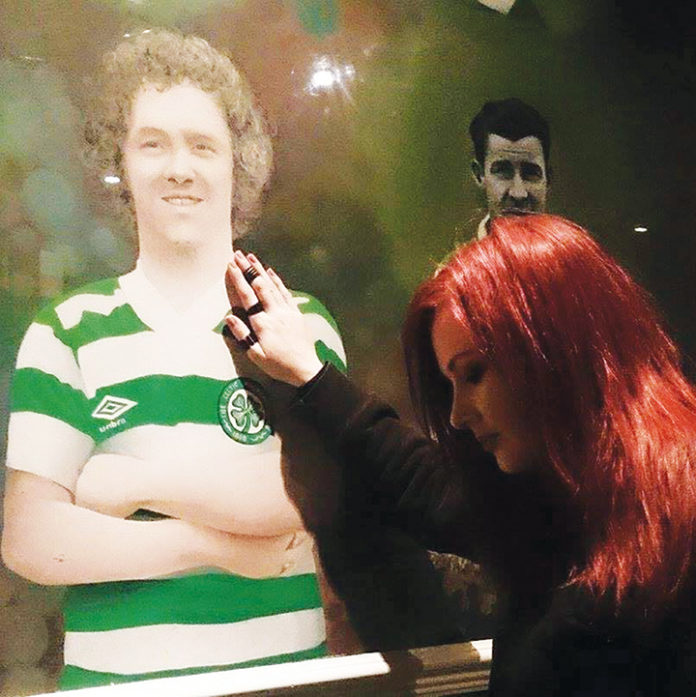 THE daughter of the late Celtic player Johnny Doyle has reacted to the release of RTÉ archive footage which has allowed her to hear her father’s voice for the first time since his death.

Having previously issued a call for supporters or broadcasters who had footage of her father speaking to contact her, she was disappointed when the search had proved pointless, but her dreams were realised when the Irish broadcaster released a short broadcast filmed in and around Celtic Park.

The footage was shot in 1980, the year before Doyle died in an accident at his Kilmarnock home, and featured the player speaking for a few moments as the squad gave an insight into life at Celtic to the cameras.

His daughter Joanna (above) was just three when he died, and given how widely she cast the net to find footage of her father speaking she was inundated with calls and messages from those who wanted to end her nearly 40 -year wait to hear his voice.

“The first I knew of it was when Paul McQuade of Celtic Graves and The Shamrock phoned me, but signal was terrible and the phone got cut off,” she told The Irish Voice. “That’s when I looked at my phone and noticed that I had about 40 notifications or so from people who had tagged me in something, but at this point I still didn’t know what it was because of the signal.

“I managed to see a message from Paul asking me to phone him ASAP, so at this point I’m panicking. I managed to phone Paul and he told me about the clip. I couldn’t believe it. I just welled up and started shaking with nerves and excitement.

“I had to hunt about for a signal to open the clip. I stood outside and fast forwarded it to the eight-minute mark and saw him. I screen recorded it so I had it saved. After that I couldn’t stop watching it. I can’t describe how I felt. Finally there he was in front of me speaking and I could finally put a voice to the person. It was amazing.

“We had been looking for audio since back in 2011, and then good old RTÉ come through with something! I just can’t believe it. It’s the most amazing thing.”

The footage also contained shots of old Glasgow and never-before-seen crowd shots and brief interviews, providing a trip down memory lane for supporters from the time, but none were more satisfied with the recently unearthed clip than Joanna.