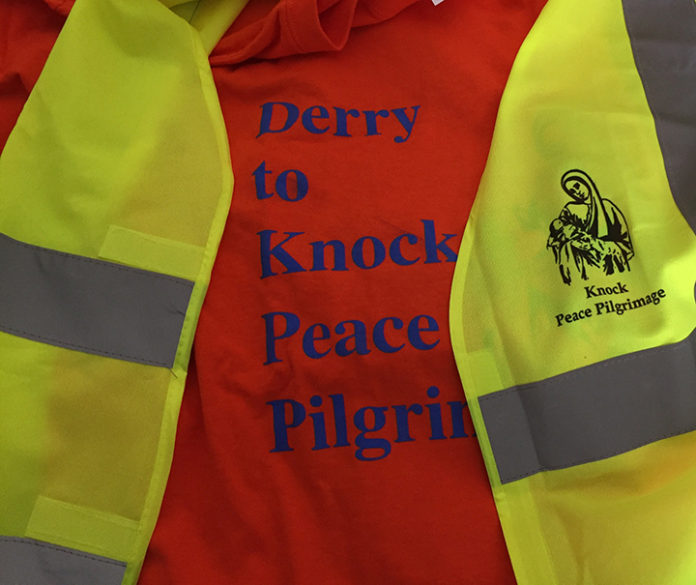 THE Cursillo—Cursillo being a lay Christian organisation—‘Knock Walk’ began in Derry in the 1980s and spread to Belfast in the 1990s. The walk’s collective intention is to pray for peace; in individual hearts, families, communities and countries. Its beginnings are wrapped up in the violence of the so-called ‘Troubles’ conflict within and between Ireland and Britain.

Participants in the Knock Walk usually begin their journeys the Wednesday after the July 12 ‘celebrations’ in the north of Ireland. But the Knock Walk is the real walk, the real deal, for these pilgrims. Every year more than 100 walkers depart from Cork, Dublin, Derry and Belfast—the latter involves a short initial drive to leave from Armagh—on pilgrimage to ultimately meet for the celebration of Holy Mass at the Marian Centre of Knock in County Mayo in the west of Ireland. Prayer and Mass play a central role for participants throughout the days of pilgrimage.

Once, twice, three times a walker
This year—my third time doing the walk—I was picked up by a friend at Belfast’s City Airport at 8.15am and met up with some of the Belfast contingent at the famous Clonard Monastery for the mini-bus drive to the Armagh village of Middletown. After a quick warm-up we started our walk at 10am, departing for the Monaghan town of Clones, thus constituting the first day of the long 136-mile journey: hoping to arrive safely in Knock just four days later. For the ‘pleasure’ each participant pays £90 to help pay for food, medical supplies, hire of transport, and so on. Over a number of decades walk participants have struck up long lasting relationships not only with each other, but also with a number of communities along the way. Thus, it’s traditional that these communities show deep and meaningful hospitality by opening their parish halls, gyms and GAA grounds to allow for a shower or a stay overnight: some local families even offer a bed for the evening for a few of the weary travellers.

The first day’s effort comprises a journey of 20 miles to Monaghan town, with some rest there before heading for Clones. The initial night will see most participants bedded in sleeping bags, blow up and camp beds in the same hall Barry McGuigan used to train in before he became a World Champion boxer in the 1980s. Pilgrims enjoyed a feed in a local hotel prior to Mass being celebrated at the nearby Sacred Heart Church by chaplain for the week, Fr Ciaran Dallet. Even at this early stage the pains and strains began to show and some participants creaked a little as they walked up the hill to the Church.

At Knock Walk Masses, walkers and locals are drawn together. As is the practice for the Belfast walkers, hymns How Great Thou Art and Lady of Knock complete proceedings at the end of each Mass.

Later around 35 bodies—by now almost semi-detached from their sore feet and legs—are bedded down in the hall and side rooms and cupboards for the initial evening together. That first night I discovered I didn’t know that there were so many versions of the human snore… and more!

Onwards to Cavan
The following morning at 6am walkers and back-up team began stirring. By 8am, with breakfast over, sore feet and bodies having received a degree of remedial attention from the support squad, with prayers said, some music and chants on the part of the spiritual team, and the Blessed Sacrament unveiled and honoured, we set off for the biggest day in terms of length of walk—Clones to the Cavan towns of Belturbet (13 miles) and a stopover break at Ballyconnell (seven miles). Finally, 12 more miles to Ballinamore in Leitrim —a total of 32 miles between 8am and 5.30pm. For many walkers by this point the blisters really began coming to the fore along with old sports injuries and lack of proper training. One really does require to do appropriate training to be walking on average 27 miles per day over five days. Busy lives however means that few get the chance to prepare properly.

Along the way, as with every day, members of the back-up team are strategically placed and clap, cheer, hug, encourage, and have ready cups of water, pieces of fruit and the odd bit of chocolate, all with the intention of refuelling the walkers, physically and psychologically. On Thursday evening as usual the support squad arrive at the hall ahead of the walkers. Their tasks are to unload the luggage van, prepare to offer minor medical remedies to numerous ailing bodies and, cook dinner. The walkers subsequently arrive, they set up their bedding spaces: some receive a massage and attention to their feet. They then settle down to consume a welcome dinner. Mass is subsequently celebrated at the beautiful St Brigid’s, Cannaboe.

Leitrim, Sligo and on we go
On Friday its Ballinamore to Carrick-on-Shannon (17 miles), finally stopping for the evening in Boyle in Leitrim—a further 10 miles away. At Boyle St Joseph’s Church is where Mass is celebrated on the Friday evening: full participation by walkers, two priests speaking meaningfully and genuinely, and a number of local parishioners join in too.

With almost 100 miles behind us—and throbbing feet as evidence—we start off for Ballaghadreen via Gorteen, to get another 15 miles under our belts. Before we get there however, one of the top moments for pilgrims is the hour stop at St Joseph’s Church at the small townland of Clonloo on the Sligo/Roscommon border. Here walkers are welcomed yearly by a handful of local delightfully hospitable parishioners who lay on a great spread of food, tea, soft drinks and smiles. Then the pilgrims take over with some communal hymn singing which helps create a perfect atmosphere and synergy for the next leg of the journey.

Gorteen, with its St Patrick’s Church where numerous walking pilgrims pop in for a prayer—some surely in thanksgiving that they have survived so far—also represents one of the biggest stop-overs of the walk. Here, pilgrims get a couple of hours to eat, refresh their bodies with a massage, their feet with some soothing lotions, acquire renewed blister applications and listen to testimonials from a handful of other walkers. The scene is set with singing from youthful pilgrim Kaitlyn and dancing from compatriot Paul on the journey. Paul attends the Walk every year. He also has Downs Syndrome and is a big hit with the walkers. He brings everyone much friendship and joy for its duration. This refreshing couple of hours sets everyone up for one of the final stages on the long march: Ballaghadreen in Roscommon beckoned.

Making it to Mayo
After reaching Saturday’s destination on the penultimate day around 6pm, refreshments and preparing beds for the night ahead take up some time. By this point the group is in a more relaxed mood, partly contributed to no doubt by an eager anticipation of the climax of their efforts and deep satisfaction that the task is almost accomplished. By 8pm we all cross the road to the Cathedral of the Annunciation of the Blessed Virgin Mary and St Nathy for our last evening Mass together this year. Then, dinner and a few refreshments for a good number at the local hotel.

The last morning is constituted by a 6am rise, the usual busy communal breakfast, followed by attention to blisters, sprains, strains and any precautions that need to be addressed to try to sustain walkers on their last vital steps, the final—it certainly feels ‘final’ for many of us—19 miles of the journey to Knock’s Marian Pilgrimage Centre. A couple of walkers are injured and can’t continue —they get driven to the venue. Some others have to rest a little longer as an aid to completing the last part and they take up their personal trial again after being driven a handful of miles further down the road. The group’s collective journey thus recommences around 8.15am with the intention of getting to Knock by about 1.30pm. There we will meet the pilgrims from the other three centres in Ireland and come together to celebrate Holy Mass in the old Church where on the external gable end wall in 1879 a vision of Our Lady was manifest alongside St Joseph, St John the Evangelist and the Lamb of God. The message of course was unspoken, reflecting much of the island of Ireland and most of its great mass of people that had been utterly silenced for centuries by human inflicted cruelties; widespread suffering and despair, much too early mortality, oppression in numerous forms, deep poverty, and of course the catastrophic Great Hunger of 1845-50. The week’s final Mass at Knock is, as ever, refreshing, wholesome and inspirational.

A rewarding experience
Many people might wonder who on earth and why would people choose to do such things in this day and age? It’s anything but easy, but it is fulfilling and rewarding. Such journeys also tell us that we need each other, people to plan and organise for us, people to chat to on the road, to wash our feet, to mend our wounds, to celebrate Mass with, to offer us a bed. The Knock Walk offers an opportunity to provide a shoulder to rest on, an ear to listen, to enable our mouths to say the right thing when needed. Despite the personal pain, there are no individuals on the Knock Walk: it’s a sharing experience. Participants realise they are a single body and the walk is in some ways a metaphor for life.

In the West, we don’t walk anywhere near as often as our predecessors, even of only a couple of generations ago. Dominant lifestyles reflect this. The amount of TV and of course social media consumed, a general lack of exercise and overeating, the accumulation of materialistic belongings and most destructively, an excess of self-centred aspirations, are part causes of social, cultural, community and personal dislocations and fractures. The current political world of the West also reflects these realties. The Knock Walk is thus counter-cultural.

Events like the Knock Walk have the capacity to assist on a journey of learning to be less self-centred and see the needs of others beyond selfish and often socially and spiritually damaging desires and appetites. Through the weaknesses that are revealed and experienced on the Walk, pilgrims ultimately become stronger in body and spirit: and many hope this can be taken into their wider lives.

Numerous pilgrims either already have done or go on to do other things within and for their communities, especially around their Catholic parishes. It feels good to be amongst such people. Volunteers working with alcoholics, with those who have mental health issues, drug addicts, the lonely, the homeless, working with youngsters doing sport, etc. Most simply are good neighbours as part of what they do and are about.

During the worst periods of the recent ‘Troubles’ conflict some Knock pilgrims lost loved ones and neighbours to actions on the part of the RUC, British Army and SAS. A few were involved in the conflict as Republicans and were incarcerated in the H-Blocks. Living in the north of Ireland has meant that as Catholics, many pilgrims have also in the past—and to a lesser extent can still have such experiences—suffered much; social, cultural, religious, political and economic discriminations and prejudice. All of the walkers have been and are on a journey—often rocky in nature. Nevertheless, the Knock Walk of the pilgrims is a reflection of their desire and prayer for reconciliation, peace and a society that values life. The Knock Walkers are an impressive group of people: the salt of the earth.

The writer carried out the walk partly to raise money to assist send young people to Lourdes in 2020. Any donations are appreciated and can be made to his Just Giving page at: http://www.justgiving.com/crowdfunding/lourdespilgrimagesholidays?utm_id=2&utm_term=gZbZkvpKp 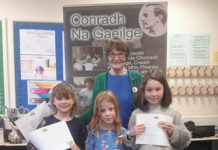 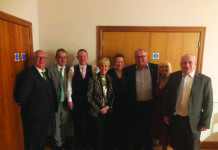