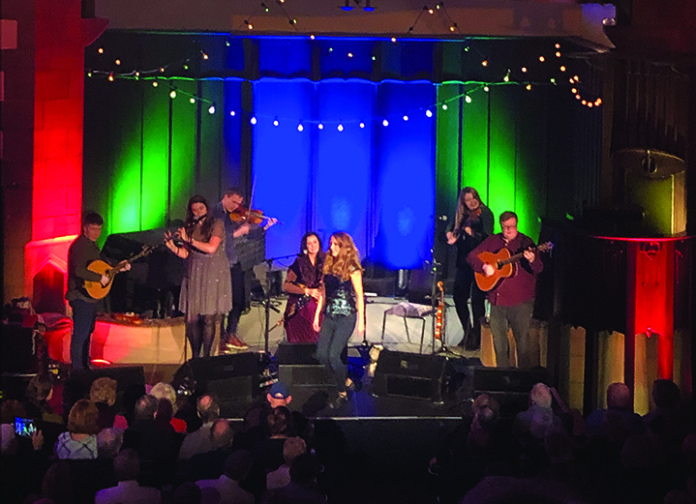 SLIGO-rooted band Dervish took to the stage of the Glasgow Royal Concert Hall on a well-attended Sunday evening for their gig at this year’s Celtic Connections festival. It was not the first time on this stage for the Celtic Connections regulars. The band has been playing together for over 25 years and has performed at venues across the world, including one impromptu gig on the Great Wall of China.

The six-piece band performed tunes from their 2019 album, The Great Irish Songbook, which reimagines several well-known Irish classics. Bubbly frontwoman Cathy Jordan provided easy chat in between songs: leaving a moment of silence before remarking: “I’m not meant to say anything until after we’ve played the first song,” as the band initially stepped out onto the stage.

The band was joined by various folk legends throughout the course of the evening. While much- loved singer Kate Rusby, who often performs with the band, was unable to perform at the last minute due to illness, this did not hinder the show. Vocalist Heidi Talbot, native of County Kildare, stepped in to fill Kate’s shoes. Despite comments from Cathy before she sang with Heidi that they ‘hadn’t had time to rehearse this one,’ the two voices complemented one another neatly.

Heidi is perhaps best known for her stint with Irish-American Celtic band Cherish the Ladies. Now living in Scotland and focusing on a solo career, Heidi performed a number of songs alongside Dervish at the gig. This included a particularly memorable rendition of the timeless tune which was last year voted Ireland’s favourite song, Raglan Road. Heidi’s effortlessly smooth vocals made this a captivating performance.

Next to join the band was Belfast singer Brian Kennedy, who greeted the audience with an arrangement of the enduring classic She Moved Through the Fair. This was followed by more tunes from Brian, for which he was joined by both Cathy and Heidi. Brian’s soft yet contrasting vocals provided a change of pace for the middle portion of the show.

The band began the second half of the concert with the title track from their 1999 album, Midsummer’s Night. A personal favourite of mine, Cathy announced that a rendition of the track that they had posted on social network TikTok had recently gone viral. It’s no surprise—the band’s performance of the reel was both an energetic and seamless one.

The second half of the show also saw the band unveil legendary American folk singer, described by Cathy as ‘the queen of folk,’ Peggy Seeger. Now 84 years old, her voice was as distinctive and extraordinary as ever. Peggy and Cathy performed together a charismatic rendition of Lolly Tudum, a song composed by Peggy’s late husband.

The final act to join Dervish was American banjo couple Bela Fleck and Abigail Washburn, who performed a few brief yet lively tunes before all the musicians joined together for the finale. The choice of The Parting Glass for the final tune rounded the show off in perfect harmony, showcasing the rich variety of talent among the musicians in style.

Tucked away in the west end of Glasgow, The Mackintosh Church was the perfect setting for Celtic Connections’ showcase of both Irish traditional band The High Seas and the Donegal-descended Friel Sisters. The unique venue provided a backdrop of trademark Charles Rennie Mackintosh colourful stained glass and saw the audience gather in the cosy pews that fill the church.

First to take to the stage was the Irish trad trio The High Seas. While still in their early days as a three-piece band, the group finds easy chemistry both musically and in their stage chat. This is perhaps thanks to the close ties between the three, with concertina player Caitlin and fiddle player Ciaran being husband and wife, and multi-talented vocalist, bouzouki and fiddle player Cathal their nephew.

The High Seas find their roots in more than one corner of Ireland, with Caitlin hailing from County Meath, while Cathal and Ciaran both originate from County Donegal. Ciaran beamed that the band were delighted to be playing in Glasgow. “And it’s even Burns Night tonight, so we’ve been told,” he laughed.

The trio played a wide variety of reels, some of which were accompanied by dancing from Caitlin—an accomplished Irish dancer, having toured the globe with Riverdance. Putting her concertina to one side and slipping into her dancing shoes at various points in the performance, this definitely made the band’s display a unique one.

The High Seas kept their set varied with changes in pace throughout. One of the most striking features of the band’s performance was undoubtedly Cathal’s vocals. Only 19-years-old and currently a music student at the University of Limerick, his vocal performance was truly flawless.

While The High Seas were certainly a hard act to follow, The Friel Sisters did not disappoint. Anna, Sheila and Clare Friel were born and raised in Glasgow, but have a keen interest in their Donegal roots. The girls achieve perfect harmony in both their vocals and their performance of the fiddle, flute and uilleann pipes.

It is clear from their performance that the sisters have been playing together for a lifetime and this subsequently comes as second nature to them. The girls’ repertoire of songs includes tunes that have been passed down through their family and tunes from their native Donegal.

The significance of their Irish heritage to The Friel Sisters is evident. The girls sang in Irish throughout the evening and animatedly told the various stories behind each of the songs they played, which clearly all held a place in their hearts.

Their performance of the song The River Kelvin, depicting a man leaving Ireland for Glasgow and crying into the River Kelvin at the thought of home, was one of the stand-out tunes performed by the sisters during the gig. The trio’s ties to both Scotland and Ireland personify perfectly the spirit of Celtic Connections of bringing together music from across countries and cultures.

The Friel Sisters joined together with The High Seas for the end of the show (above), both groups complementing each other happily. Rounding off with a rendition of a High Seas’ original, The Road to Donegal—and one last dance from Caitlin—the bands shared passions and collective talent made them the perfect combination.

Mairi Hughes is a columnist for The Irish Voice, a Journalist and Creative Writer