A NEW campaign to challenge anti-Catholic bigotry and anti-Irish racism in Scotland is calling on the multi-generational Irish community here to give their support at a public meeting aimed at launching the group’s efforts. 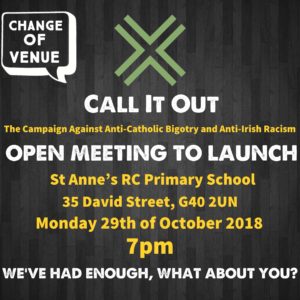 The Call It Out campaign emerged from discussions and meetings among concerned members of the Irish and Catholic communities in Scotland about the need for these phenomena to be correctly identified in Scottish society, including at governmental level.

With a steering group in place until the public meeting will allow the campaign to consult with the wider Irish and Catholic communities before officially constituting itself and beginning its campaign in earnest, support is being sought from across Scottish society—including from prominent political figures, Scotland’s political parties and the trade union movement.

The urgent need for such a campaign has only been reinforced by the reaction from certain sections of society, which has included threats leading to the first public meeting being forced to relocate after the chosen venue was intimidated into cancelling the booking. The meeting will now take place on October 29 at St Anne’s Primary School in Dennistoun at 7pm.

However, with a series of deeply worrying incidents targeted at the Irish and Catholic communities fresh in the public consciousness, such attempts to prevent the establishment of an effective voice to challenge this discrimination and intolerance in Scotland have only served to galvanise the nascent Call It Out campaigners.

Speaking as news of the campaign launch was shared, a spokesperson for Call It Out outlined the need for effective and constructive engagement in order to challenge anti-Catholic bigotry and anti- Irish racism properly.

“There has been a long-standing blight on life in Scotland: that of documented, and much less documented, manifestations and experiences of ethnic and religious bigotry, hate crime and inequality faced by Catholics and the Irish community in Scotland,” they said. “This multigenerational Irish community, which mainly but not exclusively intersects with the Catholic community, remains one of the few ethnic/religious groups without an organised and coordinated voice with which to speak to all levels of government and to highlight such bigotry and discrimination.

“This initiative is the first step in creating such an organisation so that we have a vehicle to engage constructively on both these matters. We are very keen to work with all progressive organisations, political organisations, community organisations and trade unions to address this issue and we will be seeking their support for specific initiatives.”

As with the multi-generational Irish community, the support and input of the Catholic community is similarly being sought by the Call It Out campaign ahead of their first public meeting, and Editor of the Scottish Catholic Observer, Daniel Harkins, explained the importance of such a step for Scotland’s Catholics.

“While many Catholics across the country have been outraged at repeated reports in the last year of discrimination in the workplace, anti-Catholic remarks by political figures, and the horrifying attack on Canon Tom White, that outrage is often unfocussed,” Mr Harkins said. “Hopefully the meeting next week can harness that depth of feeling and awaken Scotland to the more than a century of discrimination against the country’s Catholic minority.”

Speaking to The Irish Voice, a representative of Call It Out explained the need for community engagement and called for the Irish and Catholic communities to give their support to the campaign’s public meeting.

“Community engagement will be the vital first step in launching a campaign which can effectively challenge the issues identified by our steering committee,” the spokesperson said. “We call on the wider Catholic and Irish descended communities in Scotland to engage with our public meeting.

While discrimination and intolerance on racial and religious grounds can often be recognised within this ethnic/religious group, substantially, the fact that in the main, this community is more likely to suffer from poor health, poverty, unemployment and imprisonment than the general population, seriously requires to be critically addressed. By engaging with this wider community and hearing their experiences, perceptions and concerns, the campaign will also be able to effectively target areas where the need for equality for Catholic and Irish communities is greatest.

“While those already involved in the steering committee and at the earliest stages of the campaign bring a wealth of talent and experience, we recognise that by calling for the involvement of wider community groups, agencies and organisations (such as with the trade union movement, political parties and a range of groups and individuals already committed to tackling intolerance, bigotry and racism in our society) and in seeking their solidarity, the strength of the Call It Out campaign will continue to develop and create the conditions for the scourge of anti-Catholic bigotry and anti-Irish racism in Scotland to be recognised, identified and eliminated.”

Despite the difficulties in ensuring anti-Irish racism is dealt with outside of a sectarianism framework—with both the Scottish Government and anti-sectarianism organisations persisting in the misidentification of the phenomenon—well-established research has been done on the issue of
anti-Irish racism.

Worryingly, 93 per cent responded that they had not reported such incidents to the police, meaning that the scale of the problem is far greater than that recognised by authorities.

It is hoped by the multi-generational Irish community that the Call It Out campaign will be able to take on the fundamental challenge of bringing the issue of anti-Irish racism to wider attention, and encourage a public strategy for dealing with the issue by uncovering the true extent of the anti-Irish problem Scotland faces.