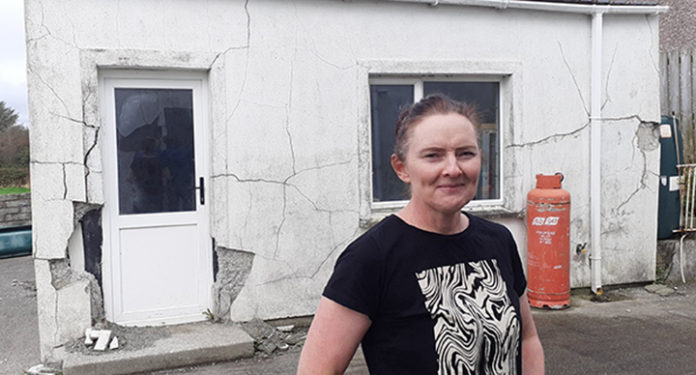 MICAS are a group of minerals that are found in rock, including rock taken from quarries. In this case, muscovite mica is contained in the building blocks used to construct the houses in the northeast of the country.

According to the 2017 Mica Action Group and the Report of the Expert Panel on Concrete Blocks, mica has the ability to absorb and store water and results in a disproportionate amount of water in the blocks. Estimates suggest that the presence of one per cent muscovite mica causes a reduction of the concrete strength by approximately five per cent and it has relatively poor bond strength with cement paste. The report stated that the presence of higher levels of moisture also cause issues during cold winters as the blocks are susceptible to loss of integrity in freeze-thaw conditions.

The presence of this mineral has caused large cracks and fissures to opens up in more than 5000 homes, the majority of which are in Donegal. Some homeowners have already had to move out of their houses because they have been deemed unsafe to live in due to the structural damage.

Regulations?
The expert panel—in its report to government in 2017—stated that masonry problems in Donegal and Mayo add to ‘the legacy of building failures or severe non-compliance concerns following the downturn in economic and construction activity in 2008, which exposed vulnerabilities in the building control system that was in place at that time.’

The 2017 report included clarification from the National Standards Authority that a one per cent limit applies to the quantity of mica or other harmful impurities in concrete blocks. This is covered by a statutory instrument. In a number of the impacted homes in Donegal, the levels in samples taken were significantly higher.

Any company placing construction products on the market has specific legal responsibilities that state they will not put a product on the market unless it has characteristics that satisfy requirements under regulations, such as Ireland’s Building Control Regulations.

The 2017 report stated that during the period under consideration, building control authorities did not have the technical resources in-house to test construction products which may have been non-compliant with the requirements of the Construction Products Directive. All enforcement activity was performed within existing local authority budgets.

The panel in its report recommended that ‘more meaningful on-site inspections and enforcement by building control personnel is required to ensure that standards are maintained as a necessary check and balance to requirements under the current building control system.’ However, it said it did not consider it was reasonable to expect that the building control authorities could have prevented the problem from occurring.

The panel also advocated that market surveillance authorities be sufficiently resourced with dedicated units which would have available expertise in the quarrying sector to provide effective enforcement nationwide.

Support for homeowners?
After a long campaign by impacted homeowners, the Defective Block Scheme was opened for applications in June 2020. It has five options ranging from external wall replacement (€49,500) to full demolition and rebuild (€247,500). The scheme allows owners to claim up to 90 per cent of the cost up to those limits.

Cabinet was told recently that 433 people in Donegal have engaged with the scheme so far.

Unhappiness with scheme
For a start, homeowners are required to pay €5000 for a mica test in order to apply for the grant scheme. Campaigners have said this is a barrier for families, some of whom are already struggling financially. They have also argued that the grants will not cover the level of work required on their homes.

They are calling on the government to cover 100 per cent of their costs, as they say €247,500—10 per cent of which they would have to cover themselves—will not cover the costs associated with demolishing and completely rebuilding a home, which is required in some cases.

Following the protest in Dublin on June of this year, which was attended by over 10,000 people, the Irish Government set up the Working Group to examine the issues highlighted by the scheme in its current format. This group was made up of affected homeowners with a background team of Professional People helping. The meetings were with government officials from the Department of Housing.

The process was frustrating and at the minute the talks have concluded and the homeowners have presented their final position paper to government. The government now have a big decision to make. Do they offer full support and 100 per cent Redress to affected homeowners the same way they did with the Pyrite affected families in Dublin and North Leinster? Or do they continue to treat mica families as second-class citizens.

We need everyone’s support across the world. This should not be happening in modern day Ireland. We would ask you to share our story and follow PaddyDiver4 on Twitter and 100% Redress No Less on Facebook.