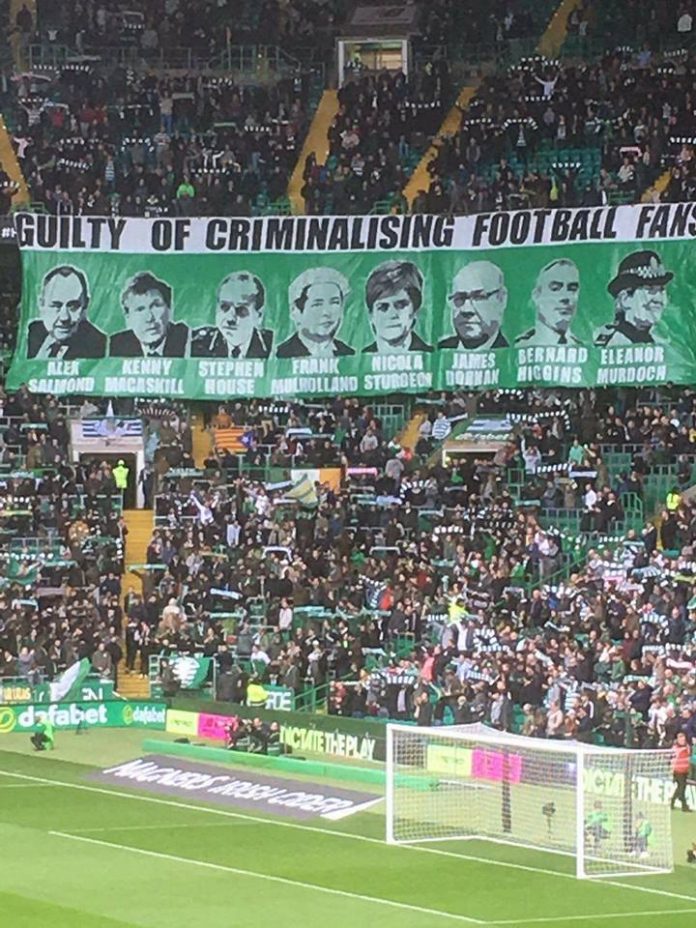 The bill, through which Kelly criticises the act as ‘an illiberal law,’ received support from all four opposition parties, and MSPs voted 65-61 in favour of repeal in January 2018. This represents the culmination of several years of campaigning by activists, led by supporters group Fans Against Criminalisation.

Yet it is clear that the act will not go away quietly. Senior SNP figures have publicly condemned the movement to repeal the legislation, claiming that opposition MSPs were driven by political point-scoring. Minister for Community Safety,

Annabelle Ewing, claimed that the vote in the Scottish Parliament to repeal the act ‘threatens to set us back as a country in our efforts to effectively combat prejudice, hate crime and sectarianism’ (Scottish Government News Release, November 2, 2017). Most recently, Alex Salmond—whose tenure as First Minister saw the introduction of the act—called the repeal vote ‘totally shameful,’ and claimed that it represents a backwards step in ‘tackling sectarianism’ (The National, February 14, 2018). The irony of claims of ‘political point scoring’ relating to the repeal of an act that was politically-motivated from the outset has not been lost on observers.

The act’s various flaws have been written about extensively and it is not necessary to repeat these here. What is important is a reflection on what will happen next. The act may soon be consigned to history, but the issues that have caused so much division have certainly not been resolved.

For one thing, the relationship between football supporters and police has deteriorated significantly. In research conducted for my recently completed PhD on sectarianism in Scotland, participants spoke of feeling constantly under surveillance and experiencing intimidation and harassment by police when attending football matches. This, unsurprisingly, disproportionately affects younger, working class supporters, and real effort from the police will be required to rebuild t his trust.

Damage to the lives of those affected by the OBFA—often young males who had no previous encounters with the criminal justice system yet found themselves with convictions and criminal records—cannot be undone.

Moreover, debates on the question of political expression in the context of football will continue beyond the act. This has particular ramifications for the Irish diaspora in Scotland, especially those for whom Celtic Football Club represents an important site for the expression of their Irish identities. The act undoubtedly targeted the expression of Irishness at football. In my research, several participants spoke of being warned by police for carrying an Irish tricolour.

One participant spoke of walking into a stadium with a friend and being stopped by a police officer who asked to see the slogan on his friend’s scarf. His friend explained that the words on the scarf were merely the name of his supporters’ club, however the police officer called over one of his colleagues and asked him: “Is this offensive?”

After some discussion between the police officers, no action was taken. However, in another case, a research participant was arrested for singing the Irish national anthem, which was deemed ‘a sectarian song,’ by the arresting officer.

The subjective nature of offensiveness and the lack of clear guidance on what the legislation actually covers means that police officers have become the ‘arbiters of offensiveness.’ These problems—in my view—stem from an understanding of sectarianism that neglects historical context and in particular pays insufficient attention to historic power relations between Britain and Ireland or the experiences of the Irish who settled in Scotland. The absence of this context has, arguably, led to the criminalisation of certain Irish identities in a football context.

I strongly believe that there is a class issue within this debate. One way in which this has been evident is the example of the commemorations of the 1916 uprising in April 2016. There were a number of events marking the uprising: lectures; book launches; and documentary film showings at the Centre for Contemporary Arts. Quite rightly, these events attracted little or no attention from the authorities. SNP MSP James Dornan, who on social media has been extremely critical of those backing the act’s repeal, attended an event marking the role Scots women played in the 1916 uprising.

First Minister Nicola Sturgeon tweeted in December 2017 about Countess Markievicz, an Irish Nationalist revolutionary who took part in the uprising.

Yet this positive ‘elite-led’ commemoration of 1916 ran counter to attitudes by the state towards other forms of remembrance by the Irish diaspora. For example, in April 2016 Police Scotland issued publicans in Glasgow with written ‘guidance’ relating to concerns around ‘sectarian activity’ at commemoration events. Pub owners were warned not to display ‘politically motivated items,’ including flags and banners, when hosting remembrance events.

Returning to the example of football supporters, there has been an intolerance of those fans who have used the sport as a forum to mark the event —or other aspects of Irish Republican history—through songs or other symbols (above). The OBFA has been central to policing this. Among its various functions it has been an instrument through which to ‘police values’ through the delegitimisation of expressions of certain identities and cultural practices.

Supporters are frequently intimidated by police and can be arrested for singing Irish Republican songs or displaying particular symbols at matches, as previously discussed.

This raises questions about what forms of commemoration of Irishness or Irish history are acceptable in Scotland today. I suggest that there is a distinction between elite-led or sanctioned ‘celebrations’ such as those mentioned above, which take place in what could be described as middle class cultural spaces, and more public displays of Irishness. The context in which these debates are taking place is one in which some forms of Irishness are still considered to be incompatible with Scottishness.

This is not only the case for expressions of Irish Republicanism. It has also applied to public displays of Irish national identity in recent years through the denial of ethnic minority status. In 2015, following a request for funding for a St Patrick’s Day parade, former Labour MP for Paisley and Renfrewshire North Jim Sheridan argued that the Irish should not be regarded as an ethnic minority and public money should not be spent on this type of cultural activity.

He stated that ‘people need to look forward, move forward and think of a modern Scotland and stop living in the past’ (The Herald, February 25, 2015). In a ‘modern Scotland,’ it is acceptable, it seems, to attend a commemoration of participants in the 1916 Easter Rising at the CCA, but not to hold a banner commemorating those same individuals at a football match.

The repeal of the act will not put to bed this question of political expression within the context of Scottish football. The Irish diaspora, particularly those for whom football is a site for the expression of this aspect of their identities, will still have to contend with these issues.

Maureen McBride is an academic who has recently completed a PhD, entitled Rethinking Sectarianism in Scotland, at the University of Glasgow. She most recently co-edited and contributed to No Problem Here: Understanding Racism in Scotland, a book published by Luath Press in January 2018