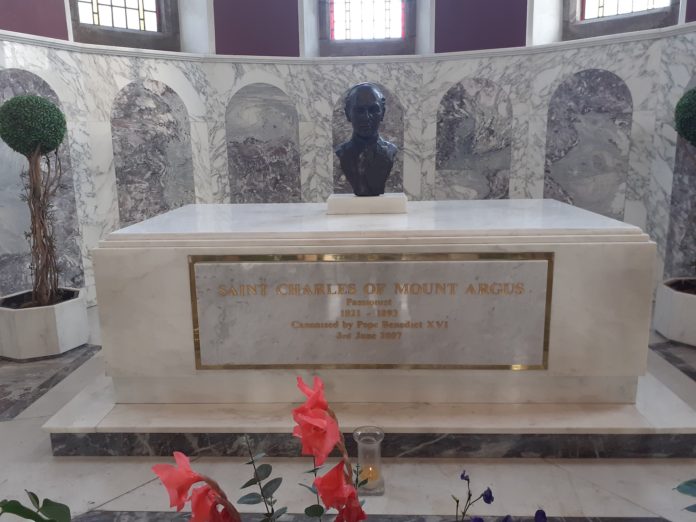 IF CATHOLICS were asked to name their favourite saint, then St Antony of Padua would probably be near the top of the list. Who among us has not been helped by him to find a lost item? Just don’t forget to thank him by putting some money in the St Antony’s Bread Box for the poor!

On the other hand, if you were asked to name a recent saint who particularly stands out for their compassionate work among the poor, you might say St Teresa of Calcutta. Good answer! A remarkable and inspiring saint from recent history who took to heart the Gospel command to put love into action.

However, if you were asked to name the most recent Irish saint to be Canonised—that is, officially declared to be a saint by the Pope —who would you say? Quite a difficult one, is it not? Yes, it is, and that’s probably because most Irish saints—if not all of them—lived around the first millennium. Well, I am not going to labour this holy quiz any longer, and tell you that the most recently Canonised Irish saint was actually a Dutchman. Yes, you heard that right!

John Andrew Houben was born in Munstergeleen, in the Netherlands on December 11, 1821 and joined the Congregation of the Passion (the Passionists) in Belgium in 1845, taking the religious name Charles of St Andrew. He would eventually arrive in Dublin in 1857, after several years in various Passionist houses in England, and he would go on to spend almost 30 years at the Passionist Monastery, at Mount Argus. He died in Dublin on January 5, 1893 and Pope Benedict XVI Canonised him St Charles of Mount Argus on June 3, 2007.

Now, many of you reading this may never have even heard of him, unless of course, you come to the Passionist church in Glasgow—St Mungo’s—or have been to his shrine at Mount Argus, but his relative anonymity in the Church today would be typical of the man in life, who was remarkably unassuming, quiet, and humble among his own religious community; they saw a good and prayerful man but nothing remarkable.

Yet, paradoxically, this insignificant Passionist priest would go on to attract thousands of people to Mount Argus throughout his life from all over Ireland, Scotland, England and even the US. All would make the journey to ask for a blessing, his prayers and ultimately hoping to be healed. There are many documented and medically inexplicable healings, and even today letters arrive at Mount Argus telling of graces received through the intercession of this holy man. St Charles—this ordinary man of prayer—had been graced by God with an extraordinary gift of healing.

However, this saint of the poor and suffering was not unaccustomed to suffering and sickness in his own life, often referring to himself as ‘poor old Charlie.’ Some of his physical suffering was self-inflicted, through clumsiness, such as when he fell into the hole a workman had left uncovered because he wasn’t looking where he was going—he was so immersed in prayer even as he walked—but other injuries were accidental, such as the time he fractured his foot in a collision between two carriages, and which would debilitate the man for the rest of his life. Added to his physical ailments, he also had interior suffering such as the misunderstanding and humiliation he bore from 1866-1874, when he had to leave Dublin and go back to England, due to the growing suspicion and controversy surrounding his reputation for healing. This was made worse when some unscrupulous characters made some money from water he had blessed, forcing Archbishop Cullen to ask the Passionists to move him elsewhere, with the sin of simony hanging over him unjustly.

The reason I am sharing the story of this holy Irish/Dutch saint with you is because Pope Francis has given the Passionists a Jubilee year to celebrate the bicentenary of his birth. Therefore, from his birthday, December 11, 2021, until his feast day, January 5, 2023, the Pope has granted us a special holy year, to be celebrated both at his shrine in Mount Argus and at his birthplace in Munstergeleen.

The Archbishop of Dublin, Dermot Farrell, inaugurated the Jubilee year by opening the Holy Door in the Mount Argus Church. However, if you are unable to travel to his shrine in Dublin, we have a weekly Novena Mass in honour of St Charles of Mount Argus which is celebrated every Saturday at 12.15pm in St Mungo’s Church, Townhead, Glasgow, which includes special Novena prayers and a blessing with a first-class relic of St Charles. Perhaps
in these times of suffering, Ireland’s newest saint might be an instrument of God’s compassion and healing for you?

Fr Antony Connelly CP is a Passionist Priest currently based in St Mungo’s, Glasgow. You can follow him on Twitter: @BrotherAntony