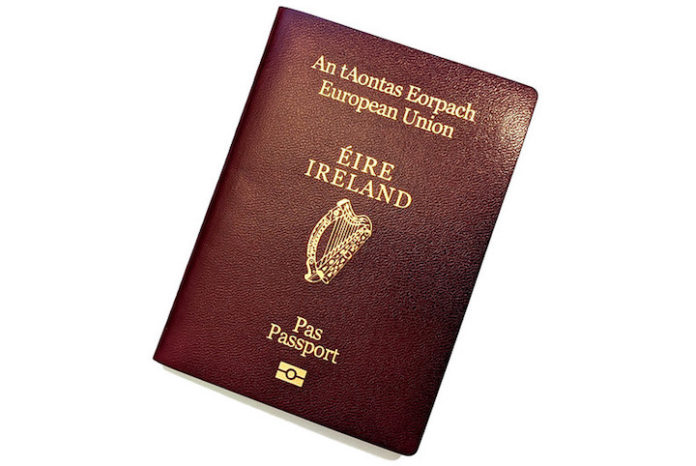 FOR a number of years, the percentage of the population in Scotland which held an Irish passport was fairly modest—driven by generations of Irish emigration to Scotland—but the numbers of passport holders has risen dramatically in relation to the size of the Irish population as a direct result of Brexit.

For many people born in Scotland of Irish heritage, the idea of having an Irish passport is about retaining a link to the Emerald Isle and recognising the right to be considered an Irish citizen as well as that of Scotland. This was probably the main reason for a person resident in Scotland to apply for an Irish passport—that was of course prior to 2016 and the Brexit vote. Now the benefits of holding an Irish passport include the right to be considered an EU citizen, to travel and work freely in the EU, to be able to own property in other EU member states without a permit and, of course, shorter queues at immigration checks when travelling to an EU state. As a result, applications have soared.

Back in 2013 when there wasn’t a notion of Brexit and all eyes, politically speaking, were on the Scottish independence referendum, there were just 45 applications from Scotland for an Irish passport through the Irish Consulate in Edinburgh. In 2018 there were more than a thousand such applications.

It is true that the number of people applying dipped slightly in 2019, given that many who felt they would need an Irish passport for their own purposes would have already by now secured one, but also there was a sense of optimism for a while that ‘Brexit might not actually happen’ or indeed won’t be as restrictive as had been reported.

Application numbers certainly started to rise again throughout 2020 and indeed into 2021, however Covid-19 has thrown a spanner in to the workings of the passport application process.

Comhaltas in Britain took the decision to offer advice for those seeking to secure an Irish passport shortly after the Brexit referendum. The number of enquiries for further information had been steadily increasing into and including 2018. Numbers were fairly low during the initial surge of the Covid-19 pandemic—one might say that with no travel, few were thinking of passports and this may be true—but in Autumn 2020 right through to the present day, enquiries have been steady (on average 10 per week) from people seeking information regarding eligibility and advice on the process, showing that there is a huge appetite to obtain an Irish passport.

In order to hold an Irish passport, there are fairly straight forward eligibility requirements. If you, or one or more of your birth parents were born on the island of Ireland (Northern Ireland or the Republic of Ireland) then you are already entitled to Irish citizenship and can apply for an Irish Passport immediately.

If one or more of your grandparents were born on the island of Ireland, then you can register to become an Irish Citizen through a process called ‘Foreign Birth Registration’ and once this has been obtained, you are then free to apply for an Irish passport.

Aside from this criteria, the only other eligible way is through naturalisation—being resident on the Island of Ireland and/or being married to a citizen and having lived three out of the previous five years in Ireland and be able to prove residency across this period.

The process of applying has become much easier in the past through years thanks in no small part to the online passport service. This service allows for applicants—even first-time applicants—to successfully order their passport and they are then instructed to forward on the relevant supporting evidence for their application, such as applicant and parents’ birth certificates where required.

Of course the pandemic has had an effect on the application process and, in this instance, it has rendered the Passport Office in Dublin closed during Level 5 restrictions in Ireland, which have been in place since December. Online applications are still being accepted, however, as are applications in postal form—including those utilising the passport express service courtesy of the Post Office on West Nile Street in Glasgow.

The promise is that once Level 5 restrictions are eased in Ireland—currently scheduled for this month—the passport service will be back up and running and the team will be working through the backlog of applications. One thing is for sure though, a large percentage of applications will be from Scotland.

The Passport Online service can be found at: https://www.dfa.ie/passportonline

Further information can be found via Comhaltas in Britain’s Irish Passport information page—including details on where to obtain certified copies of birth/marriage certificates—at https://www.comhaltas.co.uk/passport-application