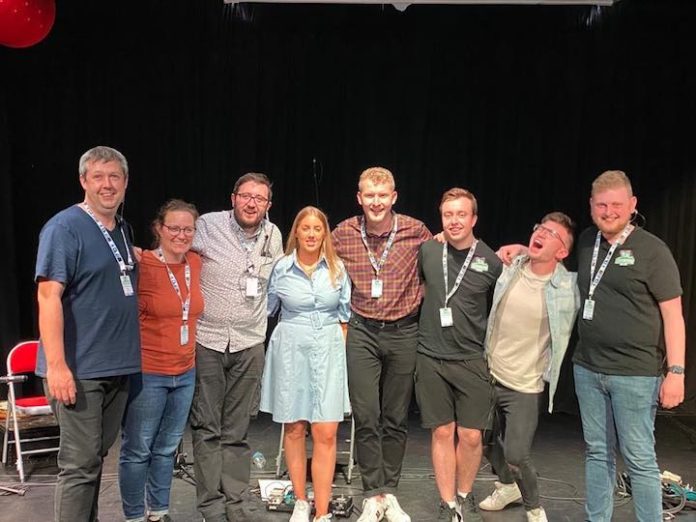 ON THE last weekend in June, all musical eyes were on Coventry for the Féile 2021 event produced by Comhaltas in Britain in partnership with Coventry UK City of Culture trust.

That last weekend is traditionally the time that the All-Britain Fleadh is held—attracting competitors from across Britain and audiences from further afield—but for the second year in a row due to the ongoing pandemic, rather than let the weekend pass, Comhaltas has brought an even bigger event to the fore.

Planning for the weekend began early in the spring at a time when the restriction levels were beyond predictability, with this in mind planners for the Féile worked overtime to plan three different scenarios ranging from complete lockdown, where all events would be exclusively online, to a festival which was open with little to no restrictions in place.

In the end, the resulting Féile was somewhere in between, where a host of events were broadcast live on location from Coventry to a small invited audience and beamed worldwide over the internet to a much larger crowd.

Friday June 25 saw the opening concert featuring the inimitable Michael McGoldrick and Dezi Donnelly with Ed Boyd, Glasgow based BBC Radio 2 Folk Award winners Ìmar and the newly crowned ‘Fiddler of London’ Meabh Smyth joined by her brother Tiarnan. For the small-invited audience of around 50 people present in the Albany Theatre in Coventry, it was an absolute joy with an electric atmosphere. For the thousands who tuned in online, whilst the music and song was exceptional, they would have longed to have been one of the lucky ones to get a golden ticket to be there in person.

Saturday morning showcased some of the fantastic talents of the Irish community in Coventry and further afield with presentations in Irish sport, dance, music, song, and even baking—yes you read that correctly! Cameo appearances featured representatives of the GAA and Comhaltas based in Scotland and whilst this was an enjoyable watch for the multi-generational Irish community tuned in, it was surely an educational one too for the wider community across Britain who chose to watch.

On Saturday evening, we all went ‘to the pub’ or more accurately the Albany theatre studio for a pub-styled session featuring music song and dance and for many this event was the highlight of the weekend. Seven young artists from across the UK—three based in Scotland, Mohsen Amini, Catherine McGoldrick and Benedict Morris—performed as part of the house band for a great evening of ceol agus craic!

The age of the artists involved certainly did not reflect any lack in quality and helped to reaffirm the belief that Irish culture is in safe hands with the current crop of young musicians, singers and dancers and is a further indication of even greater things to come from future generations inspired by such a homely yet inspiring celebration of culture.

Sunday June 27 saw the last event of the Féile 2021 event—the All-Britain final of the Online Comhaltas Competitions (OCCs)—a programme of events commissioned by Comhaltas in Britain to fill the competitions void left as a result of the Covid-19 pandemic.

Attracting over 500 entries across Britain, the OCC’s were a resounding success, giving a focal point to young ceoltóirí to hone their talents and aim for, whilst providing expert feedback from adjudicators—something which is so important given that many have not even had interactions with their tutors in person for almost 16 months.

Creative people will always find creative ways of working and whilst the pandemic has ultimately been hugely damaging to so many sectors, it has also spurred many on to finding new ways to reach their audiences. The arts have been no exception to this rule, with many people becoming semi-pro with regards their abilities to produce video content—something that prior to the pandemic was reserved almost exclusively for professionals only.

The small team from Comhaltas in Britain who worked on Féile 2021 (above) have proven just that with the online audience over the weekend soaring past the 300,000 mark and some of the content from the event being re-broadcast on television in Ireland on the TG4 channel.

The success of the event has raised the question of ‘what is in store next year?’ Whilst we all long to a return to in-person events at full-capacity and resuming the Fleadh schedule, it’s also clear that there is a captive audience ready and waiting to enjoy more content streamed online.

As they say in showbiz… watch this space

NB: The organisers pictured above were operating in a bubble