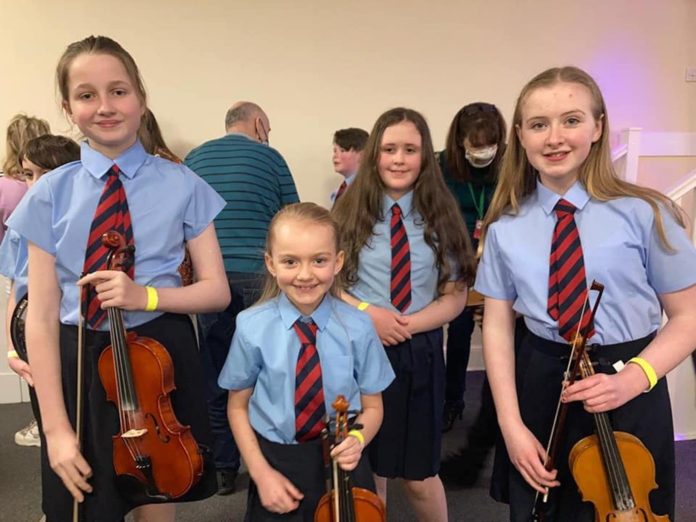 TRADITIONAL music and song is well and truly back with a bang after a fantastic weekend at this year’s Feis Ghlaschú at the end of February. The Feis (Fesh) is one of the oldest established Irish organisations in Scotland having been founded in 1902, and they have operated events every year since with the exception of 2021 due to Covid-19.

The music and song feis took place in a new venue this year—St Columbkille’s Parish Centre in Rutherglen—which proved to be a great venue welcoming musicians and singers young and old, from those who hadn’t seen friends for nearly two years, to those competing in their first event.

One of the highlights every year is seeing all the young Under 12 bands taking part and it was particularly pleasing to see six bands participating this year, with two of those sporting musicians who first began their musical journey at home via Zoom lessons.

Whilst their introduction to traditional music may well have been unconventional, it really does highlight just how much amazing work has been done over the past few years in the most challenging of circumstances and it is such a positive sign for the future that there are so many young keen musicians learning and showcasing their musical
heritage.

A unique feature of the feis are the play-offs—a competition featuring the winners of each solo competition for each age group where no one wants to be the adjudicator! Judging the very best competitors in each age group and picking an overall winner is quite the task!

Without doubt the play-offs are a highlight of every feis and a huge congratulations go to the four eventual winners—April MacAulay, Orla Bruce, Cara Conway and Calum McGregor—all from Irish Minstrels CCÉ. Another individual from Irish Minstrels left the feis with a prize and that was branch Chair Frank McArdle who was given a special award commissioned by Feis Ghlaschú to mark their 120th anniversary year—and with Frank being responsible for so many participants taking part in the feis over the years through his teaching at St. Roch’s, no one could argue Frank is a worthy recipient of this special award.

As well as being its own event organised by a dedicated committee, the feis also acts as a great practice run for Scottish based musicians who are competing in the Comhaltas Fleadhanna competitions this year with the Scottish Fleadh scheduled to take place on the April 24.

For those who are successful in qualifying to the All-Britain Fleadh this year, they will be travelling to Brunel University in London on the last weekend of June for the event. Those who go one stage further and qualify for the All-Ireland Fleadh will head to Mullingar in the first week in August—a week earlier than normal for the flagship event.

For those interested in the dancing feis, this year it takes place over the March 5-6 in Maryhill Central Community Halls in Glasgow.

For lots of seasoned musicians and singers, the feis was an opportunity to ‘get back on the horse’ and experience taking part in music competitions once again. For the young musicians who took part in what was their first event, this years’ feis, will have been an experience they will never forget!