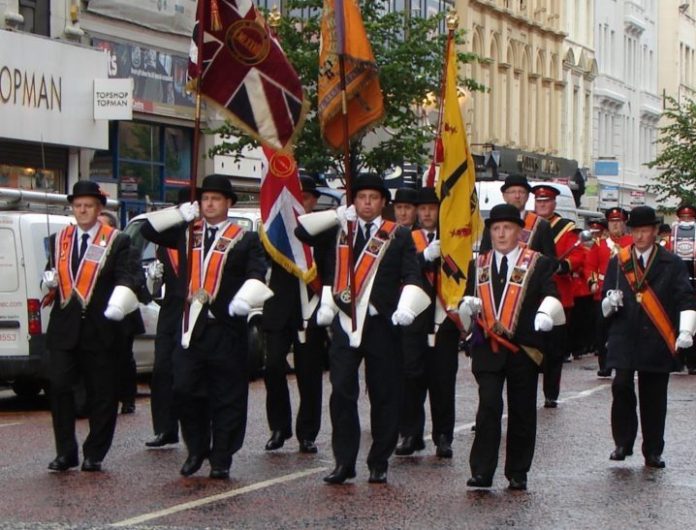 ‘HATE can hurt, but never win’ was John McAreavey’s dignified response to the vile and despicable actions of Orange Order members in Dundonald Orange Hall who sang a ‘wee ditty’ mocking his bride Michaela’s murder while on honeymoon in Mauritius.

While the great and the good of the Orange Order were quick to express horror at this event, this is not enough. What does it tell us about the Lodge that hosted this event? The song was known by most of those present who cheered and clapped and banged tables as it was sung. Surely some of the Lodge’s leadership were present and ought to have intervened unless they approved of it? Is anyone surprised to learn that a coach for Linfield FC was one of those prominently singing?

What is the Orange Order?
The Orange Order is the most important voluntary association for Protestant dominant ethnic groups in Ireland, Scotland, historically in Canada, specifically Ontario and, to a lesser extent, the north west of England.
Named after William of Orange, the Protestant Dutchman who defeated the Catholic King James II in1688. It grew out of 18th century Protestant vigilantes, like the ‘Peep O’Day Boys,’ who were set up to fight Catholics. Opposing Catholics is in its DNA.

Its greatest strength lay in how it brought together people who usually distrusted each other such as Presbyterians and Methodists. It could legitimately argue that it was the one organisation apart from the Monarchy that unified Protestants. The Order still sees itself as a unifying force in Protestant communities.

The Orange Order held substantial power and influence in the north of Ireland. Every Prime Minister from Partition in 1921 to the return of direct rule in 1972, was a member, and nearly all Ulster Unionist Party MPs count themselves as members. It presided over a ‘A Protestant Parliament and a Protestant State.’

Decline
The organisation is in decline. Membership is predominately pale, male, grey and stale. Orangeism, peaked in the middle of the 19th century in Ireland, Scotland and, Ontario and Newfoundland in Canada following a similar
trajectory to the Ku Klux Klan in America.

Membership has fallen by nearly two thirds since the late 1960s and is now at an all-time low. Its leadership claim that the decline is part of a wider trend of loss of interest in religious organisations among people. The Grand Orange Lodge of Ireland, claim that there were 100,000 members worldwide but in reality, there are about 36,000 members in Ireland.

Evidence of this is stark. At its peak the Orange Order could muster bands and walks in almost every town in the North of Ireland on the 12th of July. Now several lodges have to merge with others under the umbrella of district lodges to manage a walk. Those who do walk in full regalia tend to be men over 60.

The decline is caused by pressures from within and external to the organisation. Members have expressed concerns about the organisation getting too involved in the current anti-Protocol rallies as they did with the flags dispute nearly ten years ago. They claim it places the organisation on the losing side of arguments over their future.

The current Grand Secretary Reverend Melvyn Gibson is less interested in modernising the organisation than his predecessor Drew Nelson who at least tried to make the organisation relevant by enhancing its cultural and historical aspects by opening two Orange museums and allowing Orange halls to be used more widely in the community.

Younger members are challenging the organisation’s archaic freemasonry ceremonies and titles and more importantly the sectarian rules such as the ban on attending Catholic funerals and weddings.

The Orange Order hierarchy appear content to have Orangemen as fee-paying paper members only, which has resulted in stagnation in many lodges.

Best of British
The Orange Order promote the civic pride associated with Protestantism. This is at odds with what takes place on the 12th. There is a huge drinking culture at parades. The Belfast parade in particular has come in for criticism due to having Loyalist paramilitary trappings as part of the procession. The cameras focus on the bowler hats, collarettes and Lambeg drums but look at those who follow in their wake. Many parade drunk and dishevelled in tacky jeans and tracksuits—looking anything but the ‘Best of British.’ They sing the first part of the British national anthem with gusto but they trail off as they don’t know all the words or perhaps they are too drunk to remember.

The walks are only one part of the 12th celebrations. The walks are supposed to end with a rally where members and supporters congregate to listen to speeches and meet other members. The rallies take place, but most members take themselves off to meet family and enjoy lunch. The platform speeches will mainly be listened to by small groups of disinterested people.

This year the BBC cancelled live coverage of the Twelfth. The usual talking heads of Ian Paisley, Jim Allister, and Jamie Bryson expressed outrage. Remarkably none of them are Orangemen.

No longer ruling the waves
The Orange Order has struggled to come to terms with the collapse of the British Empire in the 1950s. England generally embraced multiculturalism which had the effect of marginalising ethno-nativist groups such as the Orange Order and its supremacist tendency. Protestants in Ulster turned to the Orange Order to establish a more ‘homegrown’ sense of ethnic Briton identity as per their settler culture.

What is causing the decline?
Secularisation of British society is one reason for its decline as is the societal shift from conservative to liberal values indicative of a general decline in the prestige of the British monarch and loyalty to crown. The rise of non-British immigration has weakened the grip of the Anglo-Protestant hegemony as has the general decline of religiosity.

Socially its decline mirrors the global decline in volunteerism, and the increase in social isolation. People are finding alternative ways to connect and find ritualistic activities less appealing. There are many alternative and immediate forms of entertainment that compete with traditional weekly band practice too.

There are also practical reasons for the decline; people’s work patterns, the move to suburbia and the lessening need of fraternal links to get a job.

The Orange Order as an organisation doesn’t do itself any favours. It feels jaded, its leadership lacks inspiration. It is expensive to join and then members are frequently tapped up for additional monies. People feel the organisation is no longer in touch with their mood.

The Good Friday Agreement and the resultant cross border and cross community events have all colluded to lessen the need and value of the Orange Order for Protestants. The relatively young Police Service of Northern Ireland has improved relations between the state and the Nationalist-Catholic community which has had the unintended consequence of further weakening the lure of the Orange Order.

Closer to home, the Orange Order in Scotland while also in decline is doing so more slowly than in Ireland. Its membership is small and concentrated on the west coast. Membership is less than two per cent of Protestants except in Govan and Rutherglen. The Orange Order never got a foothold in Scotland, possibly as a result of the influence of Celts in the Scottish Highlands who never held the English monarch in the same esteem as the Order and the wider Protestant community do in Ireland.

Supporters of Scottish independence tend to blame Westminster for all the ills of Scotland, but one positive has been the influence of the English and their less sectarian worldview, which has left the Orange Order less relevant in Scotland than ever before.

Designed to halt the decline and widen its appeal the Orange Order opened the Museum of Orange Heritage. This attempt to rebrand itself as an open, inclusive institution has been received with great indifference. They have tried other gimmicks too such as ‘Diamond Dan’ the Orange Order’s family friendly superhero mascot designed to attract tourists for the failed ‘Orangefest’ festival. None have worked and its decline will continue as it has done in all regions where it existed since the 1950s.

This decline is now positively associated with the overall decline of the Protestant population and the increase in the Catholic population in Ireland. There is little new blood in the organisation, those who join up tend to do so out of family tradition.

No future?
Orangeism was so integral to Irish identity that it is even used in our flag. The flag that proclaims the goal of peace between the Orange and the Green was a noble one. But is it not time for a new flag?

The incident at Dundonald reminds us that the bigots have not gone away. Why should we celebrate and respect those who wish to be knee deep in our blood?