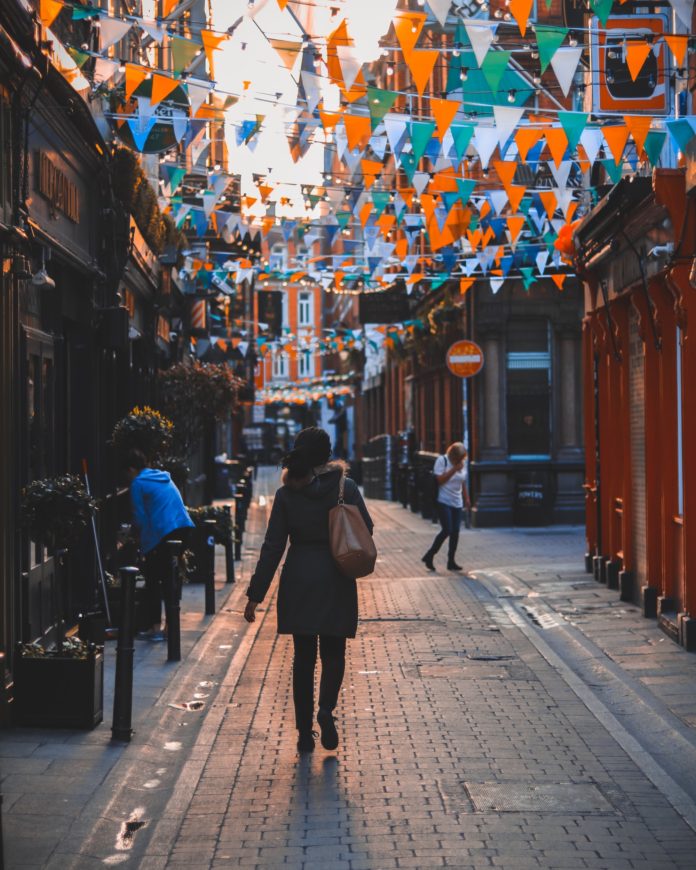 ONE of the most hilarious skits and a personal favourite of mine is the one Tommy Tiernan does about the Irish and their relationship with ‘the drink.’ “When things are getting serious is when we need a drink the most,” he says. “It’s one of the reasons why we put St Patrick’s Day in the middle of Lent. We knew we could never go 40 days and 40 nights on pancakes! We’d need a half-time during Ramadan so we would.” Well aint that the truth?

My thinking in midlife is this: life is way too short and can be hard enough at times to be giving up anything, well the good stuff anyway and particularly when it’s disguised behind the façade of losing a few pounds or detoxing your liver. My ethos bends more towards doing something a bit more practical during Lent—doing a good deed, giving more to charity, giving more of your time, helping others who need it, saying a prayer for those who need it, volunteering for a worthy cause… you get the picture. In saying that there’s plenty of not so nice stuff you could give up, like gossiping and bad mouthing people, whinging and moaning and giving out about futile things that on the grand scheme of things really don’t matter—small stuff. Being unkind and judgemental of others, these are all things to be ‘given up’ and not just for lent; for life. So be kind. Just be kind.

Because I’ve grown up giving stuff up for Lent, I’ve always looked forward to St Patrick’s Day and a bit of a blowout, especially when I was a child and I’d be off the sweet stuff. So come Paddy’s Day I’d be like yer man, Augustus Gloop gorging and I’d have half a dozen bars of Dairy Milk, a quarter of Strawberry Bon Bons and ten Highland toffee bars done in by lunch time. As a teenager, at Holyrood, I always went hell for leather and did the whole shebang—a sweets, crisps and fizzy juice abstinence, plus attending Mass at lunch time. Yip, complete Lent overload. Then I’d go to my Granny and Granda Kelly’s house in Hickman Street, Govanhill, where my Granny would serve up a pie and beans, a highly sugared doughnut from Reg’s Bakery and five decades of the Rosary—on our knees I might add—including the Hail Holy Queen and The Memorare to round it off. I’d then return to school feeling utterly despondent and confused of course because I’d eaten a doughnut, but it was okay because I’d said hunners of prayers to mask the guilt!

By the time I left school and was a young drama student, I found myself on the wrong side of the bar on Paddy’s Day when I’d be pulling pints of Guinness for thirsty, desperate Irish men who’d been off the drink for lent and were climbing the walls for a pint. I saw some sights by the end of Paddy’s Day let me tell you—but let’s not go there. My lips are sealed.

When I think of a special and particularly memorable St Patrick’s Day, it has to be the one I spent in New York, which I’m sure many of you will have experienced. We stayed in a place called Leo House, a clean, affordable Catholic guesthouse for travellers located in the Chelsea District. It had it all, chapel, library, morning mass, single beds—saying nothing —and the nuns made the most amazing breakfast of porridge, followed by pancakes, eggs, crispy bacon and maple syrup, which was to absolutely feckin die for by the way!

Each morning we ventured far and wide walking the length and breadth of New York city, absorbing the extensive and varied foods and cultures this multi-cultural vibrant city had to offer. We ate Vietnamese, Cajun, Italian, South American, Indian, New York street food… and of course we ate Irish on Paddy’s Day—spuds, cabbage and bacon.
Somehow, almost nightly we’d magnate to a pub called McManus’s Café on Seventh Ave, and on one of those nights I recognised two faces… instantly. Irish actor, Sean McGinley (Gangs of New York, Braveheart, The General) and his wife Marie Mullan (Druid Theatre Company). Marie was starring in Martin McDonagh’s play, The Beauty Queen of Leenane on Broadway, which I’d been to see the year prior at The Royal Court Theatre, London, so I felt confident and a tiny wee bit equipped to approach them for a blether. Marie had just come off stage so was relaxed and chatted freely about the play and how they’d moved to New York for a year whilst she completed her run. Sean was off duty and content enough to be having a pint in an Irish bar that reminded him of home. They were impressed I’d already seen McDonagh’s trilogy.

What I distinctly remember about this encounter was two very laid back, unassuming Irish actors who still had their feet firmly on the foot rest of the bar and their heads still attached resolutely to their hard-working, grounded shoulders. There were no airs and graces, no actor bullshit and this impressed me no end. Marie went on to win a Tony Award for her performance. Need I say more?

On the morning of the 17th we had to leave Leo House at 7.30am in order to get to the cathedral to be guaranteed a seat at Mass which was celebrated by Archbishop John Joe O’Connor. Dana, Ireland’s own Eurovision Queen, was invited to sing which added something of a celebrity touch to the proceedings. I remember us sitting behind a row of octogenarians, both men and women, who donned emerald green crocheted hats and had bunches of shamrocks the size of small trees growing from their chests—all potential extras from The Quiet Man I thought. When Dana sang Our Lady of Knock, the hairs on my arms stood to attention alongside the Fighting 69th Irish Brigade who were in attendance. The crew in front of us stood, their right hands fisted hard against their chests—all of them proud to be Irish and proud wearing the green. It was a deeply emotional experience.

After Mass we moved outside and took our spot on Fifth Avenue amidst two million other revellers for the parade, which is the oldest (established in 1762) and the largest (150,000 participants) in the world and run purely by volunteers from generations of Irish families who emigrated to the US and began organising the parade as a celebration of St Patrick and their culture. The streets were quite literally alive, like a colony of singing dancing green ants waving Irish flags and cheering on the NYPD, NYFD, pipe bands, Irish dancers and the military who are all represented.

Now I’m going to be fairly blunt here, because as much as I appreciate a man in uniform, and I do, I really do, but I remember feeling, after watching thousands of them go marching by, that the view became somewhat monotonous; well, you’ve seen one man in uniform you’ve seen them all right? I guess I was hoping for and expectant of something a tad more Disneyesque, you know, big colourful floats with a giant St Patrick being paraded along like a Marvel superhero in sparkling emerald green and gold vestments holding a giant mitre like King Triton, (Ariel’s dad in The Little Mermaid). A bed of snakes at his feet—not real of course—rubber or inflatable ones would do rightly. They could have the younger Irish dancers dressed as leprechauns and fairies sprinkling magic fairy dust over the crowds the way Tinkerbelle does—or even better handing out free Guinness shots (I’m joking of course). I also feel, and quite emphatically too, that there’s an opening for a damn good ceili band or two to liven things up. Make it a bit more diddly diddly rather than the big bang drum. I can just see All Ireland Champions, The Blackwater Ceili Band up there batterin’ out The Cappataggle Shuffle, followed by a group of set dancers hookin’ chookin’ and ceili swinging their way up Fifth Avenue.

I mean even in Moville town centre, Donegal, we had our very own parade and a St Patrick, embodied by my brother-in-law Eddie’s father, retired school teacher/actor, Eamon McLaughlin. This caused great hilarity on the day our wee Roisin married Eddie and our youngest daughter, Aoibheann, who was flower girl, turned and said quite matter-of-factly, did`nt know Auntie Roisin was marrying St Patrick’s son. The St Patrick’s Day parade was always great fun, where tractor after tractor pulled floats of Gaelscoil children, Centra Staff, Gaelic football teams, Sheila’s Irish Dancers (St Patrick’s wife) and all flanked by hundreds of people adorned in forty shades of green, kids with shamrocks painted on their faces and curly green wigs and local bands who played on the back of lorry trailers turned into makeshift stages. The merry drinkers spilled out onto the main streets drinking and partying like only the Irish do. This was a big day and a big deal.