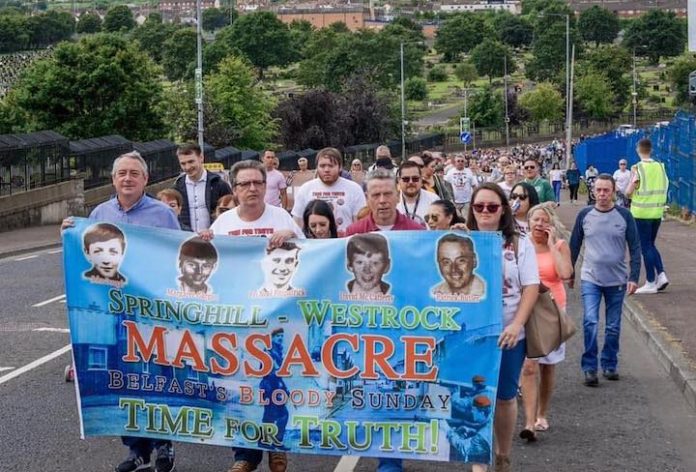 RECENTLY, the dirty tactics and dark secrets of Britain’s war in Ireland were revealed as the Ballymurphy families finally gained public acknowledgement that their loved ones—murdered by the Royal Parachute regiment in August 1971—were entirely innocent. Not content with killing unarmed mothers, fathers and clergymen, the British war machine launched a smear campaign against the victims and brandished them as terrorists in the media, whilst the government covered up the heinous crime for almost 50 years.

Inspired by the Ballymurphy verdict, the families of those murdered by the 1st Battalion Kings Regiment in the Springhill Massacre have demanded that their own inquest, which was promised back in 2014, now takes place.

Background
Situated less than half a mile from Ballymurphy, Springhill and the Westrock estate witnessed the cold-blooded executions of five civilians—including three children—in July 1972. Known as ‘The Forgotten Massacre’ because of the lack of media attention afforded to it, the Springhill-Westrock killings took place just days into a ceasefire between the IRA and British Army.

The truce had been in place to facilitate negotiations between the British Government and Irish Republican leadership. Some felt an IRA victory was imminent as Michael Carver—former Head of British Armed Forces—had reportedly suggested that Britain withdraw from Ireland and offer a 32-county plebiscite on re-unification. That scenario did not materialise; however, discussions were underway, and many people hoped that the talks would produce a satisfactory resolution to the conflict.

A refreshing sense of calm was personified by the balmy summer’s evening on July 9, 1972, until the peace ended without warning at 5pm. It was then that the first shots, resuming hostilities, were fired in Lenadoon. The nature of that incident is contested. The British Army claimed it was the IRA who broke the ceasefire, whilst Republicans claim it was the Army. Meanwhile, witness accounts suggest that British forces had been provoking residents in the area, which went against their promise to stay out of predominantly Nationalist estates during the negotiations. Regardless, at 9pm, the IRA Army Council announced that the British Army had broken the truce without warning and therefore, the IRA ceasefire was over.

Massacre
Within 50 minutes of the IRA resuming their armed campaign, Nationalist civilians in Springhill and Westrock were to pay a heavy price. Indeed, the soldiers were deployed in sandbagged sniper positions on top of the wall at a local timber yard. Suddenly, the sound of gunfire pierced the silence of the Belfast air.

The shooting had been directed at passengers in two cars. Harrowing sounds of screams echoed around the estate as a 19-year-old civilian named Martin Dudley was shot in the back of the head upon exiting one of the vehicles. The other passengers had no choice but to lay down as the snipers proceeded to aim their scopes and pull the trigger on anyone who dared to move. Minutes later, 16-year-old John Dougal was shot dead and his friend Brian Pettigrew was seriously injured by a second sniper as they went to Dudley’s assistance.

Having murdered two people and seriously wounded another, the British Army continued to scope those they were meant to protect and shoot them as if they were villains in some sort of perverse video game. Quite grotesquely, the next casualty was a 13-year-old girl named Margaret Gargan, who was brutally gunned down in a hail of bullets fired by a third marksman. Tragically, she had been returning home from a productive day helping at the local community centre. Her youthful innocence and kind heartedness was stolen from her, all because she came from a community that Frank Kitson—the strategist behind British low intensity military operations—saw fit to demonise and execute.

As the wounded lay helpless on the ground, Father Noel Fitzpatrick courageously went to administer the Last Rites to them. He would have been all too aware of the priest—Father Hugh Mullan—who was killed at Ballymurphy in identical circumstances 11 months earlier and no doubt the image of Bishop Edward Daly waving the white handkerchief on Bloody Sunday would also have been fresh in the memory. Nevertheless, he proceeded to serve the community he worked for beyond reproach. In doing so, he became the second priest to die in the conflict—a British Army sniper’s bullet passing through his body as the crown forces rained terror on the region. Devastatingly, the same bullet that fatally wounded Fr Fitzpatrick also killed a 38-year-old father of six, named Paddy Butler. It defies belief that, for attempting to pull the pair out of the line of fire, 15-year-old David McCafferty was shot dead too.

In total, the shooting lasted for 90 minutes. Dozens of families were trapped in their homes throughout. Witnesses described how residents were pinned to the floor, cowering away from the windows in each house, as the snipers let rip through every entrance and at any sign of life. Five civilians were murdered, two severely wounded and the whole community terrorised.

Within weeks of the Springhill killings, the British Government authorised a mass military occupation of similar Nationalist areas in Belfast and Derry, deploying over 20,000 troops, hundreds of armoured vehicles, tanks, and helicopters. In the Springhill and neighbouring districts, Operation Motorman brought hundreds more paratroopers onto the streets, recorded by one of their commanders as being determined to ‘pump lead into any living thing and watch the blood flow.’

No justice
Despite the language of terror and the appalling events outlined above, it was somewhat predictable that the killing of civilians in Springhill was never properly investigated, and most families were never officially informed that their loved ones had been wounded or killed. Their deaths were regarded as inconsequential by the state, and the Army immediately claimed that the dead were all gunmen/women. When those claims became so obviously inconceivable, the official account was revised to contend that all victims were accidentally caught in the crossfire of battles with actual gunmen/women.

Evidence of the victims’ innocence, multiple eyewitness accounts and the army’s decision to revise their version of events lead many to draw an obvious, albeit sickening, conclusion. Notwithstanding this information, the initial inquiry returned an open verdict. In truth, few were surprised at such an outcome, for between 1970 and 1973 the British Army killed 150 people, but the circumstances of those killings have rarely been satisfactorily explored, except in isolated cases (several decades later), such as the recent Bloody Sunday and Ballymurphy reports, which both concluded that the Army’s actions were unjustifiable and that the victims were entirely innocent, unarmed civilians.

Supporting the families’ case
New inquests into the Springhill-Westrock killings were directed by the Attorney General of the time, John Larkin, back in 2014. The case has been delayed ever since and the truth frustrated. To try and get the wheels moving again, the families relaunched their campaign for justice in 2019. Now, buoyed by the Ballymurphy 11 being exonerated after 50 long years, the Springhill families have once more called on the public to lend their support in seeking the promised new inquest.

The Irish diaspora can play an important part in supporting the families’ campaign by adding publicity to ‘The Forgotten Massacre’ and by calling on our politicians in Scotland to ensure that the former Attorney General’s commitment is met.

It is high time that the British public were made aware of the actions of the military against civilians located within in its own—contested—jurisdiction. Armed with this knowledge, people can help to ensure that similar events are prevented in the future.