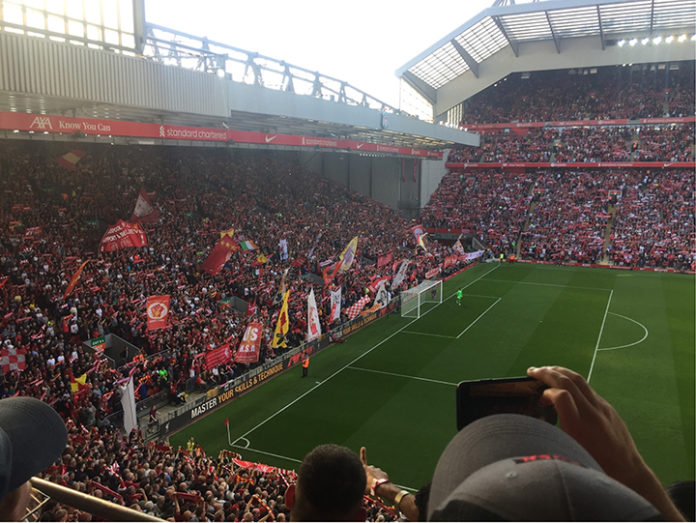 NOW that travel is slowly, but surely, returning with some degree of normality, it was hard to resist the opportunity
to hop on a plane and explore a city. Granted, Liverpool is merely a hop and a skip away compared to some of the more far-flung and remote parts of the world I’ve visited in the last five years, but even with that, it’s a city that’s good for the soul.

Although I’m better known for being a Celtic fan in many circles, I’ve never denied the fact that when it comes to English football, I’ve always been a Red deep down. With the restrictions easing on attendances at matches across the channel, the Liverpool vs Chelsea fixture at Anfield had to be taken in once the sights and the sounds of Merseyside had been done.

While it was my late father who passed on his enthusiasm for Liverpool FC to me, it was my mum who did likewise with her love of The Beatles. And although I’d been to the city numerous times before—mainly for trips to other matches—this was really the first time I ever took an extra day to wander the city streets and famous dock areas that make the place what it is.

As an Irish History graduate, there’s no denying that when it comes to our country’s history of migration, predominantly from the mid-19th century, the port of Liverpool is just as much a part of our heritage as anywhere else. While on a stroll around the district of Everton, I couldn’t help but notice that I passed a local Catholic church with a road sign for Roscommon Street.

Having nipped for a pint the night before—well, maybe a few more than that—I’d also got chatting to two local and fairly elderly Scousers who went by the surnames of Mahon and McDermott. A pair of easy going and light-hearted lads who informed me that they both had grannies who came from Dublin. This gave rise to the famous old gag: “What’s the true definition of a Scouser? He’s a Dubliner who could swim well!”

Perhaps one of the best features about the city is that everywhere is fairly walkable. Matthew Street was noticeably busy on Friday evening as the pubs and clubs filled up with stag parties, hens and ones looking to start the weekend off in style. This being the same street that’s home to the Cavern Club and the statue of a young John Lennon created an ideal photo opportunity.

The aforementioned docks— now known more commercially as Pier Head—is within walking distance. While it’s become much more touristy with its fancy cafés and souvenir shops since the city’s rejuvenation as ‘City of Culture’ in 2008, there still remains here a chance to take in the sea air and see for yourself the dockside that once made the city flourish in the old days.

As good as the sights are, it’s the sounds and energy that drives the city. Liverpudlians have their own distinct high-frequency accent, which is unlike anywhere else in the UK. Like the people, it’s welcoming, endearing and humorous, while a love of live music and football are prioritised over anything else.

Love them or hate them, there’s no denying that Liverpool’s ground at Anfield produces a special atmosphere. Having been away from stadiums for so long, and with all the uncertainty brought about by the pandemic, the pre-match rendition of You’ll Never Walk Alone was notably spine-tingling and even a tad emotional.

On a personal level, Covid-19 has carried a real and ongoing threat to my own career plans these past 19 months, but places and songs like these possess an uncanny ability to put things in perspective. They make you realise that you’re far from being the worst off person in the world, you become thankful for what you have and sure, as they say, money can’t buy me love.