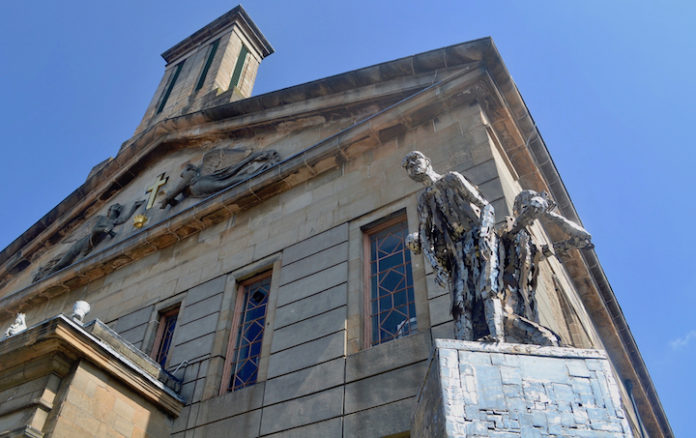 Speech, as delivered, by Consul General of Ireland in Edinburgh, Jane McCulloch at the unveiling of The Tower of Silence, July 25, 2021

A DHAOINE Uaisle, ladies and gentlemen, I would like to thank you all for your welcome today, and for the kind invitation from Coiste Cuimhneachain An Gorta Mór to join you for the unveiling of this poignant and profound artwork remembering the Irish Famine.

I particularly want to recognise the commitment and dedication to realising this event and the installation of the sculpture, of the committee, led by Jeanette Findlay, as well as the generosity of the wider Irish community in ensuring its funding.

To John McCarron, with the support of Maurice Harron, I wish to acknowledge the poignancy of your sensitive depiction of the human desolation wrought during, and after, those famine years in the 1840s—the suffering of those who died, those who fled, and those who were left without them.

Collective trauma
More than 170 years ago, the darkness of the famine in Ireland precipitated a collective trauma for the Irish people. For successive generations, it has cast a long shadow on the Irish across the world.

In 1840, following a century of growth, Ireland was home to 8 million people. In the space of a decade, 1 million would die of hunger and of related diseases. A further 2 million left Ireland, destitute, and with nothing but hope to carry with them.

Astounding as these numbers remain, despite our familiarity with them, they are not simply numbers. They are all harrowing individual tragedies.

The Irish Famine’s toll on human life was significant in its scale, and in its detail. Across the island, in rural and in urban areas, in each province, hunger and disease did not decide between age, gender or creed.

Whether from towns and cities, or rural Ireland, in considering the stories of our families, of our communities, and of our people, we acknowledge that victims of the famine were from every corner of Ireland.

Shared story
And it is our shared story, with all its pain and tragedy, that binds us together as a diverse community of 70 million people around the world today. We must acknowledge, that from the tragic depths of despair and devastation, some positive consequences emerged.

The famine has led to important legacies, two of which define us as a people and as a country.

Those who left Ireland as a result of the famine were the foundation stone of our diaspora. And our diaspora, here in Scotland—in Glasgow and right across the country—as well as throughout the world, is one of individuals too. In all our diversity, we share that collective memory, which binds us.

When we commemorate the famine, we do so inclusively, whether on an all island basis in Ireland, or internationally, considering the broad legacy of emigration, cultural loss and the decline of the Irish language, together with the specific issues of food security and the strong commitment of the Irish people to humanitarian aid and relief.

Memory informs empathy
Our memory of our great pain informs our empathy to our fellow human beings facing similar threats. As we stand here today, the threat of famine affects 34 million of our fellow global citizens.

It is the memory of the Great Hunger that has inspired generations of Irish women and men to dedicate their lives to improving the lives of others, as missionaries, volunteers, educators, health workers and in international development. Their legacy is part of Ireland’s global influence and reach—combatting poverty and hunger is one of Ireland’s flagship foreign policies.

Irish people see development cooperation as an investment in a better future, as an important projection of our values, and as a statement of solidarity with others who are less fortunate. Irish citizens, through strong support for our Official Development Assistance programme, have been instrumental in helping some of the poorest and most vulnerable people in the world to find new hope, and to build better lives for themselves and their families.

Through our bilateral partnerships, and our work through the EU, the United Nations and other multilateral organisations, Ireland can direct vital aid to people living in some of the most challenging and insecure environments on the planet. Our Overseas Development Assistance programme is widely regarded as one of the highest quality development programmes in the world.

Through remembrance and reflection, we can reach understanding, and not be bound by the past. And it is the collective understanding of a diaspora of 70 million people, though founded in tragedy, that enriches our shared present, ensuring that Ireland’s legacy of the Famine is one of care, compassion, kindness and solidarity.

I take my lead from President Michael D Higgins, who, at this year’s National Famine Commemoration ceremony, at Glasnevin Cemetery on May 16, reflected on healing. President Higgins quoted the words of Sinéad O’Connor’s song, Famine:

May all those who suffered in An Gorta Mór rest in peace.