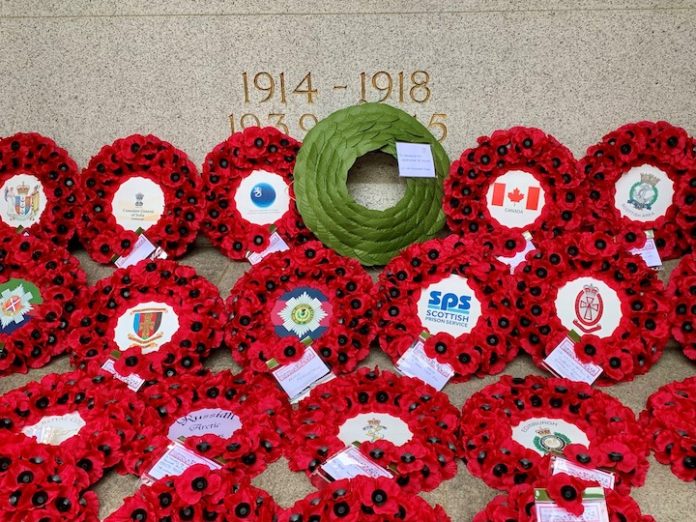 ON SUNDAY November 14, I was honoured to participate in the National Service of Remembrance at the Stone of Remembrance outside Edinburgh’s City Chambers—the first Consul General of Ireland in Edinburgh to do so.
Ireland’s Ambassador to the United Kingdom has participated in the Service of Remembrance at the Cenotaph in London since 2014, and my colleague, Ireland’s Consul General in Cardiff also takes part in the Welsh National Service. We lay laurel wreaths to remember those from the island of Ireland who lost their lives in the First World War. More than 200,000 Irishmen—and it was predominantly men, then—went to war, and it is estimated that 45,000 died.

The Scottish National Service, at which wreath laying was led by the Lord Provost of the City of Edinburgh, the First Minister, and the Secretary of State for Scotland, included representatives of the Consular Corps in Scotland, who I joined for the first time.

Following the National Service of Remembrance, I joined my consular colleagues at the service in St Giles’ Cathedral, which was led by Rev Calum MacLeod, Minister of St Giles’. The sermon was movingly preached by the Most Reverend Leo Cushley, Archbishop of St Andrews and Edinburgh, and the prayers were led by Lord Jim Wallace, Moderator of the Church of Scotland.

Archbishop Cushley’s sermon reflected on the appalling human costs of conflict, and the need to avoid war. He cited the COP26 climate conference, which had just ended in Glasgow, as an example of the many organisations, groups and individuals who strive for a better world for everyone. His sentiments were echoed in the prayers and
reflections of the service, and in remarks made later by both the Edinburgh’s Lord Provost, Frank Ross, and the national president of the Royal British Legion Scotland, Sir Alistair Irwin.

Reflections on COP26, and the critical efforts to reduce the harm that we as humans have caused to our planet, to secure our own future were both timely and thoughtful in the context of life lost to war. Ireland’s great nature poet, Francis Ledwidge, wrote many of his poems while in the trenches of the First World War, with his reflections and imagery providing stark contrast to the realities of the brutality he witnessed.

I come from the Boyne Valley, where I share the same, much undisturbed landscape that Francis Ledwidge wrote of so beautifully in his poetry. In his poem, Lament for Thomas MacDonagh, Francis Ledwidge, recovering from his war injuries at a hospital in Manchester, remembered his good friend, who was executed following the Easter Rising in 1916. A year later, Frances Ledwidge died in Flanders.

Lament for Thomas MacDonagh, by Francis Ledwidge
He shall not hear the bittern cry
In the wild sky, where he is lain.
Nor voices of the sweeter birds
Above the wailing of the rain.
Nor shall he know when loud March blows
Thro’ slanting snows her fanfare shrill,
Blowing to flame the golden cup
Of many an upset daffodil.
But when the dark cow leaves the moor,
And pastures poor with greedy weeds,
Perhaps he’ll hear her low at morn
Lifting her horn in pleasant meads.

Of his many reflections as part of the Decade of Centenaries, I have been deeply struck by the speech given by President Michael D Higgins at the Corymeela Community in County Antrim in June 2016, in which he expanded on the theme of ‘ethical remembering.’ The President spoke movingly of this process as being a rejection of amnesia, of an embrace of the experience of the ‘other,’ those previously left out of competing historical narratives, and of the subjection of those narratives to critical evaluation in a spirit of dialogue and openness.

On Remembrance Sunday, along with the human tragedy of lives lost, I reflected on President Higgins’ words that day at Corymeela: “Can we learn through commemoration to understand ourselves better—to engage critically with our own assumptions and prejudices.”

Greater understanding of our complex selves, as individuals and as peoples, is a humane aspiration.