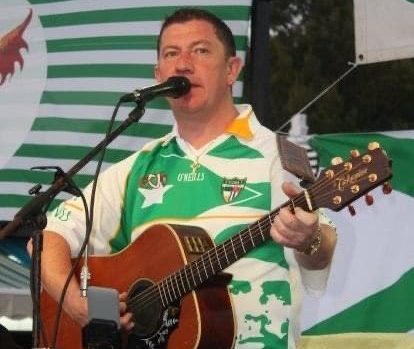 This month, Glasgow Irish Bands and Gigs catches up with Damien Quinn, a folk singer from Newry in County Down (above)—who has supported the likes of The Dubliners and The Wolfe Tones—about his 35-year musical journey.

Damien this year marks 35 years you’ve been on the music scene, Who or what inspired you to start playing?
As a kid from around eight years of age I was a member of the Wolfe Tone Accordion Band in Newry where I learned and played the accordion and took part in many parades every year. All my brothers and sisters were also in the band and my late father became its chairperson.

I was always a huge fan of The Wolfe Tones and the original Barleycorn band when I was growing up and also Christy Moore. At any Wolfe Tones concerts I would always be the first in the queue and would hang about outside the dressing rooms afterward to get photographs with the band. I was in awe of the band up on stage.

A large group of friends in our circle would bring guitars over the fields at the weekends, have a few beers around a campfire and sing to the wee hours of the mornings and many people in the town of Newry would comment ‘we heard you all singing last night.’

Following on from that, when you first started out you were part of a band Just Us, that went on to become Justice. What was the background to that?
Myself and my late brother, Dessie, were made redundant from the local meat factory and we decided to purchase music equipment and try our hands at performing on the local scene. We settled on the name Just Us from a band that we had seen while on our family holidays as kids in the seaside resort of Tramore in Waterford, which was about 180 miles away, so we knew that it wouldn’t be a problem sharing the same name.

We started playing locally—a mixture of Irish ballads and a few country songs to fill out the setlist. We were then given the opportunity to support the Wolfe Tones in the Newry Town Hall, which was a childhood dream.

We took another brother, Oliver, who had just been released from the H-Blocks and he played bass guitar. We then decided to just play rebel music and ballads as this was what we had grown up with and that’s what we wanted to be known for. Being Republicans all our lives made it so much easier and we were proud to continue in promoting our culture through songs and music.

We then decide to change the name to Justice, but it took a few years for it to stick as other venues continued to advertise Just Us. After playing as a three-piece band for a short while, we then took on board a fourth member, Gerry, on tenor banjo and mandolin, which made the band complete.

If you could turn the clock back is there anything you would change in your career so far?
I have no regrets, because it’s been a journey with great memories and travels, and I have made so many friends throughout the world.

My brother Dessie who started playing music with me tragically passed away suddenly in March 1993 after suffering a brain haemorrhage, he was a young man of 27 had only been on the road with the band for six years. It was such a shock and setback for us at the time and we didn’t perform for about four months after it happened. So there’s always the thought that if this hadn’t happened, maybe Justice still would be playing regularly today.

What’s the best advice you’ve been given?
My dad always said to me that I need to mix with the audience during the gigs and personally to go down and speak to people and welcome them. Something that I didnt do that often in the Justice days as i was quiet and shy then, but I do that now while on my gigs and it has stood by me now.

You’ve played in many great locations over the world—Liverpool, Glasgow, Santa Ponsa, Rome, Las Vegas to name a few. What has been your favourite location to play?
The European away games with Celtic are definitely the best gigs ever. I have played in Italy, Germany, Croatia, Romania, Denmark to name but a few. The best of these was in Rome in 2019. The Celtic fans were all looking for a trip to Rome as they had seen their team play quite often in the other cities in Europe, but Rome was the one that never really came up. The venue was Scholars Irish Bar—one of the biggest bars in the city—and the atmosphere was electric.

Another venue, which is up there with the best is the famous Barrowlands in Glasgow, where a few of us went on before the Wolfe Tones in front of 2000 people. Truly a night to remember.

With the band Justice we were honoured to share the stage with the mighty Dubliners and Paddy Reilly in Brittany in 1997 at a festival in front of 3000 people in a field. This was also amazing and great to see so many people clapping whenever you mentioned Bobby Sands’ name in the songs.

We believe there’s an Irish cruise coming up that you’ll be playing on. What’s the background to that and when do you set sail?
Yes I am delighted to be given the chance to sing for the first time on a cruise. We set sail from Fort Lauderdale in Florida in February for seven days on the Caribbean. Derek Warfield and The Young Wolfe Tones had contacted me to ask me if I would come on board to play my music as they were aware of the huge social media following that I have and said that it would it would be good to get some of my followers to come on board for the week. So I am delighted to be going on an Irish music themed cruise.

How do you feel the Internet has impacted the music business? Has it helped or hindered you during the lockdowns of the past few years ?
The Internet is definitely the way to go now to get your music out there, especially Spotify where you can find most bands throughout the world at the touch of a button. It also brings you a certain income in from people listening to your songs. It’s obviously not good for the CD buyers, but we have to move with the times.

The Internet got bands and listeners through the lockdown as musicians were able to play online gigs on Facebook, with a Paypal link onscreen allowing people able to tip the musicians as a token of appreciation. It also got your music out to people from all over the world and especially people who never seen you perform live before. I made lots of new fans through this and their support throughout the lockdown was amazing. It also brought a lot of new musicians onto the scene.

What is your favourite song to perform and why?
I probably have a few favourites. I love most of the slow ballads such as The Contender by Jimmy McCarthy from Cork about the famous Irish Boxer Jack Doyle and My Last Farewell, which I first heard via the Barleycorn which is based on the last letter written by Padraig Pearse to his mother before he was executed for taking part in the Easter Rising in Dublin in 1916. Then you have the likes of Joe McDonnell written by Brian Warfield about the 1981 hunger strikes when 10 brave men gave their lives so courageously for Irish freedom.

I love to sing my latest song that I composed—The Ballad of Pepe Rooney—which is about a volunteer and legend from Belfast. Many have commented that this is my best work yet in the songwriting and a lot of people have said that it’s up there with some of the best rebel ballads to date. Those are compliments that mean so much to me.

Which famous musicians do you admire?
I admire The Wolfe Tones for their strength of being able to continue on the music scene for what seems a lifetime. Credit to them and long may it continue. They have entertained us for many years and I have great memories of their concerts.

I admire the late Liam Reilly—the singer-songwriter from Dundalk in Louth—for his singing and songwriting and for leaving us with some of the finest ballads ever written like The Streets Of New York, Boston Rose, Flight Of Earls and Summer In Dublin. His band Bagatelle were my favourite band of all time.

I am also a great lover of The Fureys and I have seen them in concert a few times.

Christy Moore, the legendary folk singer, has always been one of my favourites. There’s not much you can say about this man that hasn’t already been said before.

The Dubliners are always a pleasure to listen to and their stories and wit have been brilliant.

I loved the story-telling of Liam Clancy and the way in which he can portray a ballad with his voice is unreal.

There are too many, I could go on all day and night.

What is one message you would give to your fans/followers?
Keep supporting all the bands and singers as the past few years have been a bit of a nightmare for us all and thank you for tuning in to all the live broadcasts on social media. I hope to see you all very soon at a venue near you.

What’s next for you in 2022?
I have overseas gigs booked again Scotland and England and hopefully restrictions are lifted again so I can get back singing in Europe for the Celtic away games.

I released two CDs during lockdown last year, which is unusual for me as I normally leave two years or so between each one, but it gave me something to do as there were very limited gigs. So, I can’t see another one being released in 2022 but never say never and with things changing with song releases with Spotify and so on, it is now possible to upload songs rather than full albums, which is good. There are a few older ballads that I would like to record for Spotify, so hopefully I will get them done in the studio and uploaded.

In the music business, some big gigs can come in at short notice so you never know what’s around the corner. So I’ll just take it as it comes.