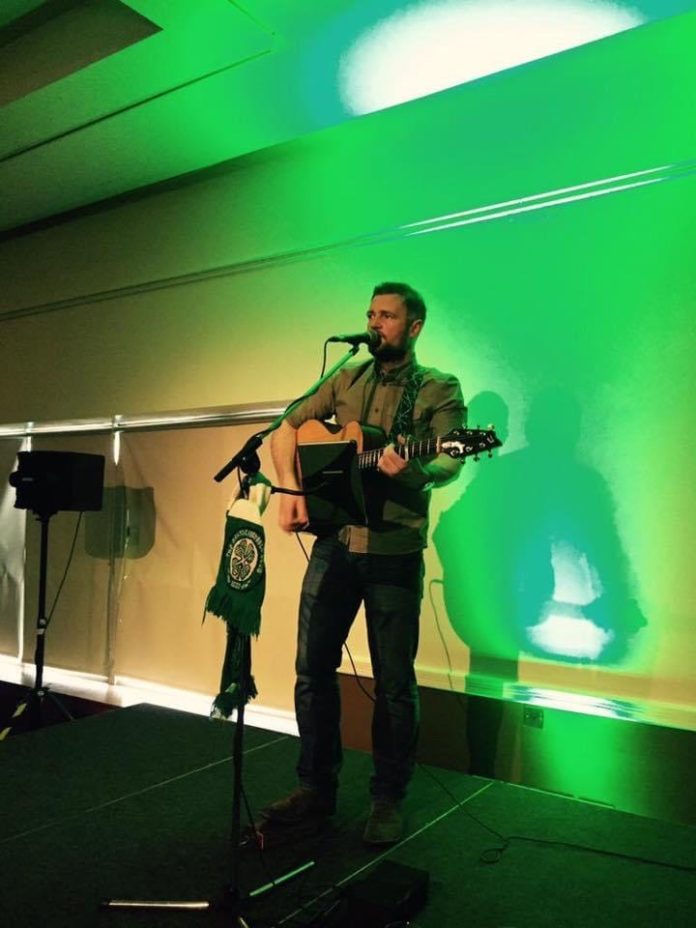 GLASGOW Irish Bands and gigs are staying closer to home this month. We caught up with the talented musician Liam McGrandles, a singer, songwriter and guitarist from Denny in Stirlingshire. With almost 20 years of experience, Liam is well-known in the bars, hotels and the clubs in Glasgow and has become a fans favourite at Celtic park pre and post-match.

Who or what inspired you to make music?
My parents first and foremost. My dad always had records playing when I was growing up. Everything from the great Irish singers like Paddy Reilly through to the Country greats like Kris Kristofferson. He had a really good singing voice as well. My mum played piano and accordion so there was always music in the house.

How would you describe the music that you typically create and perform?
I would describe it broadly as folk. The songs I cover are mainly classic Irish ballads, the songs I write are about growing up in working class Scotland.

You performed a few years back with Rod Stewart in New York, how did that come about and how did it feel to perform with him?
Yeah I first met Rod at Celtic Park. He had his two sons with him and they wanted to come in to the Kerrydale Bar to hear the music—the supporters lounge that I play inside the stadium. He got swamped by fans so he had to leave, but he asked if I could go through to his lounge and meet the boys and do a few songs, so I did. It was a surreal moment for me, firstly meeting someone you had grown up hearing on the radio, then to sit down and start singing with him. It was an unreal experience, We sang Grace together and a video of it done the rounds on the Internet. I gave him a couple of my albums and a few weeks later I got an e-mail from him, so we have kept in touch ever since. We done the Celtic Foundation Gala Dinner together in New York and have remained pals.

If you could pick anyone—outwith Rod —who would you most like to collaborate with and why?
Bruce Springsteen. The man is my hero and the kind of songs he writes are about real life. He is a natural storyteller and that’s what I love about his music.

If you could turn the clock back is there anything you would change in your career so far?
I wouldn’t change much to be honest. I’m just happy and grateful to be out making a living doing something I enjoy. I would maybe say, I could have concentrated more on ‘writing’ songs when I was younger. I never really had the
confidence to put my own stuff out there.

What’s the best advice you’ve been given and would pass on to other aspiring musicians?
For every bad gig you play, there’s a good one just around the corner. So as always keep your head up.

How do you feel the Internet has impacted the music business, and has it helped or hindered over the recent lockdowns?
The Internet has had a massive effect on the music business. It’s almost unrecognisable from when I grew up, buying CDs and cassettes in the 1990s. To make money now, an artist has to be performing live on a regular basis. The Internet has given musicians the advantage of being able to promote themselves online, through videos, updates and so on and even allowing them to sell and distribute albums and merchandise without the need of a shop or middle man. It has its advantages and disadvantages, it’s all about trying to utilise it as best you can.

What is your favourite song to perform?
That’s a tough question. It changes week to week. I really like performing Beeswing just now. Also The Galway Shawl, Boolavogue. I love singing the old ballads.

What is your proudest accomplishment to date as a musician?
I’m just proud to be out there doing it and somehow making a living out of it. It’s a tough game at times, but it is definitely worthwhile.

These are a mix of Celtic songs, working class ballads and stories about growing up and getting yourself in to trouble. A good mix and something in there for everyone.

You are often the resident singer in The Kerrydale Bar in Celtic Park pre and post-match. How does playing at Celtic Park feel and is it different post Covid-19?
Playing at Celtic Park is definitely my favourite gig. The atmosphere in the Kerrydale Bar is incredible and it has allowed me to meet and become friends with so many great people from so many different places and all walks of life. It is a sacred place to me and I’m humbled to be able to sing there every week. Post Covid-19, not much has changed for me. The atmosphere has returned with a bang and people have missed live music. It’s great to be back there.

What would you say is your greatest strength as an artist?
I would say resilience. It can sometimes be a soul destroying business. To keep going and keep plugging away is the only thing for it. It can be the most rewarding job in the world aswell.

What’s would you say is your greatest weakness as an artist?
I would say trying to please all of the people, all of the time. I sometimes take on too much as I don’t like saying no to folk. Doing too many gigs can really wreak havoc with the voice and it can definitely affect performance.

What interests do you have outside music?
Football. My two main interests my whole life have been music and football. I played football for many years as a youngster and well into my 20s, although I couldn’t run the length of myself now.

What are your favourite musical genres?
I love so many styles of music. Obviously Folk is up there, but I also love Soul, Country, Rock. I
listen to a bit of everything.

What’s next for you?
I’m off to New York in March with The Celtic Foundation for a couple of gigs so I am really looking forward to that. My aim is to get a new album of original songs recorded this year as well. And obviously I hope to keep plugging away with my regular weekly gigs in Glasgow, Stirling, Falkirk and so on, keeping the wolves from the door! Onwards and upwards.