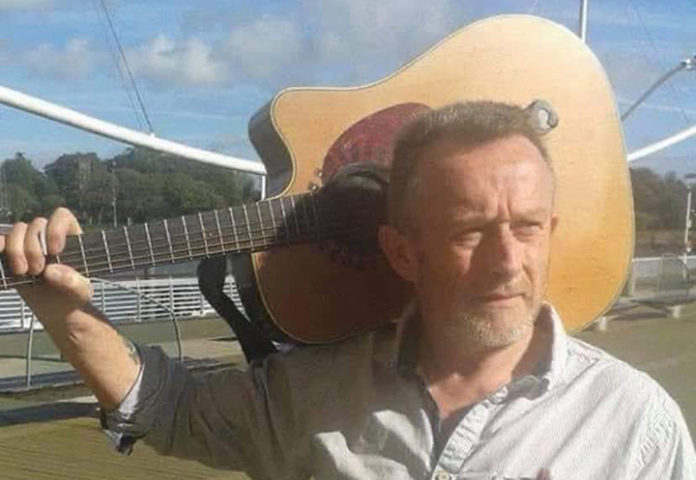 THIS month, Glasgow Irish Bands and Gigs nip across the water to Waterford, Ireland to catch up with Liam McMurragh (above)—McMurragh to his friends!

I held onto that thought right throughout my school years and at 19 years of age, when I was working as a labourer on a building site, going about my work I was singing my heart out and I was approached by a scaffolder named Martin Tubridy from Clare, who asked if I would be interested in coming to a music session that night in a nearby pub called Mick Cullens. I immediately said that I don’t play an instrument, but I have a guitar, to which he said: “You sure can sing though!” So, on that night, in 1977, my journey in music began. So here I am, almost 44 years later, and I’m still singing, even better now than ever!

As well as covering many amazing Irish ballads, you are a producer, songwriter, multi-instrumentalist and vocalist. Can you tell us more about the song-writing process? Do you usually start with a melody and let the lyrics come to you? Or is it the other way around?
My song-writing skills have resulted in some nice songs being completed, but my strategy varies from one song to another. For example, the very first song that I was involved in writing was a song called 19 Arches, which was written in 1980. The original draft of this classic song is about my hometown of Arklow in Wicklow and the bridge that spans the Avoca River, which is called the 19 Arches. It was written by a lifelong friend of mine, Toddy Kennedy, who is a poet, not a musician and the music for it was written by a colleague of mine John Nolan. This song existed for months without a chorus, so one winter’s night at a practice session I really got ticked off and I pulled out a cigarette packet and wrote the chorus in 10 seconds flat and I’m still singing it today. It’s also still very popular in my live shows.

A very recent song I wrote called The Crashing Waves came into existence due to me suffering very badly with depression on September 22, 2020. I put a short post up on Facebook very early in the morning saying: “I can’t take much more of this, I’m going walkabout, I will be back, but I don’t know when.” A friend of mine in Wexford said: “Take your guitar down to the beach Liam and the crashing waves will sing to you.” I jumped off the couch immediately and wrote this song in its entirety in 10 minutes. I recorded it on my Dignified album shortly after and the title track of that album is also mine. To my great pride and joy, my friend Gerry Glackin from The Irish Brigade has told me recently that they are going to record The Crashing Waves on their upcoming album. Gerry has been my idol since I first saw his band in the Wexford Inn in Dublin in 1984.

Can you remember the first time that you wrote a song? Describe it to us?
Haha! I think I just covered the answer to the previous question.

Who would be your ideal musician to collaborate with and why?
I have only collaborated once in my life so far and that was in 1980 for 19 Arches, but having said that I sent Gerry a half-written song called The Immigrant, which he has promised to complete, so that one will be the pride of my long career in music.

Are there any musicians who inspire you? What qualities do you admire about them?
This is a question that I find kind of hard to answer because I have always trusted in myself and my own ability as a singer, but my influences would be The Irish Brigade, The Wolfetones, Christy Moore and many others of that same genre. I would also listen a lot to the glam rock of the 1970s such as Queen, Abba, Slade and lots more from that era.

You have played at some amazing venues over the years, what has been the most memorable and why?
My most memorable show came in 1996 while living and playing music in Germany. I was the only solo Irish singer on a music festival in Darmstadt. I walked onto a huge stage—just me and my guitar—and proceeded to drive 3000 people nuts with Irish ballads, American Country and 1960s classics. This was the most memorable 90 minutes of my life.

However, on a slightly different note, I also have the distinction of performing in Abuja and Lagos in Nigeria as guest of the Irish Ambassador there in 2004 and 2005 for St Patrick’s holidays and celebrations and there are so many others it would take a book to get to them all!

What is your favourite song to perform?
Meet me at the pillar by Jim McCann, Farewell to Bellaghy by Gerry Glackin, A Father’s Blessing by Gerry Glackin, Joe McDonnell by Brian Warfield. Of those I’ve written probably The Crashing Waves, Will you wake me with a kiss? Will Santa still be coming here this year?

What’s the best piece of advice another musician ever gave you? And what advice would you give a musician starting out?
Same answer to both questions here—don’t give up, have faith and belief in yourself.

Do you follow a process or ritual before a performance to get rid of nerves or performance anxiety?
One pint of Guinness, not for nerves or anxiety, but to coat the vocal chords. I don’t get nervous or stage fright, I just look at my audience before I go on and say to myself, ‘let’s give these people a great show,’ then I’m on.

How have you been able to use social media during these unprecedented times? Are you finding that you use it even more to stay connected to fans and other musicians?
I started doing several free shows live on Facebook, which helped myself and a lot of other people all over the world cope and stay sane.

If you could change anything about the music industry, what would it be?
The total disrespect from pubs who have TVs on showing sports while a musician or band is performing. My personal feeling on this is that it’s totally demeaning to the artists and should be banned.

If you could turn back the clock is there anything you would alter?
Plenty, but of the publishable variety, I wish I’d learned piano as a child or ever.

What are your plans for the coming months?
That’s a very difficult question as my personal life recently prevented me from being in Scotland and also the USA, but alas it was not to be as my children come before anything or anyone.