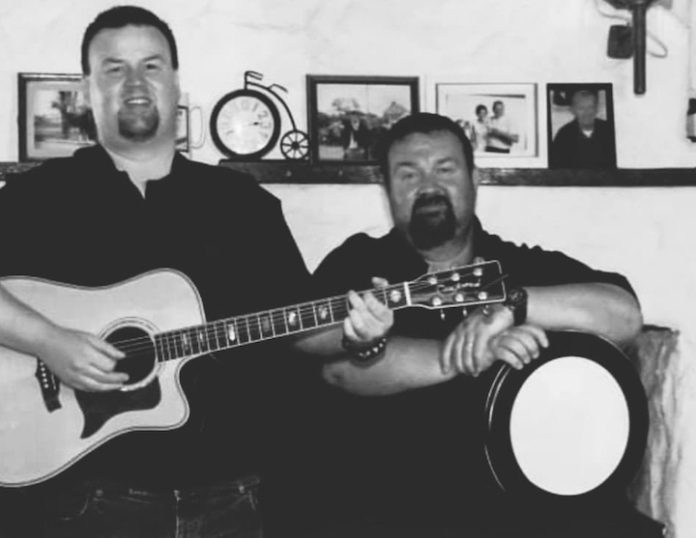 THIS month, we speak to the Dooley Brothers Band, who started playing music in 2015 in a little village nestled at the bottom of the Slieve Bloom mountains called Borris-in-Ossory, County Laois, in the heart of Ireland. The Dooley Brothers are a two-piece band comprising brothers Noel and Derek Dooley (above).

Who was your inspiration for getting into the music business?
It really started when we were young at home in our parents’ house, so our parents in early days along with our own wives and children up to today would be the main influences and reason we are involved. The music we love to play is mostly Irish folk and traditional, for example The Dubliners, The Wolfe Tones, the Fureys and so on. That is what we grew up listening to and still listen to today.

How would you describe the music that you typically create and perform?
The music we perform is usually anything from The Cranberries to The Wolfe Tones, but folk music is the basis for a lot of what we do.

You play a wide range of songs and ballads. What is your favourite song to perform and why?
Only one answer here, Grace is our favourite song, simply because it tells the story of Grace Gifford who lost her love Joseph Mary Plunkett to Crown Forces during events in Kilmainham Jail after the Easter Rising. It depicts the true spirit of the Irish people in our opinion.

What have been your favourite venues to perform at and why?
There are a few venues at home and abroad. Our own village has been good to us with a few unbelievable nights in both Kelly’s pub and Rosie O’Grady’s. Turley’s in Mountmellick is on a par with these bars too. In the US, we played in the Four Green Fields in Tampa Bay and the Ri, Ra in Washington DC, but our standout gig was McGinley’s Golden Ace Inn in Indianapolis on St Patrick’s Day, where some 5000 people passed through its doors while we were playing. That is up there with the best of the gigs we have played.

What’s the best gig you have performed?
The best live gig was a local gig, believe it or not. Our local hurling club Borris/Kilcotton won the Laois County Hurling Final and when you’re playing music to your own people in a tent or on stage, it’s a special moment. The pure joy and emotion, after having waited over 40 years to win and celebrate, makes it the best gig we have ever played.

The music scene has altered a lot ever since you started performing. What’s the key to making it work?
Indeed, it has changed a lot since we started out, but we’re a fairly laid-back couple of guys and what seems to work for us is actually being able to read a crowd listening to us—be that being on video during the ongoing pandemic or singing live. Either way, it would be far harder if it weren’t for the fantastic people that tune in or come to see us live, that’s what makes it work for us.

Who would you most like to collaborate with?
Thankfully we have collaborated with some of Ireland’s best musicians in our journey and a lot of management people including Murray Leith in Glasgow, but we’re happy enough to just do what we do for the people who listen to us.

What’s the craziest thing that’s happened during a performance?
Our concerts—big or small—are usually good nights, but the craziest thing we’ve witnessed was a crowd singing the aforementioned Grace louder than we were actually singing it. It was a spine-tingling moment.

If you could turn the clock back is there anything you would change for the band?
Yes. We would have liked to learn more instruments when we were was younger. Other than that, not really. I think we’re both delighted to be able to play music with each other.

With the hope that someday soon restrictions will ease and lockdowns will end, what’s next for you?
Look, lockdown has been difficult for everyone—young and old. As an Irish folk band, our next mission is to try and get back to some kind of normality, to play gigs under new management and old management alike, to keep safety in mind and to continue to do what we do best, play Irish folk music to amazing people abroad and at home.

Thank you to The Irish Voice for the interview, from Noel and Derek Dooley.