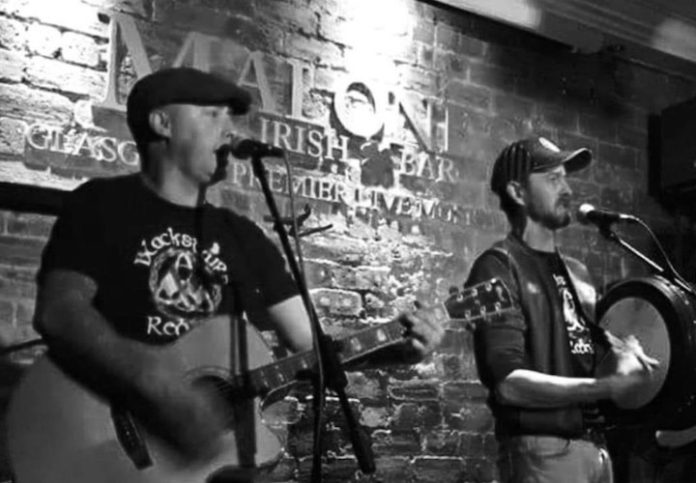 THIS month, Glasgow Irish Bands and Gigs heads across the Irish Sea to Wexford to catch up with Kevin and Ollie from Blackstairs Rebel (above). We’ve had the pleasure of knowing them for some time now and seen them perform and they never fail to entertain.

First off thank you for taking the time to answer our questions. So Blackstairs Rebel, where did the band name originate?
The band is made of Wexford and Carlow people. Kevin is from Wexford. Ollie was born a Wexford man and lived in Killanne originally—home of the famous Wexford and Rathnure hurling legend Nicky Rackard and the song Kelly The Boy From Killanne. He now lives just over the border in Carlow. The mountain range between us is called the Blackstairs Mountains and we play a lot of Rebel songs. Ollie stuck the two together and it gave a representation of where we are from and what we do—Blackstairs Rebel.

How did you all meet and decide to go on the road ?
Myself and Ollie always moved in the same circles, because we grew up in the same parish. We started the band in 1997 after a sing song on a bus back from Croke Park with PJ White also on board. Carol joined around 2003/4. Myself and PJ had been in a rock covers band previously. When we heard Ollie singing that day we knew what was next for us. Ollie was a block layer at the time—the singing brickie they called him on the building sites!

Since the formation of the band, you have progressed and played in a number of countries, cities and towns. What has been the most memorable location(s)?
We have had great times everywhere we have played. There’s not many memories from the early days, because once the gig was over we headed to someone’s party and drank it out until the next day, but that was different times. We couldn’t get away with that now haha! Malones on our first trip to Glasgow was epic. I think Ireland were playing a qualifier that night and the roar and singing from the crowd was deafening. Chicago, London, Manchester, Liverpool and Coventry, and all our gigs in Ireland all have something special and something different every night.

What’s the craziest thing that’s happened on tour?
The car died! We were performing our last gig in London one Easter Monday. We had played in Glasgow and Manchester and London. Every light on the dashboard came on during that tour. When we got to London the car conked out at the hotel on the Sunday. We made arrangements to get the gear to Kilburn, thanks to Jamie Connors’ Saoirse Irish band. We played our gig and it was a great night. On the Monday, the car started again, so we drove to Kilburn for the afternoon gig. We were joking with the crowd about the hardship we were having with the car. When the gig was over everyone came out to see us off. I turned the key, the car started and there was a big cheer from the crowd. I put the car in gear let up the clutch and she conked out for the last time. The crowd started singing: “You’re not goin’ nowhere!” And they were right as the car was done. So we went back in the bar had a few pints and stayed in London for the week on the beer—sure what else could you do? The car was eventually crushed. Crazy times, but we enjoyed every minute.

How would you describe the music you usually create and perform?
Irish folk, rebel, ballads and slightly punk at times. We never stick to the setlist, anything could be thrown in at last minute, depending on the crowd and that’s what it’s all about, the people that come to the gigs. If they go home happy so do we.

Are there any musicians who individually inspire you and what qualities do you admire about them?
Yeah anything with life in it—Dubliners, Wolfe Tones, The Pogues, Flogging Molly, Guns ‘N’ Roses, The Sex Pistols, slipknot—we are inspired by all music, not as much individuals, and when we go on tour anything from 1980s to heavy metal to Irish keeps us entertained. My personal favourite while driving is London’s finest The BibleCode Sundays.

If you could go open a show for any artist or band who would it be?
Flogging Molly anywhere on a St Patrick’s Day gig!

What’s you favourite song to perform and why?
The Celtic Symphony, purely for crowd involvement. You just know when the chorus kicks in ‘here we go again,’ the arms are in the air and everyone is on the floor singing. Brian Warfield and the Wolfe Tones are legends.

What is your proudest accomplishment as a musician to date?
Getting on the stage every night. Having been on the road for 25 years next year and still loving every minute of it.

If you could change anything about the music industry what would it be and why?
Radio play for Irish bands. Irish mainstream radio gives no air play to our music, they play the same five songs every hour on the hour. Local radio shows do support Irish folk ballads and rebel music a bit more. 2020 was a hard year for everyone, but you managed to get together and get things done.

How did you find getting music out during the lockdown?
Lockdown was very tough. There were times when we just felt like calling it a day. Ollie’s father, Jack Jordan, died during lockdown after a hard battle with cancer. There was a lot going on. Travel restrictions meant we couldn’t meet up in the same room and, eventually, Carol decided to step away and have a look at other things in life, but she is still working away in the background helping us out. We did limited Facebook Live gigs on our page and Glasgow Irish Bands and Gigs, which kept us going. Eventually, myself and Ollie got back into it and are having a great time on the road again.

What about things like YouTube? When you see your stuff on there is that good or bad? Does it help or hinder you?
YouTube is useful. It’s great to have somewhere to stick up some tunes, but it’s hard to get people on board. We are fairly raw. We have videos recorded where we practice. It’s nothing fancy, but it gives people an idea of what we do. The best way to see the band is come to a gig, sing along and come up and have a chat. That’s what we love.

Following on from that question, how do you feel the Internet has impacted the music business?
It has its ups and downs. Playing Facebook Live is tough, as we like to be able to see the whites of the eyes, the smiles on people’s faces and hear them sing. But certainly Facebook Live was a blessing during the lockdowns for everyone to stay in touch and keep sane. Glasgow Irish Bands and Gigs were at the forefront of this and deserve an award for getting the music out to people all over the world and keeping their spirits up in such tough times.

What’s next for the Blackstairs Rebel?
Gigs, tours, kebabs, pints, heading to a few Celtic games, winning the lotto and more of the same. Keep her lit!