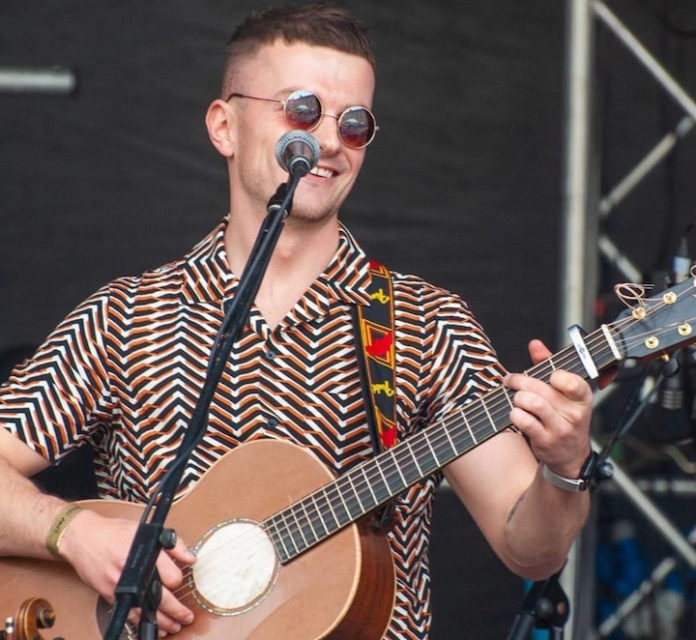 SEAN Magee (above) has graced us all lockdown with his high-octane gigs featuring everything from Irish music to country to reggae to rock and even rap is there nothing Sean won’t take on. This month we get more of an insight into the man himself and what drives him.

At what age did you know music was the line of work you wanted to pursue?
I began playing music at age 7 when I started lessons with a legend of Irish traditional music and also Irish rock, Pat McManus (Mamas Boys). I then started gigging along with my dad every weekend from age 9 and that is when I knew that it was what I wanted to do. Don’t get me wrong, probably like every child at that age of 14 years old growing up and it’s not seen as cool to play the fiddle anymore, but the fact that I had gigs at the weekends really pushed me on and I’m so glad now that I kept playing.

You play a range of instruments all very well. What is your favourite one to play?
Yes, so I play fiddle, guitar, whistles and banjo mainly, but my favourite will always be fiddle. I’m most comfortable playing it.

Have you been musically trained or are you self-taught?
I began lessons at aged 7 until I was 15 years old for fiddle. My dad showed me some chords on the guitar to get me started, but I’m mainly self-taught on the guitar and then I learnt the whistles in primary school. Banjo is the same as the fiddle notes, so I just picked that up myself.

Your whole family is very musical. Can you tell us a bit about them?
Yes, my whole family plays music. Dad plays guitar and sings, my brother Jamie is a brilliant button accordion player and Eli Rose my sister is an amazing singer, so just getting to perform along with my family every so often is amazing and even just playing music in the house together is a great thing to be able to do.

Who are your musical inspirations and why?
There are many inspirations I suppose. I would say my dad and Pat McManus (fiddle teacher) inspired my playing and kept me right on my journey. There’s also Rory Gallagher from Rory and the Island, who I joined on tour in 2019 for a year. That really opened my eyes on how to self-manage.

What’s the biggest achievement in your musical career so far?
I would have to say winning the All Ireland Fleadh on fiddle when I was 14 was my biggest achievement. It’s a massive competition here in Ireland and having to make my way through my County Fleadh, Province Fleadh (Ulster) and then to be up against other competitors from all around the world in the All Ireland Fleadh was amazing and to win it was just something else.

Another big achievement I am proud of is setting up my own tours at the beginning of 2020—before the Covid-19 pandemic—where I was in Germany, Amsterdam and then finished off in New York City for a week of gigging before it was sadly cut short due to lockdown.

What’s the best advice you’ve been given in your career so far?
I remember Rory Gallagher telling me when I was 24 years old to get my original songs out and really start to push my music career as I would be 27 before you know it and things get harder to push the more time goes on. And sure enough, I’m 27 at the end of the year and it flew past. So, I’ve had three original tracks out and two Lockdown Live CDs released since Rory said that.

What is the best venue you’ve played so far and what has been the best crowd?
We had a week’s residency in Mandalay Bay Hotel in Las Vegas, which was mental! They were long gigs, but really good craic. The best and loudest crowd I have ever experienced was definitely playing in The Garage in Glasgow, which was one of the first shows I played with Rory and the Island.  When we walked out it actually hurt our ears with the sound of whistles and the crowd went crazy! I can’t wait for Covid-19 to disappear so we can get back to that haha!

If you could play on stage with anyone who would it be?
Oh God, anyone from Ed Sheeran to Luke Combs.

What challenges have you faced musically during lockdown and how have you adapted to the whole situation?
At the beginning of lockdown, I obviously didn’t think it would last so long, so I just took things easy for two weeks or so as I had just got back from being on tour in USA. However, when I realised things could be like this for a long time, I started doing Facebook live shows, which really took off for me. There were audiences of 1000 people joining at one time weekly and on catch that went up to 100,000 during the week, so I kept them going every Friday night. To be honest, if it hadn’t been for the Covid-19 pandemic, I wouldn’t have had the chance to do these lives shows and build the audience and following that I have. So that’s me looking on the bright side of the situation.

We’ve all loved your online gigs. Are there any one of them that you class as your favourite and how have you found them?
The live shows were great. They were an excuse for my whole family to get involved and to even just to get dressed up on a Friday night in lockdown, have a few drinks and listen to me play some music. However, I would have to say the best live video I did was the Touring Tavern one. I was contacted to see I I would launch the ‘Touring Tavern’—an old caravan that was kitted out as a bar in inside. When I watched the live show back the next day the camera was shaking the whole way through it with everyone dancing in this caravan. It was like the scene from Father Ted where they all Irish danced in this tiny caravan!

Do you feel the music scene is going to change after lockdown and if so do you have plans in place to deal with that scenario?
To be honest I don’t really know what to expect! Obviously, I know numbers will be smaller for a while, but hopefully we can work our way back up to full capacity and just roll with things. We will get there eventually and just keep playing and doing what we love to do.

What are your plans for the future albums, tours and so on?
In terms of albums, I have four original songs recorded as part of the Lockdown Live albums, with a mix of cover songs and some Irish traditional tracks thrown in for good measure. I want to build up my original tracks to eight songs that I’m happy with and get into a proper studio and get them recorded professionally. As for touring, I’m hoping to start my tours at the end of 2021 in New York City. I’m hoping I will be able to fly by then, but that’s the plans so far.

Finally, just for fun, we’ve had the pleasure of seeing all your pets on your live gigs from dogs to sheep. If you could have any pet what would it be?
Oh God, no more pets! My mum is a dog minder as well so there could be 10 dogs in the house in any given day. That said, I wouldn’t mind a wee micro pig if I had to get another pet.