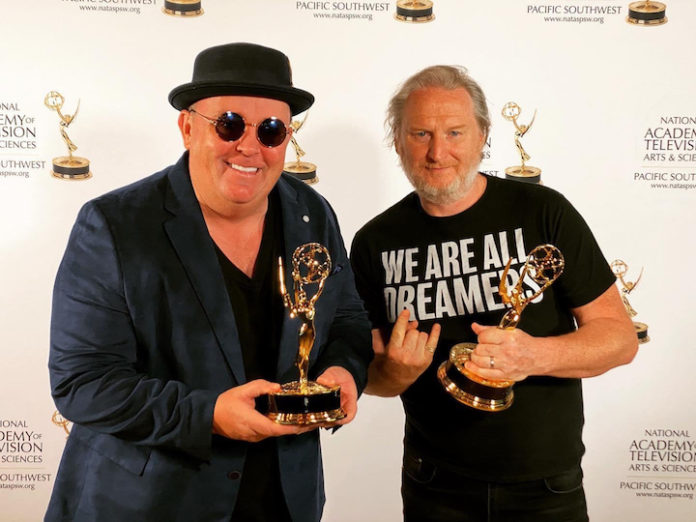 THIS month, Glasgow Irish Bands and Gigs head to (Viva) Las Vegas to chat with Dublin founded band The Black Donnellys, Dave Rooney and Dave Browne (above). The guys took time out of their busy schedule to speak to us.

The Black Donnellys formed in 2004. Who or what inspired you to get into music and what brought you to forming together?
(DR) Music has always been a big thing in my house with my mother and father being huge music fans, so I was exposed to it at a very early age. They always had the latest artists new single or album, artists such as Don McClean, Neil Diamond, Cliff Richard, Billy Joel, Cock Robin, Chicago, the Pointer Sisters, Detroit Spinners—truly an eclectic mix across different genres.

(DB) My brother—who is older than me—would bring home records every week and I became hooked on the noise of a guitar, especially Gary Moore, Thin Lizzy, Richie Blackmore, Santana, Jimi Hendrix and Stevie Ray Vaughan. They just totally inspired me to mix it all in with the Celtic sound—Gary Moore and Horslips were brilliant at this.

(DR) I was playing a few venues in Lanzarote in the Canary Islands for a few years, and I met Dave Browne a couple of times when he was on holiday. We got chatting and it transpired we had a lot of mutual acquaintances. I was moving back to Dublin; Dave was looking after a young traditional singer—George Murphy—and asked me if I’d like to join the band and write some songs. So, I became their bass player/singer for the 4/7 piece outfit. The first gig was supporting Ska giants Madness at the Point Depot in Dublin, with me and Dave ultimately moving on as a two-piece from the band and pursuing a few solo and collaboration projects.

How did you end up playing in Las Vegas?
(DR) Dave Browne was invited to go to Las Vegas when the owners saw him perform at his World Record attempt for marathon guitar playing in 2011. He initially went over with a female singer called Clare Peelo and then called me up to ask if I’d be into a gig over there, I duly accepted. After about three years of doing sporadic two-week stints, we propositioned Rí Rá about being their house band, the rest is history.

Are there any musicians who individually inspire you? What qualities do you admire about them?
(DR) I’m a huge Beatles fan, purely for their catchy melodies and incredible songwriting. Jeff Lynn would be another, but I like lots of different artists and genres, like Thin Lizzy, Crowded House, Bagatelle, Gaga, the list is vast. Great melodies, lyrics and incredible performers.

(DB) I’m a major Thin Lizzy fan and a major Beatles fan, but I’m totally in love with guitar, so people like Ritchie Blackmore, Stevie Ray Vaughan, Brian Setze, Joe Walsh and I’m listening to some of the older guys now such as Roy Clark, Les Paul, Glen Campbell and Jerry Reed. They really make you want to keep practising!

Since you formed you have played throughout Europe and the US. What are some of your most memorable gigs?
(DR) Some of my most memorable gigs were in Ireland. Opening for The Fureys at the Cork Opera house was brilliant. There were 1000 people sitting in absolute silence and the sound was epic. After each song the place would erupt into applause, which gave me goosebumps. That place has something special. A close second would opening for Madness at the Point in Dublin. Playing in front of 15,000 people was incredible. Headlining the Paddyfest Festival, in Lake Havasu, Arizona with our festival band complete with our brass section was fantastic too. It was a killer night.

Dave Browne, you’re a Guinness World Record holder. How did that come about?
The World Record had always been in my mind since I heard from a friend of mine years and years ago. Then, when I decided to do it, it was because the recession had hit in Ireland nobody was gigging and nobody was recording. I had a recording studio in Ashtown at the time and gigs were low, so I needed something to build up the publicity. I went to Temple Bar talked to them and put a plan to the management and they got behind it. Some brilliant musicians from Temple Bar and some well-known players jumped in and it was an amazing start to this roller coaster of World Records, moving to Las Vegas, documentary making and gigging all over the world. So, it was a basically to raise some publicity because there weren’t many good gigs around. That’s why I did it and it worked thank Jaysis!

Additionally, you teamed up with other artists at Rí Rá to break the Guinness World Record for Longest Concert by Multiple Artists and successful achieved this. Given this has now been superseded do you think you’ll look to break it again?
I don’t think we’d look to break that World Record again. It’s kinda like been there, done that, there’s other fish to fry. That said, there is a record we’re eyeing up in the coming years, playing in 50 European countries, but that’s on the back burner for now.

In 2016, you wrote the hit song Notorious inspired by UFC fighter Conor McGregor. Was this commissioned or just organic?
Notorious wasn’t initially commissioned, it was inspired by the meteoric rise of McGregor and the sea of green that used to descend on Las Vegas every time he fought. The fans were incredible and the atmosphere was great, which inspired me to write the song. We met UFC global marketing manager Garry Cook, who we befriended, got chatting to and had him watch a music video we made and he ultimately commissioned the song to be added to the advertising and build up to the McGregor vs Diaz return fight UFC 202, after a meeting over a game of golf.

What is your favourite song to perform?
Favourite tunes to perform change from time to time. At the moment I’m liking our version of Beeswing and the Annie Moore song, Isle of Hope and Tears. One of the latest originals, Echoes, would be my favourite right now along with our versions of Toss the Feathers and an original instrumental Davey’s Reel, which is a tribute to Jerry Reed, Roy Clark and Glen Campbell.

If you could change anything about the music industry, what would it be?
Treat the artists like the artists they are, not the self-proclaimed rock stars that claim celebrity by playing the artist’s music and turn up at the opening of a tin of beans. Protect artists’ rights, royalties and all streams and performances. Pay them!

You released the film An Irish Story: This is My Home in April 2020—60 shows. 50 states. 40 days. What made you decide to push in a different direction?
Getting into film wasn’t a conscious decision, it was by absolute chance, although I’m so happy that we went in this direction. An artist management company that we were introduced to through a friend, came on board to help us execute the tour. They had the idea to film the quest and put me in touch with frequency pictures and it all stemmed from there really. I met with director Karl Nickoley and we set about planning the now hugely acclaimed, Emmy award-winning An Irish Story, This My Home.

You are the resident band in Rí Rá Irish Pub at Mandalay Bay in Las Vegas. How does playing in Las Vegas differ from playing back home?
Las Vegas is a killer place to play. Our gig at the Mandalay Bay is a brilliant window to the rest of the world. Our audience is predominantly American and they’re great music fans. They know how to support you and are genuinely interested in what you are doing. They follow you and turn up at various other gigs around the US. For that I’ll be eternally grateful.

You recently started interviewing artists in the US. Who has been the best one so far and who would be your dream person to interview?
Former Eagles band member Don Felder, that was pretty interesting. Matt Goss from Bros is quite an intriguing character and speaks very wistfully about the music business. There’s so many I’d like to interview, Jeff Lynn would be amazing, Santana—we’re currently co-producing our new album with his musical director and bass player Benny Rietveld. The list is endless. Other upcoming interviews include: Bill Medley, The Beach Boys, AMERICA, there’s even talk of Mike Tyson and Rod Stewart.

What’s next for the Black Donnellys?
We’re currently working on our new documentary, Through A Storm, which encapsulates the 9/11 atrocities from an Irish, artistic and human perspective, exposing unheard stories from FDNY and NYPD, Port Authority staff and construction workers. There were also some unexpected tales from famous musicians, comedians and actors. We’re also releasing a charity single, You’ll Never Walk Alone, to support the Stephen Siller Tunnel to Towers Foundation.