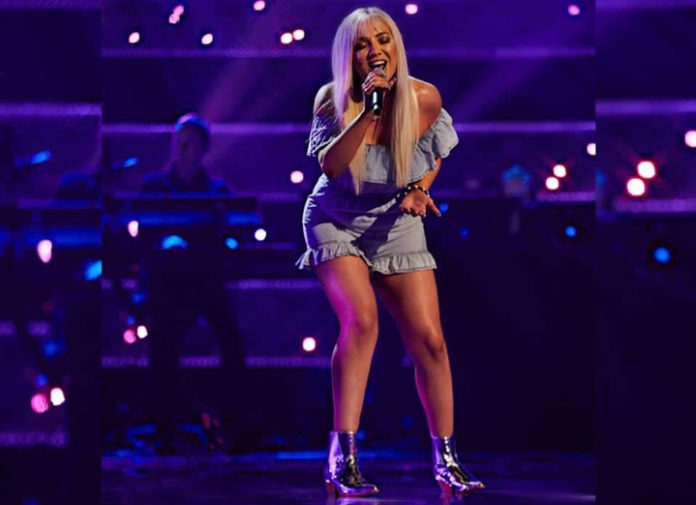 24-YEAR-OLD country music singer, Chantelle Padden (above), from Belmullet in Mayo, has not only made it onto the televised part of the reality show, The Voice, she has also battled through after taking part in seven auditions over seven months, fighting off over 100,000 applicants to get her shot at fame! As part of Team Olly, she’s now flying the flag for Ireland.

Who or what inspired you to make music?
My grandfather always inspired me to sing from a very young age. He was always performing on the weekends and telling me his stories about years gone by, when he was performing in bands and getting to perform in places in America and all over the UK and Ireland. I knew what I wanted to be since I was a toddler. Also, teaming up with Jeremy at Legacy Records—my manager—has been huge, he has been a vital part of my journey to date! He took a chance on this Belmullet girl—who was very lost, without direction at the time—and he helped me find who I am as an artist, along with the perks of giving me the resources and facilities to create and record music. I owe a lot to my Legacy Records Team.

How would you describe the music that you typically create and perform?
I have always had so much Rock and R’n’B influences in my sound, as I always admired big, powerful voices that could command a stage. But my passion is Country—three chords and the truth! So, I would describe my sound as New Contemporary Country. It is the only vein of the country music genre that has had any luck recently with charting in the mainstream—Dan and Shay, Keith Urban, Maren Morris, and so on.

If you could pick anyone who would you most like to collaborate with?
I would love to get the opportunity to duet with Chris Stapleton. He is right up my street. I would stand out in the snow listening to that incredible man!

If you could turn the clock back is there anything you would change in your career so far?
Apart from the fact I should have avoided a donkey or two along the way who tried to say if I didn’t sing a certain style, or look a certain way, that I wouldn’t make it, I wouldn’t change anything, because every dark day, every set back and knock, has led me to this point in my life. I only wish that I had had more courage and less fear of the unknown when I was going through difficult times.

What’s the best advice you’ve been given?
Be a shepherd, not a sheep.

You embarked on a tour around Ireland with Nathan Carter, who has brought new life to the Irish music scene. What was your favourite part of the tour?
It’s been so long since Nathan’s tour now, it was back in 2018, but yeah it was good craic getting to meet lots of new people and connect with new fans. I got to work with two of Nathan’s musicians from his band for most of the shows I performed at, along with us throwing in a few duets along the way! During that summer tour, I had just released my first album with Legacy which was called Let’s Begin and Nathan loved my sound and the style of country I was trying to pursue a career in. We ended up duetting on a song off that album and we would perform My Church at nearly every show. The audience loved it. It was a fun summer.

How do you feel the Internet has impacted the music business?
The Internet is a blessing and a curse with regards to music. A blessing as it helps us to reach a large audience, network and get our sounds out there, but a curse as it has killed hard copy sales, which there was way more money in, back in the day. People can get a lot of music for free online now, which is great for them, but not so good for the person who spends a lot of time and money to create the work.

You have an old country style. Which famous musicians do you admire?
Some Famous musicians I admire include: Chris Stapleton, Gary Levox (Rascal Flatts),  Dolly Parton, Tina Turner, Celine Dion and Whitney Houston to name a few.

What is one message you would give to your fans?
Don’t be like how I was when I was younger, scared to be different. Don’t fear the unknown, go for it now. Go for whatever makes your heart tick. If you fail, get back up again. Stop feeling sorry for yourself and try again. Someone who has the courage and drive to keep trying will never be a failure. It takes guts, determination and hard work to face your fears. Nothing is impossible.

What’s next for you?
Well, what’s for me won’t pass me, but I am focusing on turning my dreams into reality. I am working hard every day to get to the level I have dreamed of reaching. I am excited to release my originals and apart from that, I will continue to work on my craft and keep trying my best to bring joy to my followers through music. I would be nothing without the people that support me, so I want to make it, in this business, for each and every soul who ever believed in me.

Hopefully you all will get to see me in concert very soon and I would just like to say thank you so much to everyone who has took the time to read this and thank you very much for having me perform on the Glasgow Irish Bands and Gigs page, it was truly a pleasure and I really enjoyed it. Until next time!