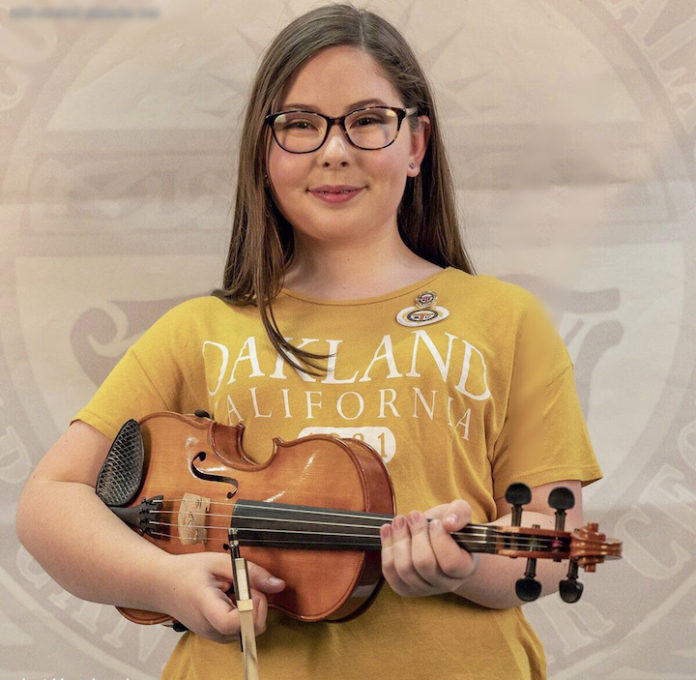 LIVING through the Covid-19 restrictions for 18 months, has resulted in even the cheeriest among us to doubt our ‘glass half full’ demeanour. Young people like me have missed out on all manner of things from attending school to sitting exams and from parties to holidays, to name but a few. Understandably, lots of extra-curricular clubs decided to shut up shop at the start of pandemic, but what of those who decided to soldier on with an alternative? Were they successful or was any of it even worth the effort?

One such organisation who made the shift to a digital platform was the Irish Minstrels branch of Comhaltas Ceoltóirí Éireann in Glasgow. I’ve attended weekly traditional music classes there since I was seven years old. Every Tuesday night, the corridors of St Roch’s Secondary School where they are based, would usually have been bustling with youngsters struggling under the weight of carrying instrument cases and folders stuffed with music. The alternative offered could hardly have been further removed. Small classes held within various breakout rooms using Zoom where only the tutor can be heard and everyone else on mute. No clashes of instruments being tuned, no scraping of school chairs across the floor as furniture is rearranged and none of the usual ‘craic’ with your pals. On the flip side, there was no crazy dash across town, no misplaced sheets of music as they were now published online and there was no hanging about at the end waiting on gossiping parents!

The format of the online classes naturally evolved over time. Some tutors would throw in a general knowledge question or two between musical phrases that have been known to generate some incredulous responses. Other pupils grew accustomed to bringing their pets on screen at the end of lessons whilst another class had occasional themed lessons such as wear your GAA top to class.

All the while, the organisation sought to emulate the activities that would typically occur in the calendar of events. For example, June is usually the month where we would have made the pilgrimage to the All-Britain Fleadh. However, Comhaltas in Britain put together a digital event called Féile, where musicians were encouraged to send in recordings of themselves playing their best tunes. Tuning in to watch the final product almost felt like a wander through the canteen at the fleadh—without the aroma of chips frying—as we were treated to short bursts of a reel on the pipes, a jig on the concertina or a hornpipe on the flute.

As the summer beckoned, we were encouraged to enrol for various summer schools that are part of the vibrant festival scene in Ireland. Usually only a small minority of pupils get the chance to attend these in person, but in 2020, the move to digital schools allowed greater participation for musicians from Britain. Many St Roch’s pupils registered and eagerly awaited the e-mail announcing who their tutor was to be for the week, the pool of which read like a who’s who of Ireland’s leading exponents of traditional music.

As the autumn approached, digital Tuesdays returned, however, in a new format. Masterclass Recitals became an add-on to follow lessons and some truly remarkable musicians popped inside our digital classrooms to play us a couple of sets. Newly crowned BBC Young Traditional Musician of the year, Michael Biggins, gave a reprise of his winning performance played on the very keyboard on which he had spent hours practising his pieces. Mirella Murray, accordionist with Cherish the Ladies, zoomed her way from Galway to Glasgow with a stunning variety of tunes executed to perfection. Rachel Hair not only played beautifully, but also gave us viewers a fascinating overview of features and differences between her two harps. These ‘Masters’ also took time out to answer our burning questions—an opportunity previously out of reach. When each was asked what their favourite gig venue is, the overwhelming majority said Celtic Connections is very hard to beat, leaving us glowing with pride at the welcome Glasgow gives to touring musicians.

This is simply a flavour of the activities that managed to attract healthy numbers of participants during the pandemic. We’ve also had big birthday shout-outs, online feisanna, quizzes, sponsored charity events, Celtic Connections performances and socially distanced recordings broadcast in Ireland on TG4. A pessimist may have predicted that Irish Minstrels’ switch to digital would quickly shed students fatigued from staring into screens all day. However for some students, learning music online took away the stress of performing in front of people. There was never going to be a perfect solution, however attendance rates have shown that our community of musicians and their families needed to keep in touch. This continued connection allowed us to look forward to face-to-face classes, which are now returning, slowly, but surely.