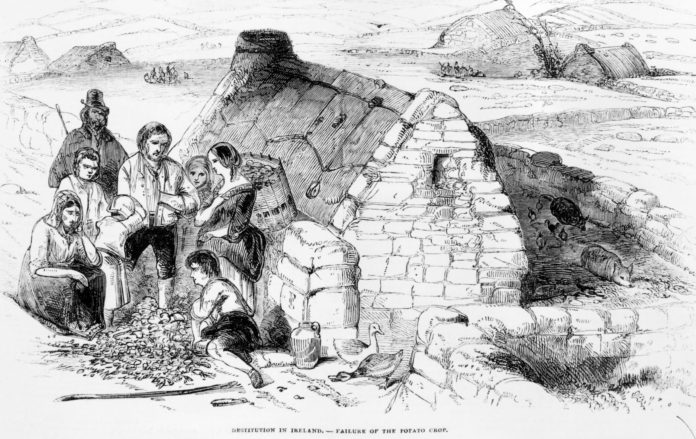 THE recent lifestyle of lockdown and working from home was, for me, a bit of a blessing. It allowed me the time I needed to categorise, tidy and then publish my extensive family tree research, which had taken over five years to amass. It’s nowhere near completion of course—it never is—but it consisted of a sizeable amount of written notes, digital images, copies and originals of birth, death and marriage certificates as well as a lot of primary and secondary material in the form of poor law archives, newspaper articles, various military paperwork and asylum records.

Like many west coast Scots born to an Irish heritage, my paternal folk originated in Galway, very likely of traveller descent or perhaps of a settled status somewhere in the beauty of Connemara, given the surname, McDonough, which was later changed to McDonagh. Due to only a small number of pre-1864 Irish parish records being digitally available, I’ve yet to fully pinpoint exactly where in Galway Bartholomew McDonough—born to Pat McDonough and Anne Sanledger (St Ledger)—was born. Some of the Irish in my maternal line—like the Larkins of Ballymoney—were Catholics mostly of the servant class, who settled in the Garngad in the early 20th century.

The paternal family line, which is the one most researched, were Glasgow rooted from 1880 onwards just in time for that new football and athletic company based in Parkhead. My previously mentioned great, great-grandfather Bartholomew—or Barth, Bartly and Barcly as he was sometimes known—was the origin migrant and a fluent Irish speaker according to the 1911 census data where he ticked the box for ‘G&E’ (Gaeilge and English). He was a stonemason to trade and worked well into his late 70s before dying at home in 141 Gallowgate of senility, in 1934. St Kentigern’s RC Cemetery is where his and his immediate family’s beautiful stone still sits to this day.

At aged 20 something, he was in Dale Street—now Tradeston Street, which is currently booming to the sound of the Barclays Bank expansionism. He then moved to the bright lights of the Gorbals’ Portugal Street, which has only recently disappeared. By 1920, Barth and wife Delia—a shortening of a nickname Bedelia which is Latin for Bridget—along with nine of their 13 children were Saltmarket, then Calton based.

They briefly flirted with the idea of moving to Montreal via The Sicilian, a migrant ship captained by an aptly named Mr Freer, but they were back in the east end of Glasgow within the year and thank goodness for that. No offence to Canada, but I love Glasgow with all my soul and cannot imagine anywhere else to call my home.

So, Galway to the Calton via the Gorbals it was. And contemporarily, the Calton is still home to some from that very same McDonagh lineage.

The McDonaghs and An Gorta Mór
Bartholomew must surely have frequented some, if not all, of the still existing Irish bars in the locales detailed previously, such as the Tollbooth at the Saltmarket, or Lynch’s at Ross Street. Places that I, his two-times great grandson can still be found in on occasion. Moreover, with my Celtic FC tinted specs firmly on, I like to imagine that he or some of his sons took part in the Brake Club and ‘away day’ culture of the early Celtic fans too. Suited and booted, chantering God Bless Ireland to the tune from someone’s melodion.

His father Patrick was born in the c1820-1830 period and, being of Galway stock, means that he was a survivor in one of the worst affected parts of Ireland during one of its darkest episodes—An Gorta Mor (The Great Hunger).
Dr Christine Kinnealy, the founding director of the Great Hunger Institute at Quinnipiac University, Connecticut, writes what I regard as the most definitive account of An Gorta Mór in essay form within Joe Bradley’s Celtic Minded 4. She writes that it was British imperial policy, fuelled by its ethnic outlook on the Irish Gael in particular as being inferior and defective in character, which turned a potato blight into a very avoidable humanitarian crisis. And is quoted in the New York Times (2014) as rightfully asserting: “The whole British argument in the famine was that the poor are poor because of a character defect… it’s a dangerous, mean spirited and tired argument.”

Empirically speaking, there are few better statistical accounts of the devastation caused by An Gorta Mór (above) than the Relief Commissioners Map of 1847, taken from theirelandstory.com. The worst affected regions are the darker ones—all are to be found in the west and south west regions of 19th century Ireland. The more dark the area is, the more rations were taken up in an attempt to simply stay alive. These were also the areas that experienced high levels of forced evictions during the Great Hunger—evictions mostly on British and Irish absentee landlord soil. The significance of capitalistic landlordism and the ways in which it exacerbated the Great Hunger in these parts of Ireland is made very clear by The Glasgow Sentinel who reported in 1851 that: “…landlordism had long reduced the people of that country (Ireland) to almost exclusive dependence upon that root (potato)…the ravages of disease among a people, enfeebled by subsisting upon innutritious and scanty diet were, in like manner, equally traceable to the monopoly of the soil by a selfish and dominant class… the people of Ireland found no resting place for the soles of their feet in their native land. The landlords had appropriated it all.. Famine, pestilence and expatriation, were merely different methods of executing the behests of landlordism.”

My three-times great grandfather’s Galway lies in one of the darkest shades of red. He was one of those ‘native souls’ who likely had no soil to call his own.

History is very much present
In researching your own family tree and coming across evidence that signifies what your family may have lived through, it is both a sobering and celebratory experience. The sobering aspect is easy to understand, but the celebration perhaps not. Personally, once the initial disturbance of thought associated with uncovering the fact that my three-times great grandfather is very likely to have been a Great Hunger refugee—given his age and suspected origin of birth—subsided, I was actually uplifted by this information. It seemed to show that I—and by extension my two children—come from a hardy stock of survivors and battlers. Strong, stoic or maybe just lucky. Perhaps it’s just a positive spin I need to put on it? I’m still not entirely sure.

Much more poignantly, when you find out that your own kin were very likely to have actually been there, in the eye of a very avoidable and racially charged storm of the Great Hunger and exploitation, it’s true to say that this has an altogether more powerful impact on the self and the soul.

When such a family history is discovered it is very biographical and this despite the fact that I wasn’t actually there. It is somehow tangible to me as a 21st century citizen of Scotland, even though it happened 150 years ago in Ireland. Because I know—as definitively as I could know —that my blood was there, I am therefore a part of it and Ireland’s An Gorta Mór is forever a part of me. I may just be an untouched piece of peripheral fibre at the edge of its dark tapestry of pain which eventually caused a starving for life, but I am there and it is part of me nonetheless.

Having a chance to refresh my genealogical skills and collate it into an 82-page document for my family to read served to remind me exactly where I came from. That, in turn, allowed me to reveal a lot more about who I currently am. Significantly, it further reaffirmed to me that I, like thousands of others, truly do belong, culturally, to the Glasgow Irish. And of this, I am extremely proud.