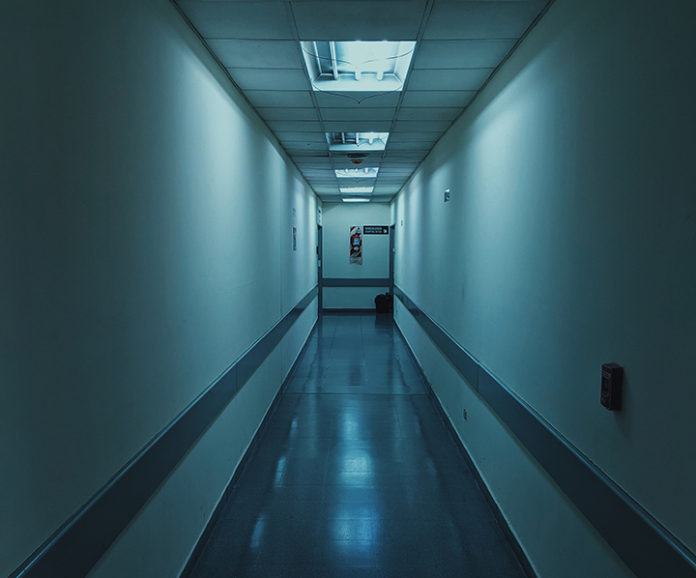 MY HUBBY dropped me off at Beaumont Hospital’s A&E department like a FedEx parcel, on time, safe and appropriately wrapped in thermal underwear, coat, hat, scarf and matching gloves. We had driven for five and a half hours from Donegal to Beaumont Hospital in Dublin on a numbingly cold November day. My consultant gastroenterologist suggested I go through A&E for further investigations following a six-week stay in Letterkenny Hospital, Donegal. They suspected Crohn’s disease and due to the rather unsettling fact that my bowel was still refusing to work effectively, it was looking likely that I required major bowel surgery. I said a tearful goodbye to hubby and armed with several books, I prepared to wait.

Three hours crawled past as I continued to endure a deeply uncomfortable HSE plastic seat in the waiting area, which now resembled the departure lounge of a busy airport. I was abruptly aware of a presence and the abhorrent stench of urine that invaded my nostrils without warning. An elderly lady spoke, her voice sounding like she had been steeped in the River Liffey and dragged along the bottom collecting debris on route.

“Sawree love,” she grated. She was spilling over the seat, the breadth of her body encroaching my space.

“No worries.” I smiled, turning myself away slightly and crossing my legs, thus creating some space between us. She sat hunched, crude legs astride, rummaging through the contents of a Tesco bag. Her feet were huge and her ankles were so puffed up they literally overlapped the sides. She had no ankle bone to speak of and there was a huge hole in her tights exposing spider veins, cuts and bruises.

“Can’ find me purse, dunno wha’ I did wid it.” She rummaged. “Jayzus, me head’s sore.” She turned, revealing a nasty laceration on the side of her head with a clump of congealed blood.

“That’s ok, let me help you.” I got to my feet and pulled the strap of my handbag over-head.

“Tanks. I have an Auntie Kat-leen and that’s just how we pronounce it too.” The stench was overwhelming but I wrapped my arm around her regardless. We took forever, but made the few steps to the ladies’. She leaned heavily on me as I reversed her into a cubicle and helped her hitch up her skirt, trying avert my eyes so as to save this poor woman’s dignity.

“What happened you Kat-leen? How did you get into this state?”

“Fell over da feckin cat didn’ I. Lay for long enough before poor Martin found me lyin’ at da back door. Wha’ a state he was in.”

“Can you try to reach around and pull your tights and knickers down for me.” They were sodden, she’d clearly had several accidents whilst waiting for help. It broke my heart. Between us we managed and I gripped her tight as she lowered down on to the toilet seat.

“Think we can do away with these tights eh?”

“Yeah go on, I tore dem anyways wen I fell over.” I checked the Tesco bag and found a towel and some clean underwear and helped her wash and change before going back out. A&E was jumping.

An intoxicated man came pinballing through the automatic doors accompanied by a blast of November night air. He ricocheted off the walls whilst singing: “Hey, did ya happen ta ssshheee da most boootefull gerl in da wur…” before finally slumping to the floor. “Wuuurrrld.” He looked around, impervious to what had just happened. Probably wondering why we weren’t all joining in. The receptionist rolled her eyes and picked up the phone. Pinball Man was no stranger to A&E. My name was called and I was taken into a room where I had my blood pressure and
temperature taken by Nurse Sanjana Patel. Her beautiful shiny skin and hazelnut eyes glistened in the light of her desk lamp.

“We are having many problems with beds just now, I am so so sorry.’ Her honesty softened me.

“But I’ve come so far.’ My voice sounded tired.

“You are from Dun-e-gawl? This is far away yes?”

“Yes. My husband drove for over five hours and he’s already gone back.” My voice was quivering.

“You will get a bed, the question is when? I am so very sorry for this situation, but we are, how do you say, bursting by the seams.”

Doctors and nurses were flying around like they were playing Quidditch. Nurse Patel probed a porter who was taxi-ing a patient on a trolley to find me a seat.

The scene was chaos, like the fall-out from some major incident. Every cubicle was occupied with a half-drawn curtain; some had no curtain. The centre of the room was jammed with trolleys and wheelchairs, all of which were occupied. One young boy hung over the side of his trolley vomiting into a cardboard bowl. A man walked past wheeling a saline drip alongside him, his hospital gown flapping behind exposing a very wrinkly, bare backside. An old woman cried out over and over: “Please take me to the toilet! Pleeeaaase!”

A doctor, two nurses and a porter were holding down a teenage girl who screamed and kicked, lashing out fiendishly. I waited for her head to spin around like the Exorcist girl. “Get your feckin’ hands off me now. I’ll bite ye, ya bastard. DON’T you feckin’ touch me. Don’t touch me!”

I saw a small plastic step in the disabled toilet which I took out to the corridor and promptly parked myself on it. I pushed my back in tight to the wall and opened The Kite Runner. It was 10.30pm. I had been here for nearly seven hours.

I texted my hubby to ensure he had arrived home safely. He asked if I was tucked up in bed and I hadn’t the heart to tell him I wasn’t, so I lied. Cleaning staff ran with mops, buckets and detergents like a platoon regiment. Nurses appeared to levitate. There was one I had noticed earlier who stood out because of her strong West Indian accent. The epitome of happiness amidst the madness. She stopped dead in her tracks as she was whizzing past me. “Aw Lord. What eez dat you are sittin’ on, ma dahling?”

“Eh, I’m pretty sure it’s a child’s step for the toilet. I took it from the disabled loo. Is that ok?”

“Ma God, dis place eez gettin’ worse E.VA.REE day! Give me a moment please.” She swirled around like Wonder Woman striding towards the fire exit and within a minute she had returned pushing an empty wheelchair, evidently for me. I heard someone singing.

“And the aul triangle went jingle jangle…” It was Pinball Man. A buzzing sound came from her breast pocket.

“Here take dis, I mus’ go.” Pinball Man was being held up by two porters and led towards the gent’s. I almost felt guilty taking the wheelchair, but compared to my plastic stool, this was a proverbial throne. My arse was now completely numb. I could hear Kat-leen’s coarse commentary about falling over the feckin’ cat and lying immobile on her back steps. I saw Exorcist child being wheeled off, now sedate and calm. Pinball Man was seated at the nurse’s station wrapped in a blanket with a mug in his hands. I lost myself in the Afghan mountains and the tale of two best friends growing up under a Taliban regime. Sleep mugged me in the early hours, and the anarchy disbanded. I dreamed of war zones and bullets and wounded bodies. I felt a weight of warmth around me, comforting and kind. My neck ached from being tilted against the wall that was my makeshift pillow. I opened my eyes and blinked to focus. Pinball Man was tucking me in. No words were required, his gesture said it all.

I graduated from wheelchair to trolley a full day later and was now in the centre of the room. I daren’t ask about a bed. A four-year-old girl lay across from me, her mum volunteering that she’d fallen off her bunk bed and broken her arm, which required surgery. A 52-year-old man lay on the trolley on the other side of me. He had suffered a heart attack. Kat-leen was now clean and stitched in a fresh hospital gown and asleep in a cubicle. Pinball Man was awake and going somewhere towards sober, but the madness ensued. At 2am on the Tuesday I got into a bed in Ward 34 where a softly spoken Mayo nurse helped me unpack.

“Wish I was. Made some friends along the way though.”

L J Sexton, mum of four returned to university to pursue her passion for the written word. She achieved her Honours Degree in English Literature and Creative writing and hasn’t stopped writing since. Lyn is born of Irish parents and lived in Donegal for eight years. She is also the press officer for Irish Minstrels CCÉ music group based in St Roch’s Secondary School