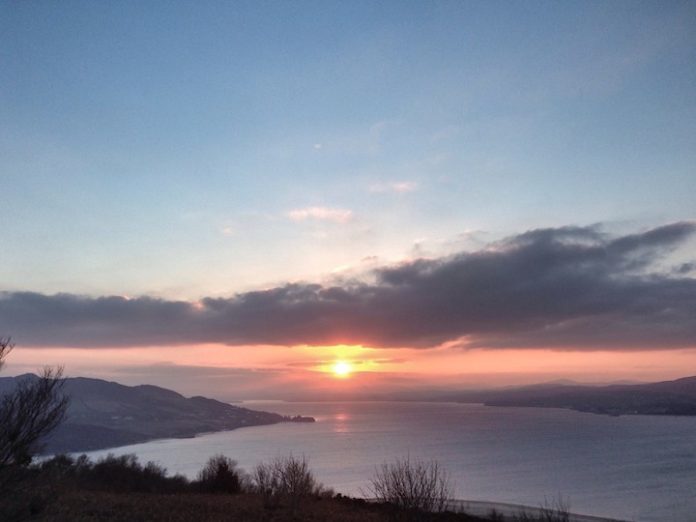 Everyone has a story unique only to them. This is a little collaboration of my Auntie Grace’s stories from her childhood in Donegal.

IT WAS the writer and slave trader John Newton, who in 1772 almost perished in a storm on Lough Swilly, wrote the legendary Gospel song, Amazing Grace. A self-confessed rogue, Newton prayed to God to save his life and upon his survival he converted to Christianity and turned his life around. Most people are familiar with the hymn Amazing Grace—it may even spark recognition of a special person or event in their life. For me it makes me think about my Godmother, Grace Kelly. Yes, I have an auntie called Grace Kelly!

Auntie Grace was born in a place called Drumhalla outside Rathmullen, which coincidentally overlooks Lough Swilly. By contrast, Grace Kelly the Hollywood film star who became Princess of Monaco was born in Philadelphia to self-made millionaire John Kelly and his wife Margaret Majar. Now I have no clue whether my wee auntie was named after the song or the actress, but either would be impressive. Of course I’ve never entertained the possibility that she could’ve simply been named Grace just because her mammy and daddy liked the name.

Auntie Grace is in her 80s now and was born into the Doherty—Madjie’s as they are known—family of 11 children. At birth she was so tiny—weighing just 3lbs—that she was placed inside a shoe box, which is ironic because there was a serious scarcity of shoes in the Doherty household. It was only when Grace was older and her daddy managed to sell a few piglets that he was in a position to buy shoes for his children. Auntie Grace talks matter-of-factly about walking to Mass up to Auchterlinn Chapel, a journey of over three miles, more often than not without shoes on her feet. She told me: “We walked in the rain, the hail or the sunshine. We were never allowed to miss Mass and you daren’t even think of it. If you were sick and you missed Mass then you had to go to confession before the following Sunday.” She has a picture of a Mass rock in her hallway, which has been there for as long as I can remember—a blatant reminder of a generation who risked their lives simply to attend Mass. It saddens Grace that so many nowadays have forgotten this fact.

Her daddy Patrick worked the land and her mother worked in the Fort Royal Hotel before she married. The entire Doherty family had a reputation for being hard workers so it was no surprise that her brothers were hired out to big Protestant farms in the north.

Auntie Grace worked for a nearby family—the Sheridans—who ran Newton’s shop. She would scrub floors and do washing and iron clothes for half a crown—12p in today’s money. She vividly remembers working there when she was only 11 or 12. One day as she stood ironing a shirt, Julia Sheridan, the doctor’ wife came in and said to her: “Grace, you must always iron the shirt collar first.” But Auntie Grace replied with assurance: “Mammy says you must always start with the shirt tail, that way if the iron’s dirty you won’t see any marks.” She wasn’t cheeky or disrespectful; she was merely stating a fact. Mrs Sheridan never forgot the logic of young Grace and apparently told everyone the story!

I too have benefited from her frank manner and wise words throughout my life. When I’d tell her I was pregnant, she’d laugh and say: “Well Lyn, when you put your ass in the fire, you’re sure to get blisters.” She was right about that for sure. Another favourite of hers is: “Always paddle your own canoe,” which I took figuratively and I’m proud to say that I am fiercely independent and reliant on no one and have since passed this powerful counsel onto my own four children.

Despite a poor and at times tough upbringing, Grace was happy and says they never went hungry. “There were always plenty of spuds and mammy baked every day.”

Her four older brothers left Ireland looking for work—all of them becoming integral members of the 45 strong squad named, ‘The Tunnel Tigers.’ Paddy, John, William and Dan all worked with the squad who broke the world record for grinding through 170 metres of rock in seven days on the St Fillans section of the Breadalbane hydro scheme in Perthshire.

Paddy, a foreman was known as the ‘one eye,’ because his right eye partially closed over. This could’ve been easily corrected with a few stitches, but he refused, telling the doctor he was known as ‘Paddy the one eye,’ so there was no point in doing anything to change it. He was highly respected within the construction industry, a knowledgeable man who no doubt could’ve gone to university and studied civil engineering if he were given the opportunity, but in those days it was about making money, and so that’s what they did. The hard graft of all four sons paid for a new family home in Drumhalla.

Auntie Grace speaks fervently about how smart Paddy was, but the truth is, so is she. Her mental arithmetic skills still astound me—she could whip that Carole Vorderman’s ass any day of the week let me tell you. When watching Countdown she usually has the answer before any of the contestants do. Such skill stood her in good stead for her numerous bar jobs across Glasgow. As a teenager I did a few shifts with her and my Uncle Danny in Tennant’s Bar, Byres Road and she’d have a round of drinks totalled up and on the bar before I’d even poured a pint of Guinness. She did everything with haste, even when she gave out to us. To this day I’ve never seen a slipper drawn so quickly and fired across a room the way she could do it. (She will laugh when she reads this) Once in Rathmullen a few of us went swimming, way beyond where we should have been mind you and by God she never missed and hit the wall.

Back then there was a squad of us staying in Drumhalla on our summer holidays. I was taken along with her own four weans and two other cousins from Glasgow, Jimmy and Martin, plus another four cousins who arrived from Luton. Dinner time was like the parable of the five loaves and two fishes. It was as if by some miracle that Auntie Grace managed to feed a horde of hungry mouths with a couple of packets of Doherty’s mince and a colossal pot of spuds.

Grace came to Glasgow at 17 and worked in the Singer Sewing Factory in Clydebank. She told me how many years before her Uncle William had also left Ireland and was employed at the Singer factory. However, back then the gates bore the sign ‘CATHOLICS NEED NOT APPLY,’ but being named William had its advantages it seemed, as Singers assumed he was a Protestant. William went on to spend his entire working life there and retired out of it.
These days, Auntie Grace loves nothing better than getting a run home to sit at the kitchen table in Drumhalla overlooking the field they call the Keelian and Lough Swilly. Sadly times have changed and people have passed, including her beloved husband, Danny.

Sometimes we don’t have to look too far in life to find the people who reflect the qualities of real superheroes—people we look up to and respect. Many of you will be reading this and thinking of strong Irish women just like Grace. Women, who have lived through harsh times. A generation of stoic women with integrity and character, women whose voices, just like my wee amazing auntie Grace’s, whose sweet stories and memories shall remain forever in our hearts and minds. I hope and pray that she continues to tell me stories of her childhood in Donegal for a long long time to come.