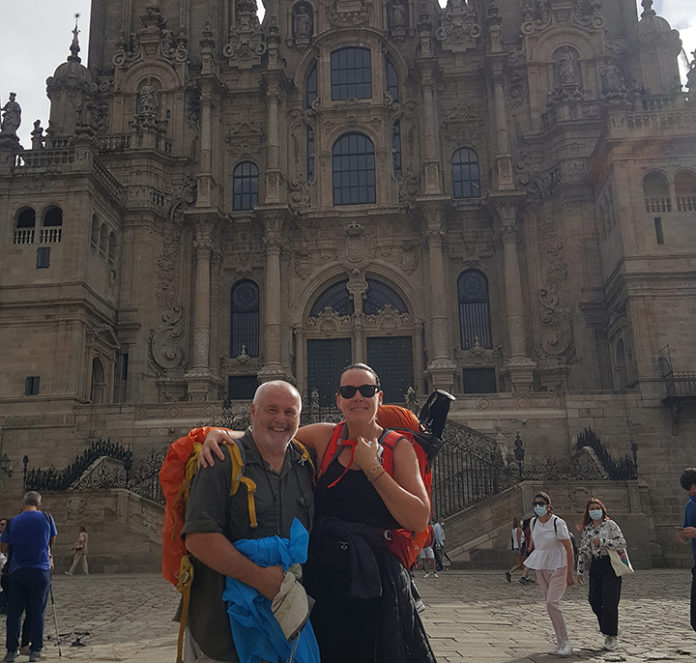 I RECENTLY left Glasgow bound for Santiago de Compostela to walk the Camino Way… alone. Strictly speaking this journey began some years ago when I began to write my book, Sinead’s Way, about Sinead (45) who walks the Camino and meets Gerry (70) who changes her life inextricably and who she falls madly in love with. I knew there were inaccuracies, things that needed authentication—apart from the meeting the older man bit—and there was also some hidden force surging me forward, pushing me to go.

The Camino presented me with the opportunity to walk alone, to slow down, to create space in my life away from the busyness. Let’s face it, we are all tied to our gadgets, some more than others, but ultimately I needed to walk in Sinead’s shoes and come back with substantial changes and edits and a good ending.

The kids were joyous and supportive. The hubby? Not so much. You’d have thought I’d booked Ibiza Club 18-30. On reflection and as I write this, I understand why. He was conjuring all sorts of atrocities and mishaps. His wife, alone, walking for miles and miles through quiet forest trails, staying in hostels with mixed dormitories, not knowing from one day to the next where she was staying, Covid-19 still rife. Ok, I admit it, perhaps he had a point. He had a million reasons for me not to go, but I had a billion reasons to go.

I wanted to walk like a true pilgrim, rucksack on my back, walking boots and sticks, the whole shebang. Truth be told, a true pilgrim would’ve walked it in their bare feet like they did thousands of years before. They believed that in baring the ‘soles’ of their feet to the elements made it easier to bare the ‘soul’ and find the true self. The Ley lines of energy allegedly connect geographic locations and structures across the earth, like the straight lines drawn between the constellations. Many believe that several Ley lines intersect along the Camino and that their energy brings about clarity of mind. It was all rather mystical, but it made sense to me.

I flew into Santiago, took the bus to Valença, Portugal and crossed the border back into Spain. I stayed my first night in Tui in an albergue (hostel), where the hostess directed me towards the town for food. Weirdly, I turned left and found myself outside a beautiful little chapel, St Bartholomew’s, where as I stood reading the history of it as a cluck of old women sat on nearby benches chatting animatedly. A priest appeared, running towards the chapel doors and the women followed. I quickly established—in my broken Spanish—there was Mass at 8pm.

The inside of the church was exposed beige coloured stone and the altar’s background was a mural of the Crucifixion. I felt an instant sense of peace and belonging here; like right at that moment I was meant to be there.
The Mass and the Rosary that followed were in Spanish—obviously—but I followed it easily. There are no language barriers in prayers. My friend Siobhan’s mum kept coming into my thoughts. Mary had passed away just a couple of years ago. She had also walked the Camino and it had changed her life. I wondered would it change mine. I slept contentedly that first night; and Mary stayed with me as I walked my way.

My first day’s walking was to be my shortest, which was grand, as it meant I eased myself in gently. The route was the ‘complimentario’ through vast forest pathways, farms, vineyards, fields of corn and lush greenery. Stunning. I ate alone in the small town of O’Porrino and was in bed early which was just as well because yer man outside, Mr Cockerel, was on a mission to shake me from the bed at 4.30am. Good morning to me! Ok, so perhaps he did me a favour, because as I followed the yellow and blue shell symbol onto the original Roman road and a steep incline that went on forever—at least that’s how it felt—I was glad I’d got up when I did.

I arrived at the Church of Santa Maria (Monto) where several small groups of pilgrims gathered. Despite the earliness, the heat was desperate. I visited the Camino shop and bought a t-shirt emblazoned with a bootprint and the slogan, ‘You’ll never walk alone.’ I thought of family and friends at home and knew that I wasn’t alone—they were all with me in spirit. The climb only got more intense and my walking poles, along with my prayers were what propelled me forward.

Every pilgrim, farmer, walker that passed said: “Buen Camino,” calling out like an old friend. Familiarity was such a comfort and it proved how much the pilgrims were respected. Farmers cut hedges, old women dug their vegetable patches and passed peaches and apples over their walls. I passed a tethered donkey and numerous holy statues and crosses, smothered in relics, Rosaries, Novenas and floral offerings. Were it not for the intense heat and the vines, I could be forgiven for thinking I was in Ireland. The simplicity of these people’s lives and their kindness and warmth all added to the spirituality of the way.

After hours of even more intense inclines, I began descending into the town of Redondela where I sniffed out an Irish bar—Celtic Luada—like a lone Irish wolfhound, and decided I’d go later for a drink. I half expected some bucko from Mayo behind the bar and a Dublin busker singing The Fields of Athenry. I got neither; but I was served some traditional Galician food and a gorgeous glass of white wine by a delightful Spanish woman; and all for the meagre sum of €2. She fed me so much that I didn’t need dinner. I felt it only fair that following the pandemic I should help the locals and give back to their economy… so I ordered a couple more, because that’s the kinda gal I am.

I met a Dutch woman who sang What A Wonderful World at the top of her lungs, encouraging us all to join in. I met a brother and sister from Oregon with an Irish granny and a west coast Matthew McConaughey drawl. We talked Ted Bundy, Irish music and the Magdalene laundries. Josh, the brother would say, “Agh haaaaaaw,” in reply to everything I said, which left me confused, not knowing whether I was boring him or I’d just revealed the whereabouts of the Arc of the Covenant.

I met three German women and a Russian who stayed in hotels and not hostels. They all had their rucksacks collected each morning, which I did think was cheating. Lina from Russia told me she thought the Irish were rude and drank a lot. I was instantly defensive, of course, curious about where she’d gotten this impression from. It was only later when I showed her a photograph of my four kids that she said: “Zey are not rude.” Then the penny dropped and my offence disappeared like the legs of the wicked witch of the west. She’d meant red hair. Doaaahh! I laughed for hours afterwards. They invited me to dinner where I spent most of the night playing charades in a desperate attempt to be understood.

Weirdly enough when I was explaining the contrast between the younger female pilgrims underwear on the washing line—i.e. their bits of string—compared with my more generously proportioned Bridget Jones-sized knickers, they understood completely. I suspected they’d been watching this Irish washerwoman at work and had a good laugh at my expense. Either that or they’d drank enough beer and wine that everything I said was suddenly hilarious.

Hilda suggested we visit the famous Caldas de Reis hot springs which are said to have great healing properties. We were all eager as our feet were in need of some TLC and a hot soak sounded delightful. And so the four of us sat, hot footed and giggly, sipping on Estrellas, when a couple of guys from the Czech Republic strolled up. Their interaction with the girls was brief, as was the time it took them to remove all of their clothing and jump in. I was aghast! Struck dumb, which isn’t like me let me tell you. Within seconds Hilda too was as naked as the day she was born, her dress and string discarded with neither inhibition nor blushes. It was time for a sharp exit so I bid them: “Buenas noches” and walked briskly back to my albergue.

It was mid teeth brushing that my ‘Irishness’ became all too obvious to me. We are a nation who struggle to say or make any kind of reference to words meaning ‘genitalia,’ instead saying things like, ‘down below’ or ‘the nether regions’ in confessional tones behind closed palms—never mind being able to cast our clothes and parade with gay abandon in front of complete strangers. Please bear in mind this was a provincial town, like Donegal town or similar, so I giggled at the idea of such a spectacle happening there. Jaysus, there would be an uproar! But maybe this is what the real pilgrims did back in the day? I don’t know, but I knew one thing, this pilgrim was holding on tight to her Bridget Joneses and her dignity. And to think they thought the Irish were rude and fond of the drink? By God they could teach us a thing or two. I fell asleep pondering the question that maybe Hilda had also misinterpreted the meaning of the ‘Ley lines.”

It was day six before I heard an Irish twang. A Belfast man was barking at two Americans, sounding every bit like an AK-47 whilst relaying the story of James Joyce’s and Norah Barnacle’s daughter Lucia. I was intrigued so I joined in the chat. Finbar and I became firm friends in five minutes, owing to our love of literature and Ireland. We were photographed together like life-long friends outside the cathedral. I was emotional and relieved to have walked the Camino but I was overjoyed at having met ‘one of my own.’ Finbar has walked it six times, but I doubt I’ll be allowed away again as I came home to hubby on crutches and two out of four weans with Covid-19. You couldn’t write it… then again I just did.

Whatever it is that motivates you to walk the Camino, to find peace, to seek solace or forgiveness or maybe you want to try to find yourself again, then do it. I urge you. Go, switch off your phone and walk, for you shall find a peace that you never knew existed on God’s green earth.

LJ Sexton, mum of four returned to university to pursue her passion for the written word. She achieved her Honours Degree in English Literature and Creative writing and hasn’t stopped writing since. Lyn is born of Irish parents and lived in Donegal for eight years. She is also the press officer for Irish Minstrels CCE music group based in St Roch’s Secondary School