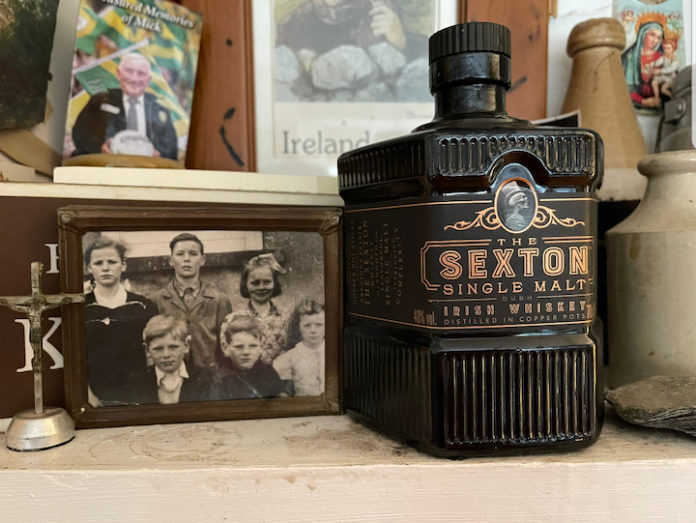 IF you like a short story then I recommend James Joyce’s The Dead, with its powerful themes of love and loss, modernity and poverty, indeed all the gritty elements relating to a post-colonial Dublin. Joyce’s story isn’t about death directly, but it explores the intersection of life and death and raises questions about the loss of Irish identity—the death of faith, the Irish language, the culture and the death of the protagonist, Gabriel’s marriage. The entire story revolves around a party and if there’s one thing the Irish do well, it’s party, especially around the guise of death. Yes, we Irish have a somewhat elitist reputation when it comes to wakes and funerals and yes we also have a vested interest in maintaining this status quo. Now you’re probably wondering where I’m going with this aren’t you?

So, I am a ‘Sexton,’ which if we take the Oxford dictionary definition means ‘a person who looks after a church, churchyard or is a gravedigger.’ Ironically enough my Granda, John Sexton, was a gravedigger in Thornliebank Cemetery and also tended the grounds of his own parish, St Stephen’s in Sighthill, and when I did some digging of my own, (sorry, had to!) I was surprised to learn another curious piece of trivia; that granda’s birthplace, Mullinalaghta in County Longford—in Irish, Mullach na Leachta—translates as ‘the hill of the standing stones or gravestones.’

I guess it’s fair to say that death is in my DNA, and possibly explains why I enjoy walking around graveyards so much, but Granda Sexton used to say: “You’ve more to fear from the living than the dead,” and I couldn’t agree more.

In 2018, a new single malt whiskey called, ‘The Sexton,’ was made in Ireland and launched in the US, and would you believe this, my cousin Raymond Sexton who worked for Grants whiskey at the time, was in America on business and came across ‘The Sexton’ (right) at a distillery he visited. I think he tried to smuggle a few bottles back for us, but he would’ve needed a container. The TV commercial features a funeral cortege at a graveside with the backing song, Enjoy yourself—it’s later than you think. The black bottle is emblazoned with a skeleton wearing a black top hat and the whiskey is triple distilled in copper pots then intentionally ‘laid to rest’ for four years. Have you ever heard the likes of it? Laid to rest indeed! Armed with all of this knowledge I was beginning to see a theme emerging around the Sexton name.

This leads me naturally to my next fascinating fact about wakes, a concept that evolved when families needed assurance their loved one was in fact dead, and so they’d wait with them in case they would ‘wake up.’ But what many people don’t realise is Poitín had a part to play in this ideology.

Poitín was created by an Irish monk in the sixth century, a word which is a derivative of the Irish word pota, meaning ‘pot,’ which describes the copper pot stills that people used to make it. Now the consequence of drinking pure alcohol could potentially leave people in an unconscious state for anything up to 72 hours, which along with drinking from dirty lead tankards, meant lead poisoning for many and ultimately death for others. They’d be laid out on the kitchen table where the family waited for them to ‘wake.’ Snuff was given to revive them, and so this is where we get the term ‘snuffed it’ from. The ‘wake’ soon morphed into more of a celebration of life where food and alcohol were consumed and stories shared by family and friends. The clocks were stopped to alert visitors to the time of death and the mirrors were covered for fear of seeing the spirits reflection. There was also period in time when a piece of string was tied to the deceased’s finger and a bell attached at the top of the grave in case they were buried alive. A macabre thought I know, but this is where the phrase ‘dead ringer’ came from.

I’m delighted to report that no such bizarre rituals apply today, but what we have held on to culturally is the importance of the wake and as a ritual how it revolves around helping families find peace and acceptance of their loss—helping them on their healing journey. There is great comfort to be had in talking about the deceased at the wake; this is what keeps a person alive in our memories. The harsh restrictions during the Covid-19 lockdowns meant so many lost out on this all important ritual. In the same way that Mass is a celebration of their life, so too is the social celebration. When we buried our Nana, Peggy Sexton, the family matriarch, the whole family gathered, drank, sang and danced the night away. Apparently someone asked what the party was for and were politely told it wasn’t a party, it was a wake. What can I say? We did it Irish style, just as Nana would’ve wanted.

True story… I once attended the wake of someone I didn’t know. Obscure I know, but living in rural Donegal this was ‘normal’ and it was etiquette. A neighbour’s mother died suddenly—literally minutes after stepping over the threshold of her daughter’s house after travelling from Glasgow. I went, reluctantly I might add, with two neighbours armed with a dozen home baked scones and a batch of shortbread—again standard practices which families truly appreciate. The body was laid out in the bedroom—a very typical Irish room with two double beds at either end and a wardrobe in the middle. I approached the coffin and bowed my head to say a prayer for this woman I didn’t know. There were photographs on the wall, which I scanned hoping to place her. I couldn’t.

I went and sat on one of the double beds. The room was hauntingly quiet and no one spoke, which was unnerving, but then another mourner arrived and did exactly as I’d done and sat next to me on the bed. This was when the haunting silence was broken with these immortal words “Isn’t she wile fresh luckin?” Fresh? She just said fresh! Seriously? The word ‘fresh’ conjures many metaphors; fresh bread, fresh flowers, fresh faces, but one thing I’d never attach ‘fresh’ to is a corpse! So I started to laugh, which turned into a fit of laughing. Shoulder shuddering, belly busting, tears running down the face kinda laughing. The kind you have when you’re someplace you definitely shouldn’t be laughing!

The others looked on as I folded forward, hands smothering my face concealing the laughter. They thought I was crying and couldn’t understand why. I did the only thing I knew I had to, which was leave. I composed myself enough to leave the room and the girls duly followed, only to be met by the deceased’s son at the door who told us his mother wouldn’t be buried in Glasgow for another three weeks. As the girls and I left I couldn’t contain myself; ‘Well by God she’ll not be fresh luckin by then!’ We laughed the whole way home.

What struck me at that wake, and again at others I attended afterwards, was how people normalise these remarks about how a corpse looks. You know, one minute your sipping tea when someone in the room says, ‘Jesus doesn’t he look just like himself!’ And the tea’s spurting out all over your top and your coughing and spluttering because inside your head your screaming, ‘well who the feck else would he look like?’ Can you tell I’ve had one too many moments like this?

On a serious note, I’ve experienced many significant losses in my life, but one thing that remains consistent is the rituals we have when burying our dead. We get it right. The wake, the tea, the story sharing, the Rosary and the Mass, the coming together—it’s all symbolic of who we are, our culture and faith, yip even the Poitín and whiskey. Hopefully we’re all a long way off from having to think about it, so in the meantime remember ‘The Sexton’ theme song: “The years go by quicker than you think, so enjoy yourself enjoy yourself its later than you think!”