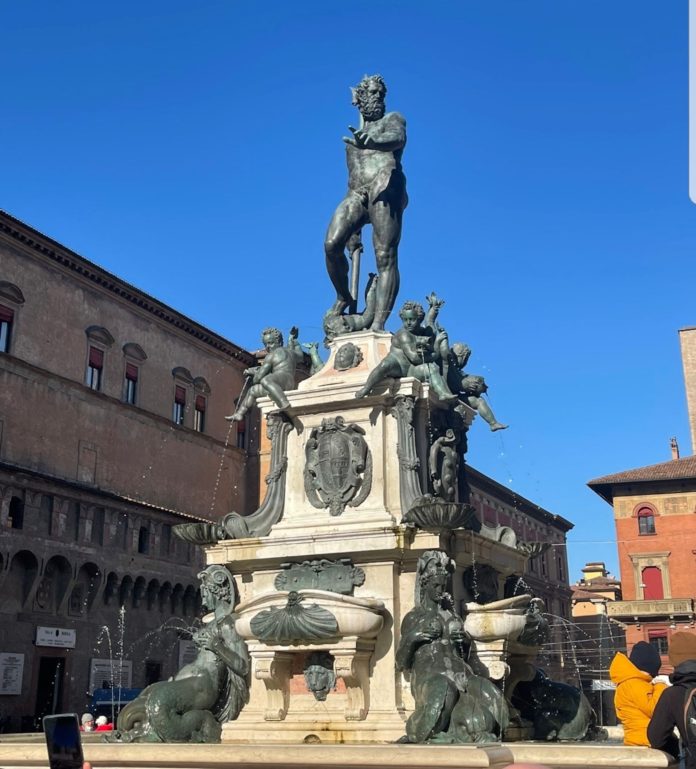 IN THE immortal words of 90’s German band, Scooter: “Hello, hello good to be back,’ following our three month hiatus—a short break but by God it’s been eventful, well for me anyway. I’ve eaten Bolognese in Bologna and had a wee rub of Juliet’s breast in Verona. But before you go getting any strange notions, I am indeed referring to the bronzed statue of Juliet in the courtyard beneath the famous ‘Romeo and Juliet’ balcony in the heart of Verona. People rub it for luck. Luck me arse! Didn’t bring me any luck as I came back from Bologna with Covid then tore the cartilage off my knee, had a big knee surgery and have been in a leg brace for eight weeks. This could be a whole other story in itself, but I won’t bore you with the details.

As part of my son, Ciarán’s degree course studying the history of art he had the opportunity to go to Bologna for six months through Erasmus. Now, I am a woman who shares Grace Hopper’s philosophy: “A ship in port is safe, but that is not what ships are built for. Sail out to sea and do new things.” So this opportunity required neither thought nor persuasion. It was a no brainer.

Università di Bologna, which is the oldest university in the world (1088) is by Latin definition, ‘The Nourishing Mother of Studies,’ and with its rich history provided the perfect place to study this subject. I wish I could tell you that obtaining a visa was quite as nourishing, because it wasn’t. It was a complete stress and took multiple calls/emails and trips to the visa office at Leith Docks to finally get his six month visa. Moral of the story? Get yourself an Irish passport.

There were multiple expletives shooting from my mouth over the course of this drama—all of them directed at Boris Johnson, Dominic Cummings and Nigel Farage, ‘The Three Brexiteers.’ I could call them worse. This was the start of it, and what frustrated us more was we could’ve obtained Irish citizenship and gotten passports for the entire family when we lived in Donegal. Yes I could indeed kick my own arse! Anyway I shan’t dwell too much on the downside of this costly and trying experience because Ciarán has returned home and it was all worth it. He had an absolute ball.

I travelled with him in January to help him settle—sure of course I did—and we both fell in love with Bologna instantly. When we sauntered casually from his student hotel on our first evening towards the city our chins and noses jutted out before us in anticipation of the scintillating sites and scents—all under covered arched walkways which continued through the city centre. There are 666 arches in Bologna, apparently in recognition of Our Lady’s defeat of Satan.

We wanted to sample the cultural ritual that is ‘Aperitivo’ derived from the Latin, aperire, meaning to open the stomach before dining. We found a quaint bustling restaurant smack in the centre looking onto the tallest tower in Bologna, ‘Asimelli’—of which there are many by the way —all symbolic of a family’s wealth and status. We were served an Aperol Spritz, which if you haven’t sampled one then I urge you to. It looks just like Irn Bru with its vibrant orange colour and could quite well be the Italian equivalent of our home brewed Scottish ‘amber nectar,’ because they drink the stuff the way we drink Irn Bru and since that first authentic Aperol Spritz I haven’t looked back. I’m hooked.

If that weren’t magnifico enough, it came accompanied by various small plates of home cooked cuisine, miniature bruschettas, arancini, olives, crostini and various small pasta delights. We ate with a primal hunger like we’d never had food before. To be fair we’d left Edinburgh at an ungodly hour and this was our first proper meal. This was our baptism in the river of this student-filled food capital of Italy.

We slept like babies rising early to wander for hours the next day, our trainered feet undeterred by our desire to ‘take it all in.’ The bustle of the Piazza del Nettuno where stands a fountain with a life-sized bronze statue of Neptune commissioned by Cardinal Legate Charles Borromeo to symbolise the election of his uncle, Pope Pius IV. We people watched from Piazza Maggiore as stylish Italians, who despite clear blue skies and warm sunshine were wrapped in quilted jackets and scarves. We felt it was tropical—they clearly didn’t.

It was when we stepped inside the heavy doors of the Basilica di San Dominico our feet stilled, the city stilled… as did Ciarán. With our chins stretched Heavenwards he was rendered speechless. I didn’t fully appreciate that his three years of study had been all theoretical and that walking into this basilica was his first time seeing such Al frescos on the ceilings and walls. ‘St Dominic’s Glory,’ by Guido Reni. There are three Michael Angelo sculptures and ‘The Crucifixion’ by Giunta Pisano. It also houses a piano which Mozart played. What Ciarán had studied in books and on film was now before his eyes. I have visited Rome so I had an expectation… Ciarán didn’t.

I left Bologna and my boy after four days knowing I’d return. And so we did, hubby and I in February for four days and again with the whole family, including my eldest girl’s boyfriend, Cathal, for a week at Easter. Michael and I were celebrating 30 years of marriage on May 2, however, Easter suited everyone so we booked for then. We arranged Holy Mass and renewal of our wedding vows and were blessed beyond belief to do this in the city’s cathedral, Cattedrale di San Pietro surrounded by our family, Áine, Ciarán, Roísín and Aoibheann, Cathal, a few of Ciarán’s uni pals and another friend of both his and Roísín’s from Glasgow, Jamie Sweeney who was travelling around Italy and mentioned he may come visit us.

Now this is where the story becomes intriguing. Jamie’s grandfather is the recently departed, former Chairman of Comhaltas, Fred Sweeney, however, Ciarán and Roísín never made the connection because Jamie didn’t play music with St Roch’s or attend Irish classes. Needless to say I acquired this information within five minutes of meeting Jamie. So what Sweeney’s are ye? Who’s yer Dad? What part of Donegal are ye from? The poor boy must’ve felt like he was on an Irish version of University Challenge. I knew his grandparents well and told him how respected they were in the Irish community and the marvellous work Fred did with Comhaltas and the Glasgow Feis throughout his life. All I’ll say is the craic was so good Jamie stayed for two nights instead of one and got to celebrate our wedding anniversary with us.

The Mass itself blew us all away. It was all in Latin (sung). If I were to use a record as an analogy it would be an ‘Unplugged, Acapella, 12 inch version’ of Mass. The priest expláined to the congregation Ciarán was studying in Bologna and how we’d decided to celebrate in their wonderful city. Afterwards people approached us to say, ‘Congratulazioni!’ I think they thought we had about ten children which was hilarious.

Afterwards we went for an Aperitivo and at some point Michael and Cathal—Áine’s boyfriend—disappeared which I hadn’t noticed as I was too busy gabbing to Ciarán’s uni pals. When Michael re-entered the room his smile was as wide as the Shannon River and he was fit to burst and announced that Cathal had just asked for Áine’s hand in marriage. We were all cheering, hugging and crying. Jamie’s’ Aperol spilt all over him and the table and we couldn’t quite believe our day could get any happier or more memorable. I did wonder had Cathal had a wee rub at Juliet’s boob because he couldn’t quite believe his luck! That was Easter and the proposal took place on June 18.

On Palm Sunday we walked—well climbed—to The Basilica of the Madonna of San Luca . It’s a steep climb, not for the faint hearted, under cover of the longest arched walkway in the world—3.8 kms—but it was worth every breathless pant when we stood at the top of the sanctuary looking out at the football stadium, the towers and the Basilica of San Petronio which contains the world’s longest meridian line. San Luca is a stunning basilica and it was a beautiful Mass, but something I found odd was they heard Confessions throughout Mass. One lady was in for at least 30 minutes as a queue of disgruntled parishioners imploded with impatience. I leaned into Michael and whispered: “I think she’s murdered her husband!” Or some other paralleled heinous sin that required such a lengthy Confession. We had a quiet chuckle.

So, Bologna. A veritable mecca if you love Italian food. Basilicas/cathedrals/churches in abundance, Aperol spritz, museums, Modena made balsamic vinegar, students—it’s an absolute buzz! I’m wondering should I perhaps be considering a career as a travel writer?