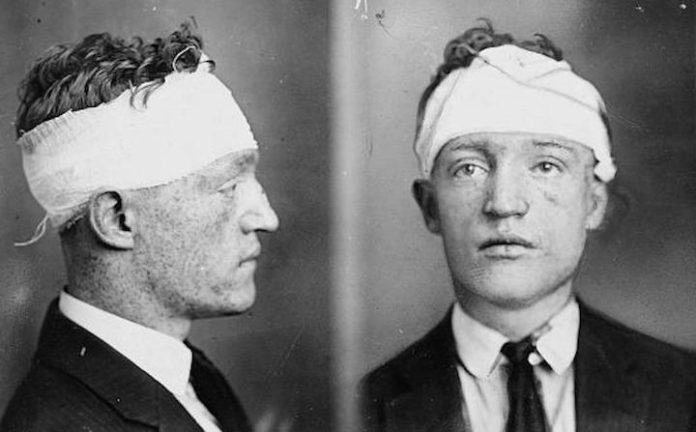 IN THE criminal fraternity, many underworld figures are known by nicknames and one of the most memorable in the Irish American gangster lexicon has to be that of Richard ‘Peg Leg’ Lonergan, the one-time leader of the New York Irish criminal group the White Hand gang.

Richard Lonergan came into the world on January 16, 1900. He was one of 15 children born to Irish emigrants Mary and John Lonergan. Nothing much is written about his siblings other than one sister Anna Lonergan who became known as the ‘Queen of the Irishtown docks’ and who would later marry his close friend and fellow gang member Wild Bill Lovett.

Richard was raised in Irish Town, an impoverished Irish-American enclave between the Manhattan and Brooklyn waterfront. His early life was traumatic and he did not enjoy a happy childhood. His father—a noted bare-knuckle boxer–was a member of the Jay Street gang and a heavy gambler. Also a heavy drinker he regularly abused his wife and children.

When Richard was just 13, his mother Mary was charged with the murder of his father. John Lonergan attacked his wife in a drunken rage and drew a gun intending to murder his wife. Mary fought back and in the ensuing struggle, the gun went off and John Lonergan lay dead. Mary stood trial for murder, but gave a plea of self-defence and was acquitted by the judge.

It was in this maelstrom of poverty and abuse that Richard turned to crime, joining local street gangs and taking to robbing passengers on rail cars and trolley trams. It was during one such robbery, that he escaped an early death. Fleeing the scene of the crime he fell under a trolley car and lost his right leg. His injury meant he received not only a prosthetic leg but a lifelong nickname ‘peg leg.’ Despite this, Richard still earned a fearsome reputation in Irishtown and on the Brooklyn waterfront as a vicious street fighter.

Business and gangland beginnings
However, while vicious in nature he was also an intelligent and a shrewd businessman. He once received a bicycle but couldn’t use it because of his leg. He started to rent his bike to others in his neighbourhood and with the money he earned he bought a couple of new bikes. He eventually started a bike shop where he sold and rented bikes.

Even as young man his hatred of Italian Americans was well-known. This stemmed from an incident at his bike shop when a Sicilian gangster approached him to sell drugs. While not adverse to the drug trade, Richard refused as this would insult fellow Irish gangsters and he viciously beat the man. The Italian wasn’t too pleased with this response and he used mafia police connections to close him down, on the excuse that he was selling stolen merchandise. Richard lost his store and had to work on a farm. There his hatred of Italians simmered and he met and befriended Wild Bill Lovett which would change his life forever.

Richard (above) introduced his new found friend to his sister Anna and she and Bill were soon married. Both Richard and Bill became members of the Irish White Hand gang under the leadership of Dinny Meehan. The White Hand gang was one of the most famous Irish American gangs with a short, but bloody history.

The White Hand gang was the coming together of a number of existing Irish American gangs such as the Frankie Byrne gang, Jay Street gang and the Red Onion gang. They organised themselves to benefit from the lucrative waterfront rackets and to resist the growing influence of the Sicilian Black Hand Italian mafia, who enviously coveted  the wealth that could be made along the New York and Brooklyn shoreline. The driving force behind the creation of the White Hand gang was Dinny Meehan, a folk hero in the slums of Brooklyn.

From 1900 until 1925 a continuous war raged between the White Hand gang and the Italian mob along the New York waterfront. The White Handers retained a firm grip on the Brooklyn Bridge–Red Hook sections and collected tribute from barge and wharf owners. Those who declined to pay saw their wharves and vessels looted, burned or wrecked. All longshoremen had to pay a daily commission for the right to work. Some paid willingly because they were Irish and saw their salvation in the vows of the White Handers to keep the docks clear of Italians.

Rising through the ranks
Peg Leg rose quickly through the White Hand gang, becoming its number three, chiefly due to his vicious reputation and the fact his brother in law Wild Bill Lovett was now the number two to Dinny Meehan. Dinny Meehan, whilst only 23, was old school and concentrated on collecting tribute from ship captains and factory bosses.

Peg Leg and Wild Bill saw great potential in prohibition and urged the White Hand gang to expand into this lucrative market. Meehan disagreed and a feud began to simmer between the men and would soil boil over into violence. On the evening of March 31, 1920, Dinny Meehan was shot multiple times while in bed with his wife Sadie (who was wounded in the shoulder). No one was charged for his murder, but everyone knew it was ordered by Richard Lonergan and Wild Bill Lovett.

For the next two and half years Peg Leg was the strategist and Wild Bill the executioner as the White Hand gang grew its bootleg operations and fought a bloody war against the Italian Black Hand faction. Wild Bill’s reign as the head of the White Hand Gang ended on November 1, 1923. He was shot several times before being hit over the head with a meat cleaver by a Sicilian hit man Will ‘two knife’ Altieri.

Peg Leg now took the helm of the White Hand gang, determined to avenge his friend and drive the Italian mafia from the waterfront. A brutal three years followed, with massive profits flowing into the gang’s coffers and the body count constantly mounting. The Italian mafia looked on nervously and decided Peg Leg had to die. They turned to an old enemy of the White Hand gang, Al Capone. Frankie Yale—head of the Black Hand gang—went to Chicago and put a proposal to Capone.

Death and aftermath
In December 1925, Al Capone took his son Albert to see a New York specialist to treat his mastoid infection. On Christmas night, while his son recuperated after the operation, Capone decided to take a trip to one of his old haunts the Adonis Social club, a South Brooklyn speakeasy owned by the mafia.

That same night Richard and his gang also decided to pay it a visit. He led a contingent of his men into the Adonis Social Club, This was a deliberate visit to cause a fight with mafia soldiers. Around 10pm Peg Leg and five of his men entered the bar. According to witnesses they were in high spirits, rude and aggressive to other patrons. In contrast Al Capone and his associates sat quietly at the back of the bar.

A fight broke out between Richard and three Italian men who had Irish girls on their arms.

Seeing two Irish girls dancing with Italian gangsters, Peg Leg kicked them out of the place, ordering them to ‘get back with the white men.’ Suddenly, the lights were extinguished and gunfire was heard. In the melee, panicked customers ran for the exit. Glasses shattered, tables flew and chairs were overturned.

When the lights came on a scene of carnage was unveiled. The police quickly arrived and found one of Richard’s men lying dead in the street. The trail of blood led into the club and police officers found Peg Leg and his associate Cornelius ‘Needles’ Ferry on the dancefloor, shot through the head in typical mafia execution style.

A fourth member of the White Hand gang, James Hart managed to escape, having been found a few blocks away crawling on the sidewalk after being shot in the thigh and leg. He was taken to the Cumberland Street Hospital where he eventually recovered, but refused to cooperate with police. He denied being at the club claiming he had been shot by a stray bullet from a passing car.  The two other members, Joseph ‘Ragtime Joe’ Howard and Patrick ‘Happy’ Maloney, were apparently unaccounted for leaving no witnesses willing to testify.

Seven men were arrested in connection to the shooting, including the visiting Al Capone, all were released on bail and the case was eventually dismissed. The killings are generally attributed to Capone, in partnership with Black Hand boss Frankie Yale. However, the police could not substantiate reports that Capone had personally killed Peg Leg and had to drop any prosecution of him. Capone himself insisted he had had nothing to do with the killings, declaring: “I never met an Irishman I didn’t like.” However, on his return to Chicago, Capone continued his extermination campaign against the Irish O’Banion Gang.

Al Capone was there. And it is true that he was arrested and questioned for the triple murder, since he was in town for his son’s surgery. The fiercest Italian criminal of all time, who was once banished from Brooklyn by the Irish-American White Hand gang, had now exacted his revenge and essentially put the gang into the history books. The New York Mafiosi were grateful for Capone’s assistance in Brooklyn, many believe that if Capone hadn’t triggered the violence, Peg Leg and his cohorts might have walked out safely. As it was, the White Handers had been stripped of their last important leader. The Mafia now began to exert greater control over the Brooklyn waterfront.

With the death of Peg Leg Lonergan the White Hand gang began to disappear from the Brooklyn waterfront allowing Frankie Yale and eventually the Mafia’s Five Families to take full control.

John Joe McGinley is the author of The Irish Wise Guys, a no-holds-barred book focusing on the most notorious Irish American Gangsters, crime bosses for whom death and destruction was a daily currency in their lives. To order a copy—priced at €20 (inclusive of postage and packaging)—visit: http://www.irishwiseguys.ie