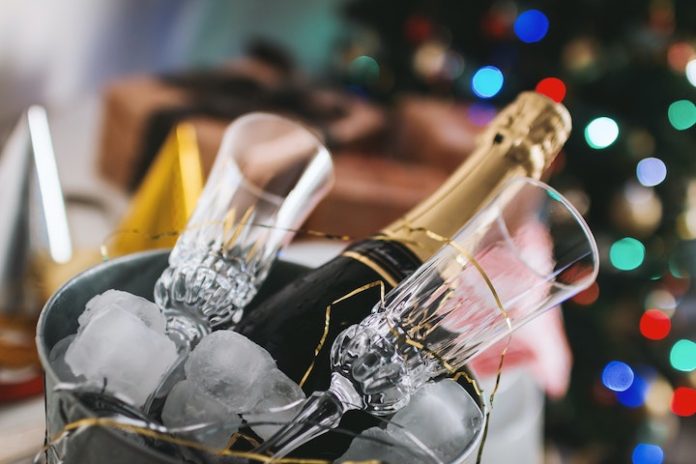 NEW Year conjures up a million moving images that to this day still bring a smile to my face. A blanket of smoke resting mid-air in the living room where Granja Kelly puffs on one Kensitas Club after another, the ash sometimes falling on his new M&S Christmas cardigan—or geansaí as he called it—but would swiftly be flicked off before anyone saw. He always took charge of emptying the bins before the bells—it was essential our rubbish was cast out as we began the New Year, not taking it with us. The overhead pulley in the kitchen was stripped of clothes too. No good housewife worth her salt would be caught with a washing still hanging overhead going into a New Year. My granny would be in the kitchen wielding a rolling pin over a rectangle of puff pastry, looking like she could potentially use it as a weapon if anyone dared bother her. This was her domain. A huge lump of ham swam in a vast cauldron of orange lentils, carrots, leeks and turnips, and in another pot there must have been a few pounds of slow stewing steak for the pie. Steam stained our kitchen window for at least two days as she chopped, sliced and stirred.

The tenement close reeked of bleach; the grey concrete shone after being mopped clean by our neighbour whose turn it was. She’d stand at the close door, her hair rollered and scarfed in preparation for her Hogmanay visitors, a fag teetering on the edge of her tacky bottom lip, plunging and twisting the head of the roped wooden mop and then taking a moment to draw on her fag and admire her hard graft. Small groups of men scarpered home from the pub with their carry-outs in flimsy blue plastic bags—half a dozen cans of McEwans Export and a bottle of Bells Whisky—and if their wives or girlfriends were lucky maybe they’d get a wee Babycham or two. Us weans were allowed to stay up for the bells and we’d watch Andy Stewart or the Alexander Brothers whilst supping Alpine’s lurid coloured limeade or American Cream Soda—tooth rot in a bottle—and eating cheese and pickle on cocktail sticks and cheesy puffs. We’d be bathed early and dressed in new nylon nighties, being warned not to sit too close to the electric four bar fire for fear of going up in flames. I used to love watching the little fan go around as it created an orangey red flickering glow off the fake coal pieces—this was ostensibly a mould of plastic that simulated an open fire. I’d sit in a dwam until my legs developed a purplish pattern, ‘Tinkers Tartan’ I think they called it.

Grandparents, aunts, uncles and cousins gathered around the TV as we waited for Big Ben’s Bells. The adults drank and sang and the records went on. Chuck Berry’s My Ding-a-Ling was number one in the charts and dad played it incessantly. It wasn’t until decades later that I read they tried to ban it on the grounds of indecency… and yes, I have to admit it, those lyrics were fairly questionable.

New Year’s Day always began with morning Mass, regardless of how late we got to bed we’d be taken across the road to St Albert’s Church. Strangely enough this is a tradition I’ve held onto throughout my life. Most New Year’s Days, even as we all grew older and had partners of our own, were spent with my Kelly cousins and my uncle Danny’s best and oldest pal Eugene O’Brien would always call in and regale us with the Pretty Little Girl from Omagh in the County of Tyrone, all the while stomping his foot deep into the heavily patterned brown and beige carpet. My cousin Anne did a wee Irish dance, my sister would get the guitar out and sing Christy Moore’s Ride On and The Streets of London and we’d entertain ourselves playing daft games and having the best of craic.

When my own kids were still very young I scrubbed both them and the house from top to toe, prepared some party food and we’d all snuggle around the fire and TV waiting for the bells. When we lived in Donegal the locals would gather in Beattie’s pub, but despite our neighbours pleading with us to go, we never did, preferring instead to stay home with the kids as they were still young.

One year my sister, Joanne, and sister-in-law, Maria, their husbands and kids all came over to spend New Year with us. Ireland was being battered by a storm which arrived right in the middle of our preparations for a Nigella-inspired turkey recipe, which Maria had brought over on the boat —along with a turkey the size of a dog! All I remember was it involved oranges, and lots of them. We steeped the bird overnight with a dozen oranges then shoved a couple up its ass for good measure. It was half way through the cooking process that the power went out. Holy God. There were 16 of us for dinner the next day and we were literally plunged into darkness for the entire night. Thank God we had plenty of candles. The kids were hysterical when the high hoarse winds took the trampoline; lifting it like Dorothy’s house and dropping it—now a mangled mess—in our neighbour Seamus’s field where it was discovered two days later.

When the storm eventually passed we lit some lanterns, wrapped the kids up and took them out for a moonlit ghost story walk. Hubby and his sister, Maria, succeeded in scaring the bejaysus outta them by telling stories of pokers flying across rooms and some ghostly presence coming into their grandparents’ cottage when they were kids. Needless to say the kids squealed and shrieked all the way home.

After that there wasn’t much else for it but to go to the pub. The boys went first for a couple of hours, then us girls headed over once they returned for babysitting duty. This was to be my first ever time in Beattie’s Bar in the remote, but most definitely not sleepy village of Carrowmenagh, and oh boy what a night! No storm was going to stop this crowd of Irish revellers from enjoying themselves. In saying that, I think we caused a bit of a storm ourselves that night—three glam Glasgow girls blowing in on our own and asking for a bottle of Sauvignon. I distinctly remember the barman hunkering down to the bottom shelf and wiping the dust off three small bottles with a tea towel. I knew after the first sip that it wasn’t a good year, but after the day that was in it I drank it back with the knowledge that clearly there weren’t too many little old wine drinkers like me in Carrowmenagh. Local man, Anthony McGonigle sang and played guitar and his sister, Elaine, sang The Sally Garden, making my entire body prickle with goosebumps. To this day I’ve never heard it sung better.

So there you have it, some of my finer, funnier memories of New Year both in childhood Glasgow and adulthood Donegal. It’s a nostalgic time. A time when we ponder the past and think fondly of loved ones who are no longer with us. I’m not big on New Year’s resolutions. I believe that if you want to make changes in your life you can do that any time. If you want to get fit, do it now! Learn a language? Do it now! Quit smoking? Do it now! Be honest? Do it now! We all have the ability to improve at any time. To be a better person. To let go of hatred, whatever is on your wish list.

So here’s to a Happy New You in 2022. Sláinte. And don’t wait to dust off the Sauvignon!